In the battle of the Michelin-starred restaurants in Berlin, Hugo’s takes the high ground – literally. Perched on the top floor of the Intercontinental Hotel, the restaurant has sweeping views over much of the city, including many of its landmarks – the Victory column, nicknamed ‘goldelse’, in the Tiergarten, the early evening sun making its huge brass statue of Victoria on the top glint ferociously.

It’s also easy to see the Reichstag, the Berlin communications tower and the steel and glass buildings down on Potsdamer Platz – take that, Facil (see the blog Wool pig and Bison? Simply Facil).

Even though it’s hard on the constitution, it’s interesting to visit top restaurants in a city back to back – it certainly makes comparisons much simpler as the previous meal is still relatively fresh in the mind. Greedy Girl and gluttonous husband opted for a four course tasting menu at Hugo’s, with one variation for Greedy Girl. More on that later.

Shown into the long, thin dining room, the view is a delight for visitors although our waitress admittedly cheerfully she doesn’t really notice it any more, “unless there are rainbows”. Awww.
Gluttonous husband ordered a glass of riesling – one of his stated objectives to fulfil in Germany, and Greedy Girl went for a glass of blanc de blancs. Roll on ‘les amuse bouches’.

The first was an Asian inspired trio – a shredded veal and noodle salad laced with chilli and coriander, a veal ‘ball’ coated in crunchy potato sticks and then, oddly, a salmon and lobster sushi roll. The next little treat was ‘char fish’ – this is apparently an Arctic sub-species of salmon. It was warm but barely cooked (thank you, Greedy Girl exclaimed), served with cucumber and a dill cream sauce poured over the top. Very nice indeed.

And so to the main menu, accompanied by a bottle of German red wine – a Lemberger from Germany’s south west. A step up from Pinot Noir and not as full on as a cabernet, our sommelier explained. Good show.

First course was the chef’s take on foie gras – presented three different ways. A cube of delightfully soft goose liver was dusted with cocoa powder and a salty cashew on top. A ball of foie gras was coated in finely ground coffee for a different take. Finally there was a small slice of foie gras grilled with pepper and on a bed of fruity sauces. A quenelle of mango sorbet and some greens completed the plate. It was very pretty and pretty tasty. 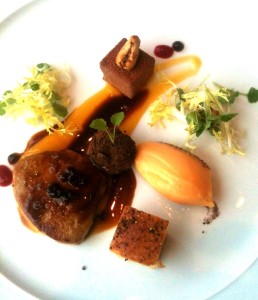 Second course was where Greedy Girl deviated from the norm. Gluttonous husband went with the standard white halibut with asparagus and parsley emulsion. Greedy Girl, having had her fill of asparagus for a while, asked to swap the dish for the fried octopus with tomato, potato and sauce vierge.

Frankly, the halibut looked a bit bland. It was perfectly cooked but had no real ‘wow’ in either presentation or in the mouth. The octopus, on the other hand, was extraordinarily good. Served on a bed of green tomato jelly, there were also slices of artichoke, the tiniest red tomatoes still on the vine that popped with flavour and the very yummy sauce (for the uninitiated, it is made of lemon juice, olive oil, chopped tomatoes and chopped basil). Score one for Greedy Girl. An unqualified yum.

Next up was a veal dish (pictured at the top of this post). Veal from Mecklenburg-West Pomerania (in the far north-east of Germany we were told). This was a dish of two halves; the veal was topped with a slightly grilled disc of bone marrow and sat on a bed of fresh baby peas. On the other side of the plate was a ragout served on cauliflower puree. Even though the veal came out with a rather unappetising ‘grey’ colour on the side, it tasted heavenly. Greedy Girl didn’t really go for the ragout, but gluttonous husband (bless him) did his human hoover routine once again and polished it off.

We asked for the dessert to be held off until we finished the wine but we really wanted it to get dark enough to see the lights twinkle over Berlin. Given our position in the northern part of the world, it doesn’t get dark in summer here until well after 10. We were underwhelmed by the lights, once they started to show through, to say the least. The victory statue looked better lit by the sun than the weak spotlights.

A pre-dessert was served – a sorbet with crunchy apple pieces and a Granny Smith (Australia’s fruit gift to the world) soup poured over the top. Greedy Girl gave it a resounding thumbs down. Not at all pleasant. Gluttonous husband … well there’s no need to really overstate the point here, is there?

And so to the actual dessert – rhubarb, strawberry and yoghurt was how it was described on the menu. A very strange-looking white ‘souffled’ parfait with a spongey look to it, sat atop the poached fruits. A slick of orange-rhubarb infusion was poured over the top, causing the sponge to crumble.

The strawberry was very nice – fresh strawberries are on sale everywhere in Berlin at present – but the rhubarb was hard and a little bitter for Greedy Girl’s taste.

While gluttonous husband partook of an espresso, the ‘petits fours’ trolley was wheeled up. We were able to choose our treats from an array of chocolates, tarts and friands.

Requesting a copy of the menu, to take away and remind Greedy Girl when it came to blogging, we were initially a little concerned that it seemed to be taking rather a long time. When it arrived, it was a touching little offering – a hand written menu on one side of a card with the chef’s signature and his sketch of his Michelin star. Cute.

Apparently Facil now has two Michelin stars and Hugo’s, headed by chef Thomas Kammeier, only one. Generally the standard of food was far superior at Hugo’s despite Greedy Girl’s picky criticisms. The battle between Facil’s young gun and Hugo’s long-standing prominence still has a way to go yet.