To paraphrase Star Trek (and to carbon date Greedy Girl), it’s Chinese Jim, but not as we know it. Flower Drum, in a paved laneway off Chinatown in Melbourne’s Little Bourke Street, has been the yardstick for Cantonese and Szechuan cuisine for nearly 30 years. Indeed, the original Flower Drum (a traditional Chinese dance, in case you were wondering) has been around since 1975 and moved to its present digs around 10 years later.

Perhaps rather than the Star Trek reference, it should have been more Star Wars, given on this particular evening (the fifth, sadly, not May the fourth …), James Earl Jones was seated at the next table with Angela Lansbury and their co-stars from the Melbourne production of Driving Miss Daisy, but I digress …

The banquet at Flower Drum is a gastronomic rite of passage for Melburnians and visitors alike. The menu is full of traditional dishes that are executed with a very high level of finesse. All the favourites are there – Peking Duck, siu mai dumplings, sang choi bao, spring rolls – but the flavours and textures are heightened, elevating humble plates to sheer delight.

For example, ‘siu mai’ dumplings here can be made with scallop. Sang choi bao is done here with quail. The spring rolls are made with soft lamb. On occasion, the fried rice is done with egg white and scallop rather than the full egg omelette and prawn. Little twists provide interest to frequent diners – and there are plenty of those, making Flower Drum still one of the toughest restaurants to get into on a Friday or Saturday night.

It’s also a hangout for movers and shakers. Previously Greedy Girl’s foodie friend Madame Lapine brushed shoulders with Barry Humphries (aka Dame Edna Everage) but it continually finds favour with foodies because of its unerring consistency over a long period.

The enormous reverence among the Chinese for ingredients is very evident here. One of the great treats you can experience is to order the banquet but leave its make-up to the imagination of your friendly waiter. Of course, you can rule in (or rule out) particular dishes.

Having been there quite a few times in recent months and, missing our customary waiter Barry (who for various reasons connects extremely well with gluttonous husband), we decided to revisit some old favourites on this visit. Having agreed on five courses, we opened a bottle of Pol Roger and settled in for a feast.

First up was pearl meat from Western Australia (pictured at the top of this post), very lightly fried with asparagus, garlic chives and spring onions, and served with two dipping sauces. On the right of the pic was standard oyster sauce and on the left, an anchovy sauce which was quite strong and – even by comparison to oyster sauce – incredibly salty.

The meat is essentially the main muscle inside a pearl oyster shell. The flesh is light and delicate; it has a slight resistance to the bite but is nowhere near as chewy as, say, abalone can be. Greedy Girl found it paired delightfully with the oyster sauce but the anchovy variety was too much. The vegetables were a lovely, crunchy counterpoint and ensured the dish wasn’t too rich. It succeeded on all counts – taste, texture, subtlety, freshness. Absolutely yummy.

Next was salt and pepper scallops, also from Western Australia. Two huge scallops, perfectly cooked, were very lightly crumbed and served on a bed of crispy fried enoki mushrooms, chilli and garlic. It was delicious but salt and pepper were not hugely in evidence; – unlike a dish we’d had several times previously at Flower Drum where fish fillets get dipped in lemon juice, followed by a dip in a powdery Szechuan pepper and salt mix. Still, they were very quickly dealt with.

After that, we moved to another signature dish, curried crab served in the shell. This is seriously good. Mud crab is shredded and mixed with a little coconut milk and turmeric to provide the lightest, creamiest curry you’ll ever try. It takes self-discipline to not pick up the shell and lick out every last remaining trace (and self-preservation as some parts of the shell are sharp enough to do significant damage to your tongue). The curry gives sweetness and interest without being overpowering. Some fellow diners in recent times, including a Chinese friend, have complained the food flavours are too subtle at Flower Drum. For Greedy Girl, who loves to taste all the flavours of a dish (rather than just heat), it was a perfect level of spice. 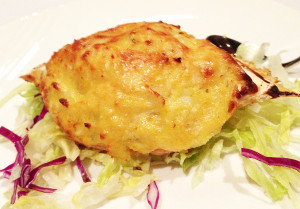 Peking duck has almost become a cliche, but there’s no denying Flower Drum does it with panache. Slices of duck, each with amazingly crispy skin attached, are brought to the table on a platter, where the waiters skillfully deposit pieces inside a freshly warmed pancake, add cucumber, spring onion and plum sauce, and fold to create perfect finger-food size parcels – with an added splodge of plum sauce on the side. The flavours and textures are out of this world. Juicy, tender duck, crispy skin, soft pancakes, lovely crunchy vegetables. If Greedy Girl wanted to be picky, it was that she found the plum sauce a bit too salty. Not much of it remained however, particularly when washed down by a mouthful of champagne. Sheer bliss. 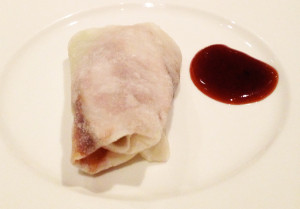 It didn’t seem like a lot of food but Greedy Girl was feeling decidedly full. On to the final course, steak with Szechuan pepper sauce – an oldie from the repertoire and a goodie. This was served with bok choy, crisp snow peas and a delightfully non-greasy fried rice. Gluttonous husband gets his steak still mooing. It made for a pretty picture but Greedy Girl preferred her dish which was still soft and tender while being cooked to medium.

It’s perhaps a heavy way to finish the meal, especially with the rice, but it’s arguably one of the best steaks you’ll have – anywhere. The sauce, dotted with black beans, is an absolute triumph. Levering a piece of meat, coated in the sauce, into the bowl of rice is a taste sensation. The vegetables, lightly wok-tossed, are crunchy and a perfect foil for the spiciness. As mentioned earlier, the rice has many and varied forms, depending on the kitchen. This version featured traditional ingredients of pork and prawn and a few crunchy slices of asparagus thrown in.
It was utterly delightful. Any thoughts Greedy Girl may have had of indulging in another savoury course – or even dessert for that matter – disappeared along with the last few grains of rice. It was time to focus on the remaining drops of champagne and contemplate a soothing cup of Jasmine tea to help settle the tum. 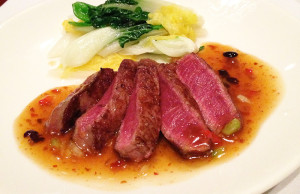 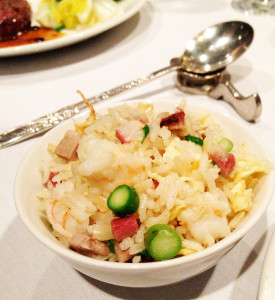 While the waiters looking after the movie-star table behind us created very impressive sugar work on top of a plate of toffee banana, we managed to chomp our way through the ‘non dessert’ – a plate of Flower Drum’s signature almond cookies. 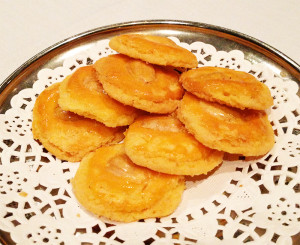 These butter, sugar and almond delights are tiny, crunchy and extremely more-ish. From time to time, Greedy Girl has been known to head home with a container of cookies to munch another day but, on this occasion, restricted herself (and gluttonous husband) to just two platefuls. The second plateful (pictured here) was bigger than the first (I swear). One remained as we paid the bill, a very reasonable A$125 each for the food, donned coats and prepared to exit. Oh, what the hell, it would have been rude to leave it behind.

Flower Drum is an amazing treat. Service is friendly, warm and blindingly efficient. The decor has barely changed in all the years Greedy Girl has been going there, but she always finds something remarkable about the food – mainly in terms of how the chefs can transform such basic Chinese dishes as scallop dumplings into feats of gastronomic excellence. It’s not for everyone – criticisms have included that the food can border on the bland, but Greedy Girl and gluttonous husband are big fans of the subtlety and pretty much hoover up every morsel.