What can we learn from celebrity chefs? 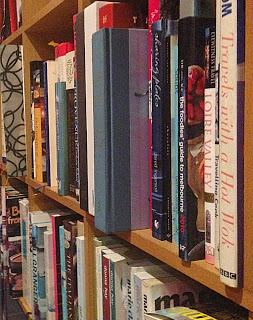 A small selection of our cookbooks

For the early part of their married lives Greedy Girl and gluttonous husband ate out – a lot. Home cooking consisted of a stir fry with bottled marinade from the supermarket, a pasta, or the odd roast. It was all largely foolproof stuff, driven in a big way by pre-prepared foods in the pantry (an exceedingly grand name for the overhead cupboards in our kitchen at the time).

And then came the TV chef phenomenon led, in Australia at least, by the ‘Naked Chef’, Jamie Oliver. While he eschews the name now, his show and accompanying cookbooks started gluttonous husband on his way to utilising the kitchen for more than storage. The way Oliver knocked up dish after uncomplicated dish just seemed so, well, easy.

Since then, Greedy Girl and gluttonous husband have preferred to save their cash to treat themselves to extraordinary meals in very fine restaurants, especially when travelling. A key reason behind the change is that gluttonous husband, through TV shows, cook books and the occasional cooking course, has increased his skill and repertoire to an amazing range. One of the best restaurants we regularly eat now in is our own apartment.

A major reason we attend fine restaurants is not only to fill our bellies with delicious treats but also to ‘dissect’ the food (verbally, that is) and discuss how the chef achieved such delightful results. It’s disappointing then, when one picks up the weekly Sunday magazine supplements in the newspaper and sees a ‘recipe’ from a celebrity cook essentially direct mere mortals at home to open various cans, packets and jars they’ve taken off the supermarket shelf.

Greedy Girl and gluttonous husband have no qualms about using little ‘cheats’ – store-bought frozen pastry being a major time and effort saver – but it was vaguely disappointing to see a recipe for a nice-looking caramelised onion tart with goat’s curd without getting the (very accomplished) cook’s thoughts on how to caramelise one’s own onions rather than scooping them out of a jar. Of course, going online gives the home cook a zillion recipes for almost every dish you’d care to name but part of the role of celebrity chefs or cooks, in Greedy Girl’s humble opinion, is to show how easy and (potentially) more healthy foods can be made from scratch.

Here are a few thoughts on some of the world’s great chefs and the ease of following their recipes. Gluttonous husband has several of the great Thomas Keller’s cookbooks and has delivered several of his signature dishes with style. Keller, a man of obvious high standards, has been able to impart his knowledge in a no-nonsense, easy-to-follow style that helps the home cook achieve excellent results. His thoughts on sous-vide cooking have been of particular value as gluttonous husband uses his 2012 Christmas toy, a home sous vide set-up.

Jamie Oliver, despite several media pundits trying to recreate his ’15 minute meals’ and failing to beat the clock as it were, has also barely put a foot wrong for home cooks. A recent favourite of his cooked with aplomb by gluttonous husband, is mushroom gravy with Yorkshire puddings, all done with a minimum of fuss to accompany a lovely steak.

British fashion stylist and accomplished cook Gok Wan showed a dish in his TV series Gok Cooks Chinese that is now on high rotation in our household – a sensational beef with black bean sauce served with wok-fried broccoli rather than rice. Gluttonous husband has actually combined two recipes here – the  black bean sauce learned at his cooking course with the great Melbourne-based teacher Elizabeth Chong and Gok’s tip of combining it with broccoli. It’s absolutely delicious, filling and the absence of rice isn’t noticed. Check out the blog here for a variation on another Gok recipe, for chicken and sweetcorn dumplings.

Gordon Ramsay’s TV show, Gordon’s Ultimate Cookery has thrown up lots of good ideas yet the first dish we tried – noodles with broccoli, chicken, garlic and egg – proved to be a bit of a disappointment flavour-wise. Having said that, there were plenty of good tips and tricks which gluttonous husband plans to put to use.

New Zealand cook Annabel Langbein’s series, The Free Range Cook is also a great resource. From watching ‘cheffy’ shows such as Great British Menu we’re more than aware that great chefs tend to have a weakness and that’s more often than not in preparing desserts. Langbein is just a great, all-round cook and her dishes have simplicity and flavour. A particular delight is what she terms ‘sticky buns’ – light, delicious cinnamon buns.

The series How to cook like Heston offered delicious insights into Heston Blumenthal’s approach to food. While we didn’t rave about his chocolate cake with passionfruit and pop rocks, we hope to attempt his triple-cooked chips sooner rather than later. See the blog here for a description of what it’s like to feast on Heston’s cuisine.

Gluttonous husband, like many home cooks, tends to follow the recipe as written in the first instance and then amend to his own style on subsequent occasion. One such example is great Australian cook Maggie Beer’s roasted macadamia nuts with rosemary. Gluttonous husband has found the snack to be very enjoyable (and slightly healthier) by using much less oil than the recipe requires. Likewise, in a great many dessert recipes (a meltingly rich chocolate fondant for example) far less sugar can be used. Our palate has changed over the years to prefer savoury over sweet tastes and we barely notice the dramatically reduced sugar.

Australian chef Bill Granger, from his range of cookbooks and TV shows, has also been a great influence, particularly with his recipes for corn cakes, and various puddings. Scottish chef Nick Nairn was also a great TV teacher, gluttonous husband tweaking his roesti recipe to great effect.

We’ve been lucky enough to sample the delights of Melbourne-based chef Shannon Bennett’s food on innumerable occasions and also have enjoyed his cookbooks, particularly his mushroom and truffle soup and delightful anchovy and parmesan twists – a tasty snack with a glass of champagne. While naturally Shannon prepares his own pastry for these, gluttonous husband cheats and tweaks his way through the recipe, using store bought frozen sheets and doing a variation with olives and tapenade. A tip though – don’t forget to take off the plastic separators between the sheets of pastry when you put them in the oven – the plastic isn’t a taste sensation!

Gluttonous husband has a digital recorder full of cooking shows and a burgeoning collection of cookbooks – everything from such bibles as Larousse and the Silver Spoon to the collection of Australian Women’s Weekly cookbooks Greedy Girl inherited from her dear mother. The more you cook, the more you have fun with cooking. The rise of the celebrity chef through TV shows and social media has played a huge role in getting people back into the kitchen – we can only hope they continue to teach us tips and tricks and let us come up with the cheats if we’re time poor.