This restaurant is now closed.
On the restaurant strip at Melbourne’s Crown casino, one of the nicer spots on the river front has long been occupied by Number 8. A noted destination on Sundays for its lunch special with ‘unlimited’ pour of champagne, the standard of food has always been more than acceptable. Now the restaurant, with chef John Lawson leading the charge, is about to raise the stakes even further.

On a cold August Sunday, Greedy Girl and gluttonous husband invited along some dear friends for a leisurely lunch. On offer was two courses for A$45, or three for $55. We determined we’d need to drink an inordinate amount to make the champagne pour (at A$130 per person) work in our favour, so we opted to do the food special, order a bottle of champagne and a couple of very delightful reds instead.

Number 8 is about to be reborn, our friendly waiter told us, as ‘No. 8 by John Lawson’, reflecting the chef’s efforts to make this more than a champagne-guzzling destination. This is set to happen by October 8, with the restaurant closing for less than a week to undergo the mini-transformation (largely cosmetic, with the slight rearrangement of the floor space to incorporate a small cocktail bar).

If the lunch offerings were anything to go by, Lawson is definitely on the right track. All dishes were scraped clean, including the many and varied sides offered as part of the deal. More on that later. After falling upon some lovely warm, crusty bread served with a seaweed-infused whipped butter, we eagerly awaited our first courses.
Greedy Girl had one of her favourites, a Wagyu beef carpaccio.

This doesn’t get much better. The carpaccio was deliciously tender and the toppings were a medley of beautiful flavours – a mushroom duxelle, soft, runny quail eggs, slices of parmesan, rocket and a basil pesto, topped with some lovely crunchy croutons. An unqualified yum. If ever you were tempted to try beef in its raw form, this is an incredibly tasty, less confronting way to experiment.

Gluttonous husband had a hiramasa kingfish ceviche. It was served with tapioca crisps and a smoked yoghurt. Ceviche essentially means the raw fish has been ‘cooked’ by marinating in the acid of a citrus fruit. There’s usually a bit of heat thrown in from some chilli. It’s a style widely used in central and South America and has gained huge traction in Australia in recent years – with good reason. It’s light, refreshing and enhances the flavour of the fish. Gluttonous husband was well pleased with the dish. 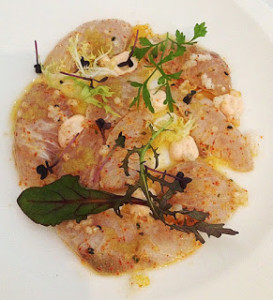 For his main, gluttonous husband chose a dish perfect for a cool day, a braised beef cheek with smoked potato puree and a red wine jus. It paired brilliantly with the wine, a Henschke Keyneton Euphonium blend from the Barossa Valley. The potato puree was very smooth but Greedy Girl didn’t warm to the smoky flavour. The red wine jus was rich and viscous – gluttonous husband mopped as much as he could from the plate with some of the sides – delicious sauteed mushrooms and some utterly delightful chipped potatoes. 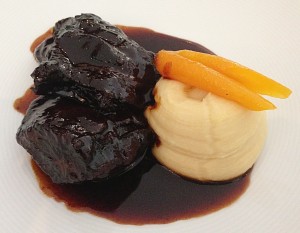 Greedy Girl went for the mushroom risotto, an oozy delight with three types of mushrooms (including some lovely and rarely-seen enoki mushrooms), topped by, ta da shavings of black truffle from Western Australia (a small, supplemental charge), pictured at the top of this post. Again, this was a very tasty dish, especially satisfying for a cold day. The Swiss brown mushrooms were added in big chunks to give the dish an extra texture. There’s not much, in Greedy Girl’s humble opinion, that isn’t improved by the addition of truffles and this was no exception.
Around the table, talk was slightly subdued as we attacked the food. Friends tucked heartily into a variety of soups (a very acceptable scallop, mussel and clam chowder) as well as a special celeriac veloute (served with chunks of celeriac cooked sous vide). Other delightful mains were a King Ora salmon fillet from New Zealand served on sweet corn ‘succotash’ and a dehydrated soy sauce ‘salt’. 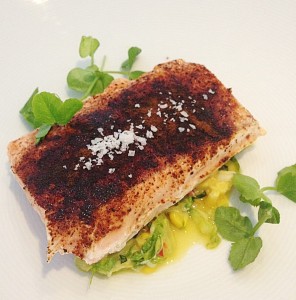 There was also a delicious lamb rack and belly, with lemon, rosemary and garlic. Each diner was offered their choice of sides. We had a couple of dishes of the mushrooms, a red witlof salad with blue cheese and a rocket and parmesan salad with yummy lemon dressing. The chips were a huge highlight. Crispy on the outside, soft and fluffy within – they were worthy of Heston Blumenthal’s triple-cooked delights.

The servings are all substantial and, sadly, this left us little room for dessert. Regretfully we paid the bill and headed into the rain, wind and cold.

John Lawson is definitely setting a high standard for what the Crown complex describes as its ‘modern Australian’ flagship restaurant. The style of the new ‘No. 8’ will be slightly less formal, with more rustic furniture and the removal of the swathes of white linen that currently abound. Greedy Girl will be there with bells on to see what comes next.