Japanese chef Tetsuya Wakuda has called Sydney home for more than 30 years and started his culinary odyssey there as a humble kitchen hand. It didn’t take long for Sydney’s restaurant luminaries at the time to recognise he had talent. Inside a decade, Tetsuya had not only opened his eponymous restaurant which has become a required experience for any self-respecting foodie in Australia, but was also recognised as one of the world’s elite chefs for the way he pioneered the fusion of Japanese and French cooking.|

Greedy Girl has been to Tetsuya’s in Sydney’s Kent Street several times and savoured every mouthful. Indeed, at the end of her first sojourn there, one Saturday afternoon, the great man himself came out to chat to the lunch stragglers. Greedy Girl commented that, when Tetsuya’s signature confit of ocean trout was placed before her she fully expected not to like it – not being a fan of ‘fishy fish’. It was so good, she told him, she could eat another, to which the delightful fellow immediately replied: “I’ll bring you one”. Hmmm. By that stage she had already wolfed down a dozen courses and shared in two bottles of champagne with gluttonous husband. She was fit to burst and had to regretfully decline the smiling chef’s kind offer.

So when Tetsuya spread his wings and opened Waku Ghin in the ritzy Marina Bay Sands in Singapore, Greedy Girl and gluttonous husband sought reservations. The settings could not be more different. In Sydney, Tetsuya’s is found in a very rare spot – a standalone low-rise building surrounded by an exquisite Japanese-style garden in the heart of the CBD. While there are a couple of smaller rooms, the dining area is dominated by a large main room overlooking the garden. In Singapore, Waku Ghin is on one of the lower floors of Marina Bay Sands, with the entrance overlooking the casino’s main gaming floor. Inside, it’s divided into a number of small rooms, each seating around eight people on high stools in front of a central food preparation area, or ‘teppan’.

According to the Waku Ghin website, the restaurant’s name is derived from two Japanese words – ‘waku’ apparently means to arise, as in water from a spring, while ‘ghin’ means silver. The silvery gleam was very evident the night Greedy Girl and gluttonous husband dined as we were shown to our little timber-panelled room and sat in front of the stone bench with its gleaming stainless steel teppan where a friendly chef produced virtually our entire meal before our eyes. As we were the only patrons initially in this particular room (which seats eight) we enjoyed the bonus of being able to chat to the chef throughout. The restaurant has two sittings – at 6pm and 8.30pm. We were up first, so it wasn’t exactly surprising that we had our little spot to ourselves so early in the evening. 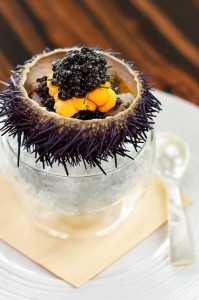 The major feature of Waku Ghin is its reverence for ingredients. No doubt the restaurant’s proximity to the casino attracts more than a few Asian high rollers and they would find much to impress them – sea urchin, abalone, caviar, just to name a few.

With a bottle of Jacquesson Cuvee No 733 resting in an ice bucket, we attacked the food. This blog has been written somewhat after our visit, so the menu will have undoubtedly changed, but first up was a flan of scallop with puree of bacon and spinach. It was light, perfectly seasoned and very tasty. A good start.

Next was one of the signature dishes – marinated Botan Ebi (shrimp) with sea urchin and Oscietra caviar. This is an incredibly dramatic-looking dish. One avoids the spiny fronds surrounding a pile of soft orange and white flesh, topped with the salty pop of the caviar. It was served with a special, tiny spoon made of mother of pearl which is said to enhance the taste of the delicate shrimp and sea urchin. It was enjoyable and certainly a very elegant dish.

We then moved to pan-fried fillet of Ayu, also known as ‘sweetfish’ because of the sweet nature of its flesh, a species native to Japan and the other Asian countries in that region. It was served with daikon, the very popular Japanese white radish, and fennel. While the skin was crisp, the flavours didn’t really dance for Greedy Girl who was looking for another element to make it really get her tastebuds going.

As you’d expect, fish and seafood dominate here – it’s fair to say that the approach to food probably leans to the Japanese rather than the French side of the ledger. Next was steamed Alaskan king crab with yuzu (Japanese lime) scented extra virgin olive oil pictured at the very top of this blog. This was prepared under a giant copper hood placed over the teppan. Gluttonous husband, our household’s resident cook, looked admiringly at the various accoutrements the chef used throughout the evening and this was no exception! Again, the dish was presented beautifully – in an incredibly understated way – cooked to perfection and devoured.

Waku Ghin sources its produce from basically everywhere. Next was another incredibly attractive-looking dish, Tasmanian abalone with polenta, tomato and garlic cream. This is Tetsuya working the fusion aspect in spades. Greedy Girl has long stopped being impressed by abalone – for the most part she finds it chewy at best and downright uninteresting at worst. This dish had a number of other counterpoints but she has yet to understand just what all the fuss is about with this most sought-after of, let’s face it, sea snails.

We continued with one of the restaurant’s other top dishes – braised Canadian lobster with tarragon. This was a yum. The pieces of lobster sat in a small bowl of beautiful broth. It sounds like a contradiction but it was rich, yet light and eminently slurpable.

The one concession to meat (apart from the bacon puree) was Japanese Ohmi wagyu roll from Shiga Prefecture, with maitake (a type of Japanese mushroom, known as the ‘king of mushrooms’ because it can grow to an enormous size) wasabi and citrus soy. Again, this dish has to be seen to be believed. Tiny marbled rolls of authentic wagyu beef are lovingly prepared and placed before you on a board. Sadly, they’re gone in a flash – they literally melted away in the mouth.

The final savoury dish was a consomme with rice and hirame (a type of flatfish). This is served in a traditional pottery bowl, with the little fish fillet surrounded by golden broth. What else can Greedy Girl say apart from the fact that it was incredibly pretty, if again not actually jumping out at her flavour-wise. We were then offered some Gyokuro, or green tea, to help digest before leaving our seats in the small room to be shown into the main dining area for our dessert courses.

There are lots of curved spaces and features (particularly light fittings) inside the restaurant. The main dining room is a dramatic looking space facing the water and, as we arrived there close to 8pm, it was perfect timing for the first of the evening’s light shows emanating from Marina Bay Sands.

The first dessert was granita of grapefruit with chartreuse jelly. It was reasonably refreshing. This was followed by Ghin cheesecake. As mentioned earlier, ‘ghin’ meaning silver meant there was a tiny frond of silver leaf on top of a round, citrusy cheesecake, dusted with icing sugar. Not too sweet, quite mousse-like inside. Greedy Girl’s tum, however, was definitely getting rebellious.

Finally (we thought) we were presented with chocolate mousse cake. This was, apparently, a little bit of an extra presented by the staff. This showcased the French side of the fusion. It was delish but we were struggling big time by this stage.
The light show having finished (and we could also see a very odd-looking whirlpool feature in a big glass container inside the shopping mall below), we were prepared to hit the road. Not so fast. There were still petits fours (presented in a beautiful little box) to go. Gluttonous husband sipped a coffee and we eyed the tiny delights with more than a little food fatigue. The jellies were at least light, the chocolate was dark and the meringue was crunchy. Gosh. Greedy Girl was fit to explode.

Off we waddled into the night, looking to have a reasonable walk to try to digest a power of food. While dishes, in Japanese style, aren’t necessarily all that rich (the desserts notwithstanding), the fullness factor just seems to come out of nowhere and give you a big wallop.

We left satisfied that the investment (considerable) was worth it for the experience. Would we go back? Possibly, although Singapore is such a hot spot for amazing dining, one tends to be spoilt for choice.

With thanks to Marina Bay Sands for providing the food photos used in this blog.