Even though it’s usually rather hot on Christmas Day in Australia, most of us descended from British or European stock observe traditions best suited to northern climes – especially when it comes to Christmas lunch.

Greedy Girl’s dear departed mother was a stickler for roast meats, roast veggies and gravy, followed by Christmas (also known as plum) pudding served with lashings of hot brandy custard. It was a big ask, during Greedy Girl’s childhood, to sit around the dining table as the mercury topped 30 degrees celsius wearing a paper hat from the bon bon and sweating profusely from too much hot food and too little air-conditioning.

Australia moved to decimal currency in 1966, but Greedy Girl’s mother insisted on another tradition – including sixpences in the pudding. This old British custom was said to bring wealth in the following year to the person who found them. The currency then was made of silver and safe to cook. Greedy Girl has kept the sixpence collection and dutifully adds them every year to the homemade pud – although she suspects now she’d be run out of Dodge because of the risk of someone choking or breaking a tooth.

So here’s my mum’s recipe, slightly modernised and simplified by gluttonous husband, that we prepare diligently every year. If you don’t have silver coins, don’t substitute modern currency – the alloys aren’t suited to being cooked. You can push some through the skin before serving if you want to keep the tradition alive, or some mints provide old-time coins specifically for inclusion in Christmas puds. And, of course, if you’re sharing this with young children, maybe it’s best to either avoid the coins altogether or make sure there’s none in the serving you give them. Having said that, Greedy Girl grew up on finding coins in her pud and she’s still here to tell the tale.

Roughly 900 grams of mixed dried fruit and peel (currants, sultanas, raisins).
You can buy individual dried fruits and create the mixture yourself or gluttonous husband is quite happy with a pre-mixed bag from the supermarket. The fruit is usually quite small but may need to be chopped if there are large pieces.
1 tsp grated lemon rind
2 tbsp lemon juice
100ml brandy
2 cups brown sugar
250 grams unsalted butter
6 eggs
1 and a quarter cups plain flour
Half tsp nutmeg (you can grate your own if you use nutmeg in other dishes or just get some ground nutmeg from the spice section in the supermarket)
Half tsp mixed spice
250 grams panko (Japanese breadcrumbs – they give a slightly lighter result than traditional breadcrumbs). 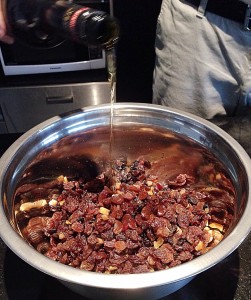 One of my favourite jobs. Pouring over the booze

Place the mixed dried fruit, peel and lemon juice in a bowl and pour over the brandy. This needs to macerate overnight at least so cover it and stir occasionally (it doesn’t need to go in the fridge).

Cream the butter and sugar and add the eggs one at a time, beating well. Then you just add this into the fruit mixture. Sift the dry ingredients and add with the breadcrumbs and mix well. 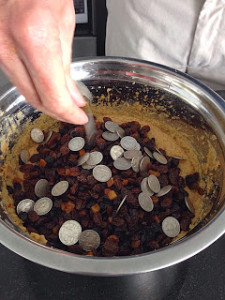 This is also the moment you’d add your coins and mix together well. Another tradition is that all people who eat the pudding should be invited to stir the mixture. Greedy Girl responded to the call. 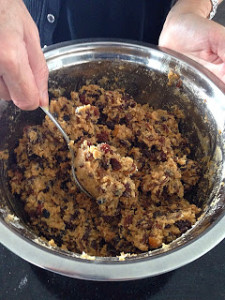 You need a pudding cloth, made ideally of unbleached calico (you can buy these from cookshops). The cloth needs to be boiled briefly – as you’ll see from the photo below, gluttonous husband makes sure he’s wearing rubber gloves to get it out of the pot. 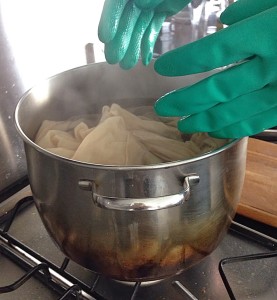 This makes the flour stick to the cloth. Spread it out over a flat bench and place another spoon of flour into the middle, to make a base for the pudding mixture. The cloth cools down fast so you can ditch the gloves. 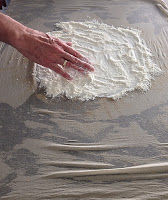 Use the cloth to line your pudding basin and make sure there’s plenty of cloth hanging over the sides. 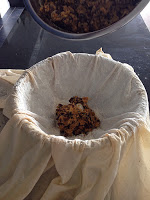 And you start spooning in the mixture. Pat down the top to make it even. 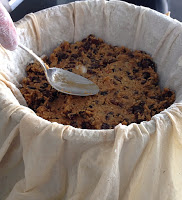 Pat the top down to make it even

It’s now time to shape the pudding. Grab the overhanging edges of the cloth and grasp it just above the top of the mixture. 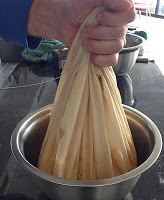 How to shape the pudding

Twist it and tie it tightly with kitchen string. 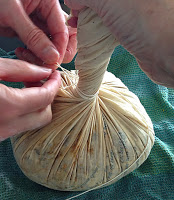 With the loose fabric, tie opposite ends together to create a handle – you need to hang the pudding after its first boiling.

It then needs to boil in a large pot for six hours. Gluttonous husband puts a little steamer attachment in the bottom of the pot to stop the pudding getting too much direct heat. He also rigs up an ingenious little construction of chopsticks to ensure the handle stays within easy reach and avoids the cloth just hanging loosely over the side of the pot and leaching precious boiling water. 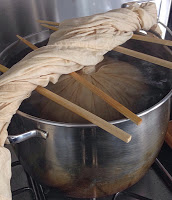 Stop the water from leaching out

While they say a watched pot never boils, you have to watch this to ensure the boiling water covers the pudding throughout this process. Keep a kettle boiled all the time and top up almost every 10 to 15 minutes, depending on the size of your pot. Just make sure the pudding is always covered by boiling water and you’ll be fine.

After the first boiling is through, it’s time to hang the pudding. It lets the cloth dry out and helps shape the pudding, which is quite soft after the boiling. We live in an apartment so we needed to be inventive to find a spot to hang – this is just over our laundry tap. The drying takes around 24 hours.

Once the cloth is dry, you need to open it and scrape away any loose flour that has accumulated where the cloth was tied – this can go mouldy if you don’t remove it. The flour on the bottom of the cloth is not a problem.

Wrap up the pudding again and it can now be stored, in the fridge, until the big day.

On Christmas Day
Take the pudding out of the fridge on Christmas morning. It needs to be boiled again for an hour and a half before serving. Gluttonous husband recommends you rig up the same steamer in the bottom of the pot and the chopsticks (or whatever method you like) so that the cloth ‘handles’ can be accessed easily. Make sure you keep the boiling water topped up.

It’s then ready to serve, piping hot, with lashings of brandy custard. Greedy Girl insists on carving the pud to work out which slice is likely to have the most sixpences! Again, if you’re using coins and you’re serving to young children, please exercise caution.

When the pudding first comes out of the cloth, it will be quite pale. Let it stand, uncovered on a plate for about 20 or so minutes before serving and the colour will also deepen.