One of the undoubted highlights of our first visit to NYC in 2011 was a night at Thomas Keller’s famed Per Se. Virtually impossible to get a booking through online channels, we rang the restaurant and begged for an opening. It was a magical evening. We were required to be seated by 5.30pm and nearly five hours later, we hauled our very full and satisfied bellies out the door toting a goodie bag of treats and the Maitre D’s card – if we ever wanted to come back, he said, just call him.

Sadly for us, he’s moved on from this Columbus Circle restaurant to ventures unknown. Still, we rang, we begged and got on to a waitlist. Happily, it cleared – we were in, and at prime time (8pm) to boot.

Some of the dishes at this esteemed prix fixe establishment were the same as last time – particularly the signature ‘oysters and pearls’ (see the picture above), but more on that later. The menu is fractionally more expensive now at US$310 per person and we opted not to take either of the supplement courses – a caviar dish and the foie gras. We’d only been in NYC a week by this stage but our bellies were already showing the strain of a big eating program.

The dining room at Per Se, which is on the south-western corner of Central Park, in the Time Warner building, is elegant and refined. On our visit, the gas fire was whooshing, being a coolish spring night. Shown to our table, we ordered an old favourite – a bottle of Pol Roger and settled in.

Per Se was ranked 30th in this year’s San Pellegrino world’s top 50 restaurants. While Thomas Keller is nominally in charge, since 2010, the kitchen has been helmed by Eli Kaimeh. There was a bit of a slide in ranking this year, down from 11th spot the year before. Despite that, our expectations were still sky high, having had such a wonderful experience on our previous visit.

The menu is fixed (although there is a vegetarian option) and you’re able to rule out any particular allergies or dislikes before you dine. Greedy Girl didn’t think to mention pigeon as a no-no while confirming our booking but our waiter said it wouldn’t be a problem to substitute that very gamey course with an alternative.

A couple of little elements to whet the appetite were presented first, a gruyere cheese gougere (puff) and the delightful ‘ice cream’ cornet. This is smoked salmon and creme fraiche in a tiny cone and utterly delightful. Greedy Girl gave gluttonous husband one of Thomas Keller’s cookbooks a while back and this was the first dish he tried preparing from it. Yum. 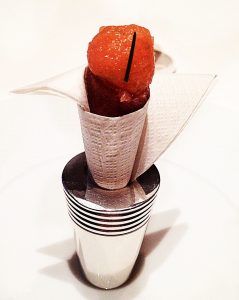 We were then into the menu proper. It starts with one of Keller’s all-star plates, ‘oysters and pearls’ (pictured at the top of this blog). Essentially, tapioca pearls are hidden under a creamy, light sabayon with butter-poached oysters from Massachusetts and a quenelle of Californian white sturgeon caviar. Greedy Girl isn’t an oyster fan; indeed the last time we dined at Per Se, she requested a replacement dish. After hearing the oysters had been poached, she was more than prepared to give it a go – and what a dish! Plate-lickingly good.

Next up was a salad of Hawaiian hearts of peach palm. A very attractive-looking plate, this was light and refreshing; the hearts of palm are literally harvested from the bud of a palm tree. It was combined with cider-infused strawberries, Belgian endive, finger limes, cherry bomb radish and a toasted English walnut vinaigrette. Lots of ingredients, some quite startling in the mouth. 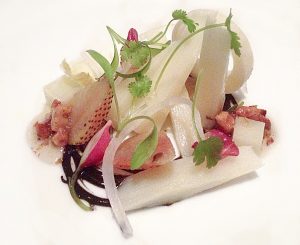 Next was the ‘confit’ fillet of Atlantic halibut. This was also a very attractive plate but didn’t wow, flavour-wise. Greedy Girl thought the peppers were too strong although she enjoyed the polenta, olive relish and basil – which the menu described as ‘African Blue’. This, apparently, is a perennial type of basil that doesn’t have seeds; it is propagated through cuttings. There is a plethora of exotic ingredients on show at Per Se. 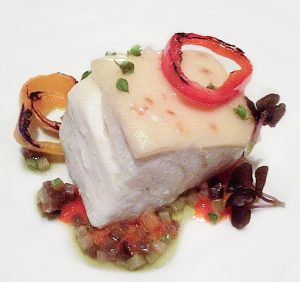 We were happily munching through our tasting menu, supplemented with a few delightful loaves of bread. Initially we were given a salted and an unsalted butter to try; Greedy Girl remembered a dish of various salts that was provided last time. Gluttonous husband enquired of the wait staff and we were told the salts accompanied the foie gras dish but we were welcome to enjoy them. Six different salts were presented in a multi-compartment china dish and Greedy Girl helped herself to her favourite – a Hawaiian black salt, sprinkled over the unsalted butter on a chunk of crusty baguette. Delish.

Next up was, arguably, the second best plate of the night (after the oysters and pearls). Butter-poached lobster. The lobster is from Nova Scotia and is served with intense cherry tomatoes, green beans, miner’s lettuce and ‘anchoiade’, a Provencal dressing made traditionally from anchovies, olive oil, white wine vinegar and garlic. Not a skerrick remained. 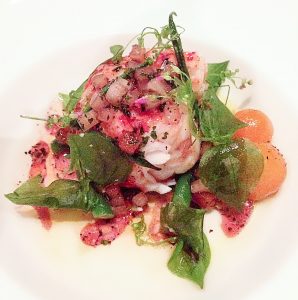 It was time to move to meat; gluttonous husband had the herb-roasted pigeon with ‘asperge des bois’, blueberries, spring onions, purslane and an aged balsamic jus. Again, a very pretty looking plate of food but gluttonous husband said the gamey flavour of the pigeon was very strong. Asperge des bois is a wild asparagus, most notably from the Pyrenees in France. Purslane is a succulent, which many in Australia consider to be just a weed. Apparently its nutritional value is extraordinary. 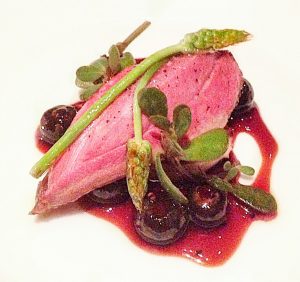 Greedy Girl was given pork belly. This was served with medjool dates and cauliflower. It was a nice-looking plate but the pork belly was incredibly salty. It did have a very nice crisp skin though. Greedy Girl ate a few mouthfuls before giving the plate to gluttonous husband. He concurred on the level of salt, needing the other ingredients to dilute it.
The final meat dish was beef. The colours on this plate were particularly vibrant and beautiful; Snake River farms ‘calotte de boeuf’ was charcoal grilled (and served very rare) with morel mushroom croquettes, thinly sliced new potatoes, fava (broad) beans and a bearnaise sauce was spooned over the meat at the table. It was described as ‘mousseline bearnaise’ on the menu and indeed it was very light and smooth. It was a very good dish but the morels didn’t pack much flavour; Greedy Girl and gluttonous husband have had morels twice this week and neither time did they excite the taste buds. Strange and sad. 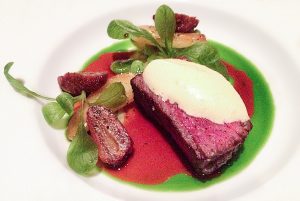 The main plates being over, we moved to a small cheese course. This was a gouda served with ‘Cara Cara’ orange, celery and romesco sauce. Apparently Cara Cara is a type of navel orange grown in California. It was a bit strange, in terms of flavour and texture. It desperately needed the celery for a counterpoint but both Greedy Girl and gluttonous husband agreed there wasn’t enough of it to go round. 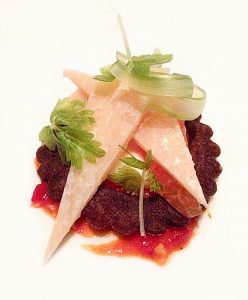 And so to desserts; there were three – fruit, ice-cream and chocolate. First up was fruit. This was rhubarb and yoghurt with elderflower. Greedy Girl had a taste and pronounced it fine but she’s not really a fan of yoghurt. Gluttonous husband polished it off. 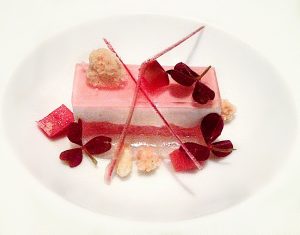 Next was ice-cream. This was incredibly soft and smooth almond ice-cream with pistachio, cherry and hazelnut. The ice-cream had also been drizzled with a line of honey which was quite subtle. Even Greedy Girl thought this was a good dish. There was a lemon gel and a citrus biscuit underneath that were both very welcome additions. 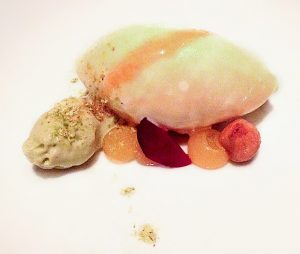 Finally (or so we thought), there was chocolate. This was a chocolate mousse with aerated caramel and puffed buckwheat. It struck a slightly jarring note for gluttonous husband, although Greedy Girl enjoyed the combination. 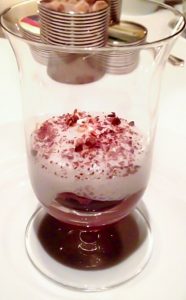 Asking for some green tea to aid with digestion, we were promptly offered the ‘chocolate box’ to choose as many as we’d like. This was a range of fruits, caramels and various styles of chocolate that you can see, are too many to list. Greedy Girl can remember taking the very bitter chocolate, a mint cream and a ganache, while gluttonous husband had a ginger variation, a cassis and a raspberry cream.

But there was more. A small steel tiffin box was placed before us revealing a variety of truffles (chocolate, salted caramel and ‘beer and brown bread’), nougat and caramels and macarons – earl grey and rhubarb. 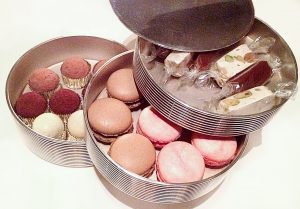 Weakly, Greedy Girl tried a chocolate truffle. The rest remained untouched. Just as well. Next to arrive were bowls of small doughnuts and berries and cups of an espresso ice-cream. This was sugar overload. We were literally stuffed and desperate to stand up, let gravity assist with the stomach contents and to start walking off such a huge amount of food. 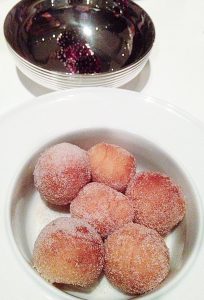 The food was very good, for the most part. There were a few dishes that didn’t really excite the tastebuds and while the extra desserts were a nice touch, we were in a calorific-induced haze by then and they just seemed to be piled on top of each other.

We paid our bill and were given one final treat; a tiny box of almond and chocolate biscuits ‘for breakfast’. It was all Greedy Girl could do to stop herself audibly groaning at the thought of eating anything more. 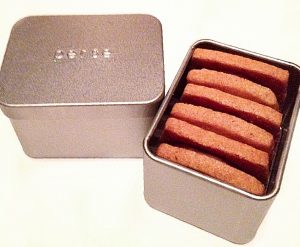 A word about the service. It was perfectly pleasant and efficient but oddly impersonal. Part of the enjoyment of dining for Greedy Girl and gluttonous husband is to interact with the wait staff, to learn more about ingredients and techniques and just have a bit of a chat – over the years we’ve found many great new venues by getting tips from those who work in the industry. Attempts to engage our team of waiters at Per Se were met with polite yet firm resistance. It was a big contrast to our first visit were we chatted happily with various team members.

Per Se is an extraordinary experience; Greedy Girl now believes she’s checked it off her list of three Michelin starred restaurants.