While the rest of the Shaw Centre, on the corner of Orchard and Scotts Roads in Singapore has been undergoing a prolonged refurbishment, one small corner has remained the same for a great many years – Les Amis.

This understated and elegant French restaurant was founded in 1994. It has done a brisk trade in the classics, with a few little Asian sensibilities thrown in ever since.

While other restaurants have come and gone, this one has endured. Indeed, the entire strip in this little side street on Claymore Hill is dominated by the Les Amis group, with five outlets – two French, one Italian, one Japanese and a wine bar.

The executive chef is now Sebastien Lepinoy, a protege of the great Joel Robuchon; Lepinoy replaced long-standing head chef Armin Leitgeb late last year, moving over from the group’s Michelin-starred Cepage in Hong Kong.
Greedy Girl and gluttonous husband had enjoyed lunch at Les Amis on several occasions, but such is the choice of dining available in Singapore, we hadn’t been back in a while. The prix fixe lunch is an excellent way of experiencing such high-calibre food at a reasonable price point. Settling in for the standard four-course lunch menu at S$55 (++), we anticipated a treat.

Helping ourselves to a glass of Bruno Paillard champagne and a Tiger beer (guess who chose which), we tucked into a bread basket. We sampled a very nice sourdough with walnuts and raisins, a crusty baguette, an orange-infused brioche and little sun-dried tomato and basil puffs. 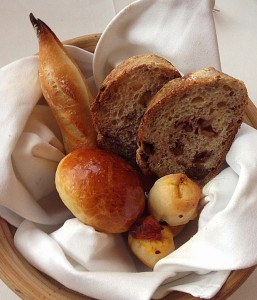 First up was, sigh, foie gras. The disc of foie gras had a few flakes of salt and pepper strewn on top and was served with crusty sourdough and a mango chutney. While Greedy Girl always prefers her foie gras seared, this was luscious – especially after it warmed a fraction. The mango chutney was perfectly edible but it was more of a savoury flavour than sweet – the latter going particularly well with foie gras. Greedy Girl made good use of the bread basket after the couple of tiny pieces of sourdough were used up. Delish. 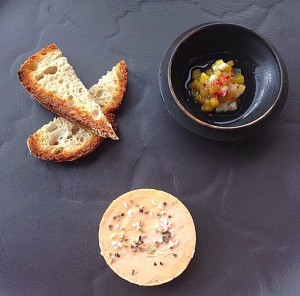 We then moved to soup. 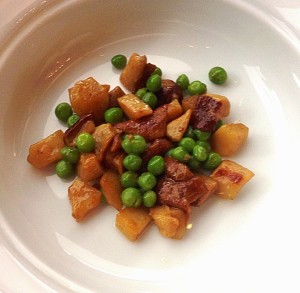 How the dish arrives at the table

It was a duo of cepe mushrooms (aka porcini) with petits pois. A cepe broth was poured over the top. 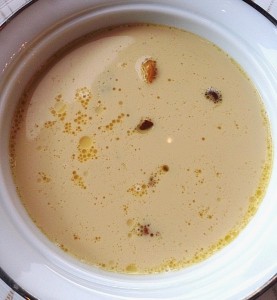 For such a light broth, it packed a power of flavour. The texture of the mushroom pieces and peas was very welcome. Having exhausted the supply of fresh baguette, Greedy Girl requested more to mop up every last drop of the soup. Another sheer delight.

It was time for our choice of mains. Gluttonous husband took the Scottish salmon. An exceedingly pretty plate of food, the salmon was served two ways – as a tartare mixed in with a little horseradish and topped with a few fronds of chives and some roe, and a delightfully undercooked fillet. Gluttonous husband was well pleased. 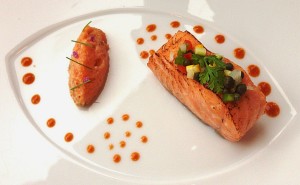 Greedy Girl, unusually for her, took the beef tartare – the incredibly pretty-looking dish at the top of this blog. It was served with individual jars of tomato sauce and mustard and a small ramekin of fries. The tartare was very soft and melted away. It was a tangy, spicy mix and the heat was enhanced by adding the Dijon mustard. Greedy Girl felt there was enough of a tomato flavour in the actual beef mix which had a vinegary tang from the capers. The edible flowers were a nice touch and tiny croutons gave additional texture. The little flecks of gold leaf were a touch of luxury. 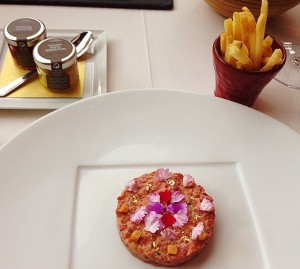 Having drained her champagne, Greedy Girl was prepared to be talked into a light red, when she spied one of her all-time favourites on the wine list – a Montepulciano from Tuscany. Specifically, it was a Carpineto, vino nobile di Montepulciano. The beautiful blackcurrant nose gave way to a soft, yet rounded flavour which worked extraordinarily well with the beef.

Gluttonous husband agreed the match was excellent. Being more of an aficionado of steak tartare, he commented the one flavour he couldn’t really discern here was the beef. Greedy Girl agreed it was pretty much just a delivery system for the other strong, yet well balanced ingredients. She savoured every last bit of the beef and the wine.

It was time for dessert. All the menu told us was that it was the pastry chef’s ‘dessert of the day’. Sigh. As far as rum babas go, it looked very attractive. Greedy Girl, not a fan of cream other than what’s cooked in a lovely sauce, tried the raspberry and a little of the boozy cake and handed the plate straight over to a pleased gluttonous husband who wolfed down both servings. Note to self: when the ‘pudding’ is not defined on a menu, ask, lest ye be disappointed. 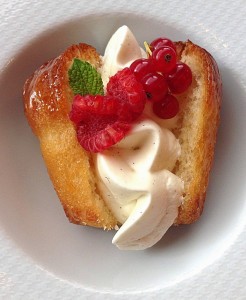 But we weren’t ending on a low note. Light, crispy, crunchy citrus madeleines were served with a very zesty lemon custard. Greedy Girl left gluttonous husband a taste. All that was left was a very enjoyable macchiato and we were done. 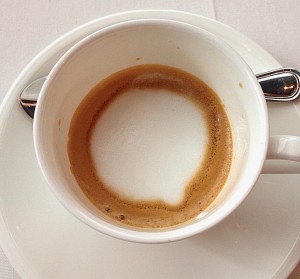 This was a perfectly lovely lunch (the cream-laden dessert notwithstanding) and a wonderful way of sampling the food under the relatively new direction of Chef Lepinoy. The tasting menus in the evening aren’t particularly inexpensive (the smallest degustation is currently S$160++ which isn’t outrageous but add the consumption of even a small amount of nice wine and the cost rises fairly steeply from there). Drinking good wine isn’t for the faint of budget in Singapore. Indeed, at lunch, Greedy Girl’s two glasses (one champagne, one red) cost more than the four-course menu.

It’s extremely high-quality cooking, with excellent service, in a very pleasant environment – that hasn’t really changed at all in its 20 years. A true lunch treat.