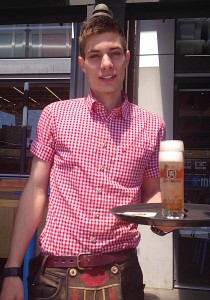 It’s been a very, very long time since Greedy Girl visited Munich. One of her lingering memories (apart from learning how to pronounce jugendherberge so she could find the way to the youth hostel) is whiling away a pleasant afternoon in a beer hall. Now, instead of travelling to the other side of the world, she and gluttonous husband just walk down the river in Melbourne to the Munich Brauhaus.

The South Wharf precinct (amazingly enough, on the south bank of the Yarra River) has taken a very long time to realise its potential. The enormous space occupied by the Munich Brauhaus was originally envisaged as a glam food court. Fitted out with shipping containers that housed individual kiosks, the area was virtually finished and ready for various cooks to move in. Nothing happened, until one day, the containers were gone and rumours swirled that it was to become a beer hall.

And what a beer hall – on a busy day one can sip from steins containing a litre of beer, surrounded by 900 of their closest personal friends. An outdoor area, featuring a profusion of bar tables, long benches and a few smaller tables was almost immediately jam packed – and the venue got going just in time for Oktoberfest. Indeed, its website proudly proclaims it’s ‘Oktoberfest every day’. Greedy Girl can well believe it.

Enjoying some spring sunshine, Greedy Girl and gluttonous husband took advantage of a early and relatively quiet lunchtime to sample the offering. While indoors was a haven of quiet, with only a few bar tables occupied, the available seating on the river banks quickly filled up. We ordered 300ml glasses of the Munich lager (their ‘house’ brew, done in an unfiltered, traditional ‘kellerbier’ style) and a glass of Franziskaner – from Munich’s oldest brewery, dating back to 1363. The name derives from the Franciscan monastery that was once on the site.

The wait staff, who seem to be predominantly European students on working holidays, are dressed in traditional German clothing (including very short shorts for the girls – a bonus in the summer but rather cool for Melbourne’s spring) and manage to weave their way through the tables and crowds bearing the giant steins. Sipping our beers, we tried to tune out the German pop songs and more traditional ditties blaring from the loud speakers and awaited lunch. 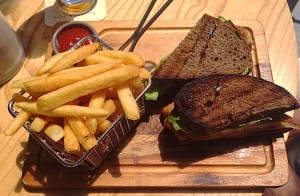 Served on toasted rye bread with smoked bacon, tomato, avocado and a Bavarian mayonnaise, it was perfectly tasty. There’s always the tiniest issue in eating something coated in breadcrumbs between another two slabs of bread but this wasn’t outrageously heavy. The mayo was very light and the rye bread particularly crunchy. It was served with some tomato sauce and nicely salted chips.

Gluttonous husband took a German hot dog (pictured at the top of this blog). Drizzled liberally with a tangy mustard, the smoked sausage was perfectly cooked and nestled in a bed of sauerkraut with some gherkins and a little diced tomato. It was nicely balanced; the only quibble is that the bread quickly disintegrated.

The Munich Brauhaus plays to its strengths – hearty food, good beers and the plates and glasses are generous. It looks to be a winning formula.