Brae: the buzz is well deserved

Ever since it opened just on a year ago, chef Dan Hunter’s Brae has been a sought-after destination for food lovers.  On a hilltop just outside the town of Birregurra in the Otway hinterland, it’s about an hour and a half’s drive from Melbourne.

It’s certainly more easily accessed than Hunter’s previous digs; a few years ago we’d been delighted by his food at the Royal Mail Hotel in Dunkeld, but less than thrilled with the four-hour drive to get there. While a day trip to Brae isn’t out of the question, we opted to stay in a nearby bed and breakfast so we could enjoy the experience to its fullest.

The summer tasting menu at Brae, which runs to 18 courses, is $180. While we opted to open a bottle of Ulysse Collin ‘Les Pierrieres’ Blanc de Blancs premier cru from Congy (not far from Epernay) to sip throughout, there is also the option of matched wines for $120 or, given the fact the restaurant is in the middle of nowhere and someone has to drive, matched non-alcoholic beverages for $60, featuring a range of juices and teas.

Hunter has a serious cooking pedigree. His CV includes head chef of the famed Mugaritz in San Sebastian, six years at the Royal Mail, where he transformed a sleepy Victorian country town into a foodie mecca, and was named chef of the year by The Age Good Food Guide in 2012. Brae, his first solo venture, opened in December 2013 and has already been lauded by critics, winning restaurant of the year in that same guide, as well as two Gourmet Traveller magazine awards – best new and best regional restaurant. Unsurprisingly, the wait for a table is rather long, particularly on weekends.

To celebrate gluttonous husband’s birthday, we scored a table on a relatively quiet Monday lunch before Christmas. We settled into a light, bright dining room with comfortable modern furniture, interesting art and a lovely ambiance (as you can see from the picture, above). On learning of the occasion, the sommelier kindly treated us to a glass of a local sparkling to begin – Blakes Blanc de Noirs from Deans Marsh, literally a few kilometres down the road. The area was a big drawcard for the chef, giving him the room to develop his own organic garden but also avail himself of some spectacular local produce.

And so, to the food. While the menu looks rather long, most of the early dishes are termed as snacks. Greedy Girl is delighted to report she didn’t feel at all bloated by the end of this extraordinary journey.
First up were salt and vinegar potato and burnt pretzels with treacle and pork. 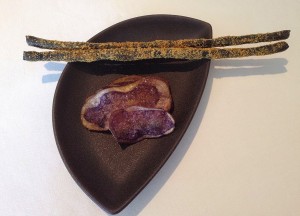 The purple potato crisps packed a real zing and, flaked with some sea salt, they were a great accompaniment to the first sips of champagne. The pretzels were quite extraordinary; they were blacked with treacle and coated in pork crackling crumbs. They were crunchy and very tasty. Gluttonous husband commented he could have had half the quantity but Greedy Girl would have been happy to eat his share.

Next up was a pretty-looking plate. 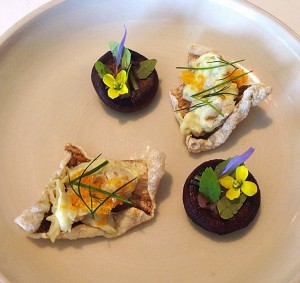 This was puffed hapuku and crisp skin, plus Otway shiitake mushrooms topped with eggplant and white miso. What can Greedy Girl say, except this chef knows how to ‘puff’. These little fishy delights were flavour-packed without being overly strong. The crispy, crunchy texture was an utter delight. Greedy Girl was less enthusiastic about the mushrooms, not actually being able to taste that ingredient but gluttonous husband enjoyed them. Quickly, they went down the hatch.
As is the custom of most restaurants, we were asked at the outset whether we had any dietary requirements. Greedy Girl isn’t fond of raw oysters and was about to open her mouth, but she decided the ‘iced oyster’ on this plate, could be handed over to gluttonous husband, for an extra birthday treat. Also on the dish were beef tendon and mountain pepper and ice plant with dried sake. 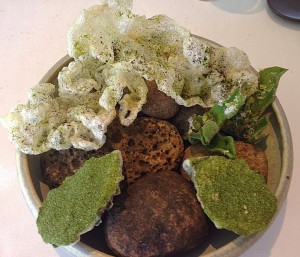 Worth the price of admission alone

These three elements were worth the price of admission alone. We were recommended to eat the oyster first, being told it could melt. Intrigued, we dug in. Underneath that green mottling was ice-cream made from the oyster brine. It was topped by freeze-dried seaweed and sherry vinegar. It was slightly sweet, slightly salty, quite intense and a revelation. The beef tendon was finger-licking good. Crunchy, salty, a little oily. It had the consistency of a prawn cracker but it was amazingly light. Absolutely delicious. The ice plant was a crunchy succulent coated with the dried sake. It was refreshing and very edible.

Next up were some elegantly spare dishes. First, asparagus. 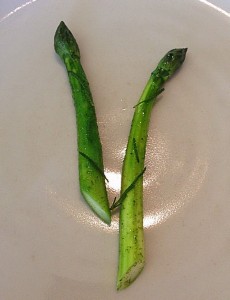 How to make asparagus minimalist

This was blanched and sauteed with sea butter and olive plant – the little flecks you can see on the top. It’s asparagus season here and while this was perfectly edible, it wasn’t a huge rave. The texture was a nice counterpoint.
It was followed by turnip and brook trout roe. 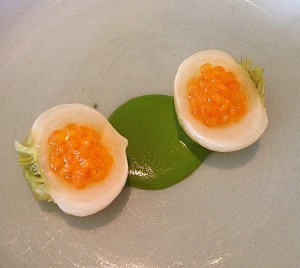 A salty hit here each time a trout roe popped

When one of the roe popped in the mouth it was an intense little hit of flavour. We wondered what the green emulsion was – it looked like pea but the taste didn’t match. It had been made by combining the green turnip tops with cream.

The final ‘snack’ was an unusual combination. 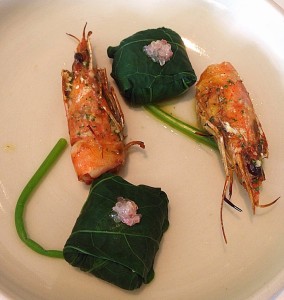 Described economically as prawn, nasturtium and finger lime, the waiter said, if we were brave, we could eat the whole prawn head, or merely suck out the flesh. Gluttonous husband happily chomped away while Greedy Girl went for the latter and it was undoubtedly the strongest-tasting prawn she’d ever consumed. Popping one of the green parcels in her mouth gave the dish a lovely fresh counterpoint.

We were then into the main dishes. First was calamari and fermented celeriac with barbecued peas and beef (bone marrow) fat. 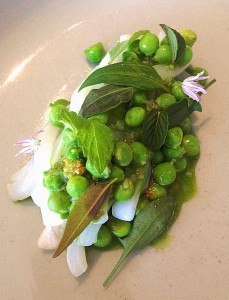 The calamari had been very lightly cooked in olive oil, like a confit, and it was quite resistant to the bite, but not chewy. Greedy Girl liked the freshness of this dish and, despite the presence of the bone marrow, it remained quite light.

Next up were new potatoes and cured eggs with milk, herbs and mustard. 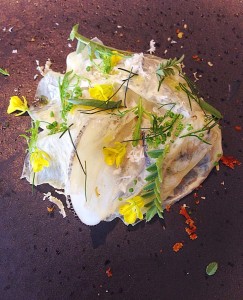 This was an exceptionally tasty dish. All the elements combined well and it was very satisfying. The dark yellow you can see on the plate is actually the cured eggs.

We then moved to warm ricotta and nettle, with roasted chicken and brassicas (another name for cruciferous vergetables). 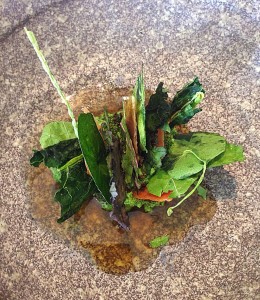 Foraging? Take it or leave it

A chicken broth was poured over the collection of leaves, interspersed with shards of crispy chicken skin. Despite the attraction of foraged food to many chefs, Greedy Girl has rarely warmed to the results, often finding them too bitter. This combination was quite well balanced but neither of us enjoyed the texture of the ricotta on the bottom of the plate. The chicken skin, though, was heavenly.

Next was raw wallaby, wattle and lemon myrtle, radicchio and charred beetroot. 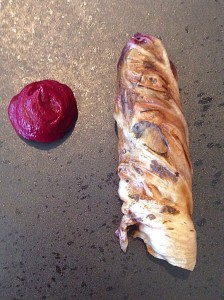 Does it get more Aussie than wallaby and beetroot?

Greedy Girl is definitely no lover of beetroot. She enquired as to whether this could be left off the dish and was met with a firm response in the negative. As other tables around us filled up, she noted that where a dietary issue was raised, the diner was given an entirely different dish from the stated menu. Still wanting to try the wallaby, she decided she could live with the beetroot being on the plate. Most of the dollop you can see in the picture above migrated over to gluttonous husband’s plate. The wallaby was combined with the other ingredients and wrapped in a radicchio leaf. The combination of flavours was very well balanced and the wallaby reasonably soft. It was a little tricky for Greedy Girl to bite through cleanly but she got there. Trying the beetroot, it wasn’t as dominant as on other occasions.

Greedy Girl continued with the champagne, while gluttonous husband opted for a glass of red. The sommelier recommended a 2012 Bests Great Western cabernet sauvignon. This was a very deep, very smooth and rounded red which went well with the wallaby and the next course.

Our final course was beef. 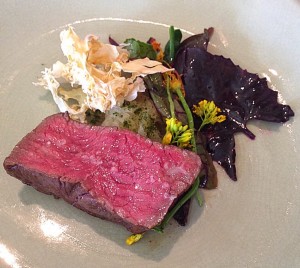 Kobe beef when it’s not, ahem, from Kobe

This glistening pink slab was Tajima beef. If we were in Japan, it would be described as Kobe beef. Like the naming convention surrounding champagne, Kobe beef can only be described as such if it’s from, well, Kobe. This was locally farmed. It was a very firm texture but cut easily and wasn’t at all chewy. It was served with onions soured in whey, cauliflower, grilled leaves and flowers. The accompaniments, for the most part, were delicious, although neither of us warmed to the grilled leaves, many of which were just too bitter for our palates.

It was time for something sweet. Gluttonous husband also had a glass of a local dessert wine, a 2009 Wolsley botrytis semillon from Paraparap, near Geelong. It had a lovely bouquet and wasn’t too sweet or cloying. We’d never encountered a dessert wine from this area before so it was a very pleasant surprise. Wonder if they have a cellar door?

Our first dessert was red fruits, lemon and lovage with wild cabbage and buckwheat. 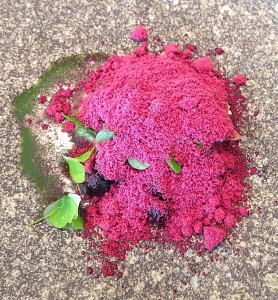 Cabbage in dessert? A first

The colour was certainly intense and the flavours meshed together well. The cabbage just gave it a little bit of an edge. It was very enjoyable.

Next was a dish that is one of the chef’s staples, economically titled ‘parsnip and apple’. It’s been on the dish at Brae since day one and keeps being rolled out, summer and winter. 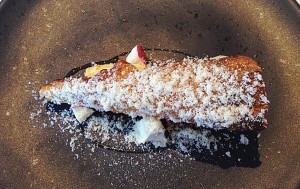 This was like a deconstructed apple pie. It was presented almost in the style of a cannoli but the crispy element is actually parsnip. It’s a triumph of skill and imagination and very, very easy eating.

To finish, we had a delightful espresso alongside some little treats made of rhubarb, pistachio, blood and preserved blackberry. Not quite a cake but soft yet crunchy and tangy A great way to end the menu. 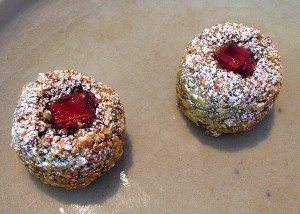 We were lucky enough to be invited into the spacious kitchen at the end of service to have a chat to the chef and he indicated, after a pretty hectic year, he was looking forward to a short break over the holiday season. Some of his team members from Royal Mail came to Birregurra with him but he’s run a smaller, tighter operation in the early stages of Brae. He did say, though, he hoped one of his next steps would be to install a development kitchen to try out even more imaginative and skilful fare. Greedy Girl looks forward to seeing what’s next.