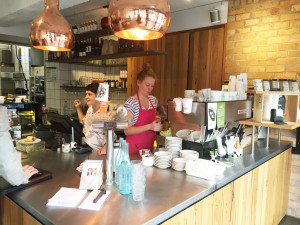 The southern end of Collingwood’s Smith Street has taken a rather longer time to realise its foodie credentials. This block, dominated by the McDonald’s regional office on the corner of Victoria Parade, is now starting to find its feet – and favour.

Major Major is a hot place to go for breakfast/brunch/lunch. Co-owned by Niall Sandison (formerly of Rockpool, Spice Temple and Pope Joan) and Simon Hall, who also manages the Thai-inspired Easy Tiger a few hundred metres down the road, the café has been fashioned out of an industrial space to be light, bright and welcoming.

The building itself was apparently a morgue at some point in its history, perhaps somewhat unsurprising given its proximity to a number of hospitals on Melbourne’s city fringe. Happily, there is no lingering sense of that macabre past. The area is full of offices and, as such, Major Major has struck a real chord with hungry and thirsty local workers – and even Greedy Girl who moseyed out of the city with fellow foodie Ate His Crusts one lunchtime.

While Major Major only operates from early morning to mid afternoon, it caters well to creature comforts. There’s good coffee from Duke’s Coffee Roasters, beer on tap, and Greedy Girl was pleasantly surprised that the mineral water poured immediately on nabbing one of the last tables inside was complimentary.

The menu crosses a fair few styles of food, leaning towards Asian influences, with kimchi as a side to a crab omelette, nam jim dressing with a bacon and scrambled egg dish. Greedy Girl was in the mood for something hearty and took the Kaiser bacon steak with confit potatoes, fried egg and sautéed kale. It was nicely presented and both the egg and bacon perfectly cooked. The egg was runny and the bacon didn’t test positive to a hard rind; in short, delish. The potatoes were very pleasant, but one needed to eat them with the bacon or the kale to get a salty hit. A word though, about the kale – there was an utter profusion of it on the plate. Overkill, Greedy Girl thought or, as Ate His Crusts quipped, ‘Over-kale’. Boom. 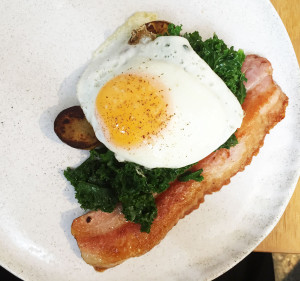 Ate His Crusts chose a lunchtime staple – spaghetti aglio olio with crab meat, chilli, lemon zest on bagna cauda (basically, a garlic, olive oil and anchovy warm sauce). The pasta was cooked perfectly and the plateful disappeared before Greedy Girl had time to enquire as to his satisfaction with the dish. Clearly that was not needed. 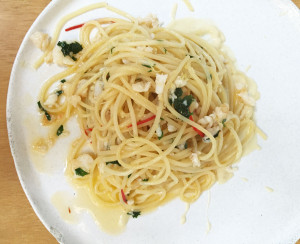 Alongside a very decent piccolo for Greedy Girl and a long macchiato for Ate His Crusts, we took a couple of sweet treats – an escargot and a chocolate croissant. It pays to be quick to get your pick of sweets at Major Major – most had already been sold and the lunching hour was barely half way through. 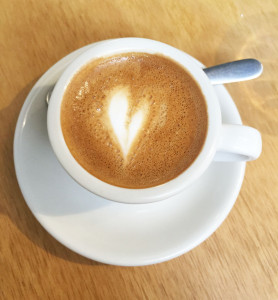 Major Major is a bit of an oasis in this area, although there are already signs other foodie entrepreneurs are opening up in this particular block. There’s a good variety of dishes on offer with some interesting combinations, excellent service and a comfortable feel.