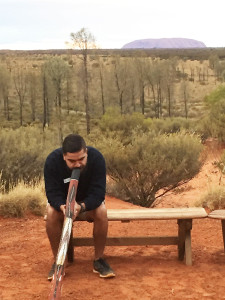 As the sun went down over the rock, our guide played the didgeridoo

In Australia’s incredibly imposing red heart, Uluru (also known as Ayers Rock)  is a magical sight. This massive sandstone monolith is said to be around 700 million years old and Greedy Girl humbly submits it should be on every traveller’s bucket list – it’s just that extraordinary.

But given Greedy Girl doesn’t like to cross the road without the prospect of a decent feed, she also researched the foodie experiences available in the area. She was delighted to discover Tali Wiru.

In the language of the indigenous Anangu people, the traditional custodians of Uluru and the Kata Tjuta national park (in which Uluru and a host of other amazing sights sit),  Tali Wiru is literally ‘dune beautiful’. About an hour before sunset, diners are picked up from their Ayers Rock Resort hotel and ferried in a rather enormous all-terrain vehicle out on the famous red dust roads to the site – roughly a 15 minute drive.

Tali Wiru is not a restaurant per se, it’s actually a tour. Greedy Girl and gluttonous husband are not fond of group tours but the prospect of a fine dining experience under the stars, overlooking the massive rock in the distance was too tempting.

And so we found ourselves in the middle of nowhere, apart from Uluru and the even bigger Olgas (also known as Kata Tjuta, which means ‘many heads’) there’s basically nothing else out here apart from scrub, trees and the occasional salt pan. We were greeted by very welcoming wait staff bearing trays of cool wash cloths which, in that dusty environment, are always a good idea.

We trundled up a short sandy rise to the viewing area where more waiters offered us glasses of Louis Roederer champagne, followed shortly thereafter by the first of the canapés – an emu carpaccio. Could it get any more Australian? And so, the tone was set for the evening. This was typical ‘Australian’ food – overwhelmingly French techniques with a few Asian influences and a smattering of native ingredients in each dish.

All told there were four delicious snacks to start, while our tour guide played the didgeridoo and the sun started to set over Uluru. We also helped ourselves to scallops with lemon myrtle butter, a blue cheese tart with truffled honey and braised pork belly with a pickled cucumber salad. Delicious – if a bit tricky to juggle champagne glass, the little serving spoons and the camera for the enormous range of picture opportunities. 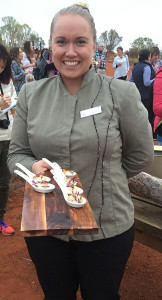 The light was fading and so we were urged to make the final ascent, a short walk up to the top of the dune where four tables for two were set, as well as one long bench. Greedy Girl and gluttonous husband were shown to a table by the lovely Trine, pictured above and a long way from her Estonian home.

The menu at Tali Wiru offers four courses – an amuse bouche and then three choices for starter, main course and dessert. Unless you have some significant dietary restrictions, there’s probably something for everyone here, including fish lovers and vegetarians. Greedy Girl can’t vouch for whether the vegetarian options were vegan friendly. Each dish was matched with Australian wines, but if you had an aversion to a particular style, our lovely waiter Trine said, you could take any of the other available tipples.

Our amuse bouche was cauliflower espuma with sevruga caviar, Joseph olive oil (from McLaren Vale in South Australia, also a noted wine producer) and baby watercress. Essentially, this was a barely warm cauliflower soup; there wasn’t a huge salty hit from the caviar, but it was a very pleasant way to begin. Greedy Girl wishes she’d brought a huge bag to spirit away the lovely individual Le Creuset serving dishes (just kidding). It was matched with a 2013 M3 Shaw and Smith chardonnay from the Adelaide Hills. Quite refreshing. 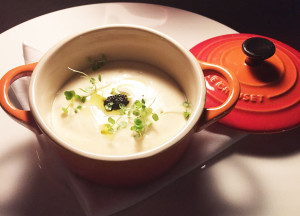 It seems a bit counter-intuitive to order fish when you’re so far away from any coast – probably the closest sea is a 14 hour drive south. Gluttonous husband decided he’d opt for the chilled king prawns with sweetcorn mousse, native thyme dried heirloom tomatoes, chorizo and chive-scented olive oil. Once again, this dish was delightful. The prawns were firm and full of flavour and the accompaniments combined to make a very harmonious dish. This was matched with a 2013 Leeuwin Estate Art Series sauvignon blanc from Margaret River in Western Australia. Greedy Girl is a big fan of the chardonnay from this range but she’s never met a sauvignon blanc to rave about and this was no exception. Gluttonous husband, however, relished it.

Greedy Girl’s starter was premium grade Paroo kangaroo rillettes. Essentially this is a wild game kangaroo that is sourced from four areas in Australia, but originally from the Paroo Darling region in far west New South Wales. This was served with beetroot and Davidson plum (a native sour plum) puree, pistachio nut soil, Persian feta and a wattle-seed brioche wafer. Apologies for the quality of the pictures from here in on but the surrounds were now entirely dark and Greedy Girl was relying on the table lamp for illumination. 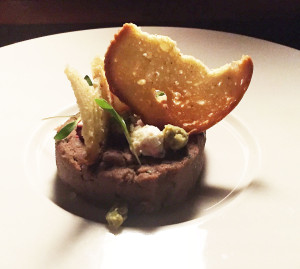 Greedy Girl felt that the kangaroo didn’t have enough fat to be presented in this way so the dish was a little dry. The flavour, however, was divine. The meat worked brilliantly with the fruit and even, Greedy Girl grudgingly admits, the beetroot. She would have welcomed a little extra moisture and some more of the spectacular salty hit from the feta. This was partnered with a 2012 Mooroduc pinot noir from Victoria’s Mornington Peninsula. A stunning match.

It was on to the main courses. Gluttonous husband took the Glacier 51′ toothfish (from Australian Antarctic waters) with wilted Warrigal greens, freekeh, shaved fennel and samphire salad and a caper butter. Gluttonous husband thought the fish was delicious but didn’t want to eat the accompaniments together with it – there was nothing wrong with them, he just felt they were a little too crisp alongside the texture of the fish. The wine this time was from Tasmania – a 2013 Tolpuddle Vineyard chardonnay from Coal River. 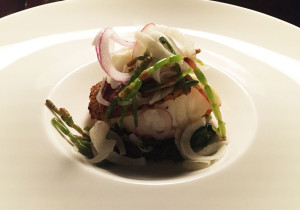 Greedy Girl opted for the steak. This was a Darling Downs wagyu beef fillet with a 6+ marble score. It was served with paperbark smoked onion puree, wild mushroom ragout, a potato ‘pave’ and port jus. It was a substantial fillet, which Greedy Girl ordered medium rare, and cooked brilliantly. Greedy Girl heartily tucked in, working around the outside of the fillet, leaving the more underdone centre for gluttonous husband (he who likes his steak still mooing) to try. All the elements worked really well here, with the possible exception of the potato which was a fraction underdone. The onion puree and ragout in particular were delightful.  The dish was paired with a robust 2012 Tim Smith shiraz from the Barossa Valley in South Australia. It wasn’t Greedy Girl’s favourite wine of the night but she had to admit it worked quite well.

The night was, by this stage, completely dark. We sadly couldn’t see any stars because of the cloud cover. Our delightful guide came back to tell us stories of his culture and the local people. On a clear night he would be able to point out many of the constellations and tell the aboriginal stories behind them but we had to use our imagination this particular evening. He also disabused us of some long-held beliefs about aboriginal words and culture. One word often used to describe aboriginal culture and traditional stories is ‘Dreamtime’ – he said aboriginal people don’t use words that even remotely correspond to this term. Given this is something Greedy Girl was taught in her very early school years it was a bit of a shock to the system!

Once the lamps were turned up again, we finished our meal with dessert. Gluttonous husband chose the steamed quandong pudding with five spice, candied rosella and a calvados anglaise. This was matched with a 2001 De Bortoli Noble One botrytis semillon – one of gluttonous husband’s favourite dessert wines. The pudding itself was a triumph. The quandong is a native fruit found throughout the Australian bush, resembling a peach. The dish was tangy, light and very, very appealing. Delish. 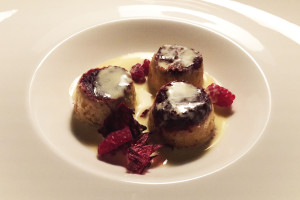 Greedy Girl opted for the Australian cheese platter, served with munthari berries (also known as ’emu apples’ or native cranberries), quince paste and house-baked salt bush lavosh. There were three styles of cheese on the plate – a cheddar, a soft brie and a blue, which tasted very much like a gorgonzola. None of the cheeses was overly strong and it was a very nice way of finishing. This was served with a small glass of Penfolds Fortified Grandfather tawny port. Greedy Girl hadn’t had port in years; while she enjoyed a few sips, it was way too much for her to finish. Gluttonous husband to the rescue. 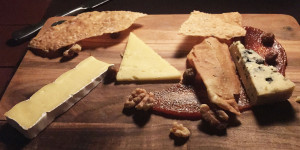 Before we all decamped back down the little slope to our original area (now boasting a rather nice fire in a pit), the two chefs were presented to us and met with a warm round of applause. They worked in near darkness in a small hut, mainly because there hadn’t been enough sun that day to charge the solar panels that provided the kitchen’s lighting. Indeed, the latter stages of the dinner needed to be prepared by torchlight. Regardless of how tricky that must have been, it was a wonderful performance.

And so, we headed for the campfire and a glass of cognac, followed by native wattleseed-infused hot chocolate. Our guide explained how to play the didgeridoo (or yirtakki, to use his preferred word from Arnhem Land) and told us that in traditional lore, women were not permitted to play the instrument – particularly those who were very young or old.

It was then time to wander back down the original path to the all-terrain vehicle and head back to the resort. A couple of tiny nitpicks aside, it was a truly wonderful experience.

If you’re heading for Uluru and tempted by a night at Tali Wiru, you need to know a few things. It’s only held from April to October – the summer months are just too hot and brutal – and even then, it is weather permitting. We received a call at our hotel on the afternoon of our booking saying that, in spite of the looming storm clouds, the dinner would go ahead (whew!). Smart casual is the way to go, but don’t sacrifice comfort for glamour – closed toe shoes (unless you want your feet to be coated in red dust) and a good coat are recommended. During these months it can get pretty cold at night (down to single digit celsius temperatures). A note for girls: forget about heels. You’re walking on a sand dune – don’t risk missing out on a great night with a sprained ankle (or worse).

And finally – you need to book! There are other open-air food experiences (most notably the Sounds of Silence dinner, which is in a similar style but caters to a larger group of people and is in buffet style rather than a sit down dinner) but Tali Wiru limits itself to a maximum of 20 guests.