The Ayers Rock Resort is a collection of accommodation, dining and services on the fringe of the Uluru-Kata Tjuta National Park. The accommodation is offered at various levels, Sails in the Desert being the flagship hotel, right down to a camping ground, but they’re all under the resort’s umbrella. Greedy Girl and gluttonous husband rarely like to eat in the hotel where they’re staying so, during a phone call to organise trips and tours for our lightning visit to Australia’s red centre, the helpful operator suggested we might like to try Arnguli Grill for dinner. Having checked out the various restaurant reviews online there seemed to be a fair smattering of good comments. We booked in.

The grill occupies a pleasant-enough space in the Desert Gardens Hotel. The large dining room is divided down the centre by a functioning fireplace, which was crackling away the evening we made the short stroll down from Sails. Given a very warm welcome, we were shown to a table by the floor-to-ceiling windows and, famished, set about choosing some dishes.

The menu reads well here; like our experience at Tali Wiru we saw plenty of evidence that the chefs here try to incorporate as many local indigenous products and flavours as possible. At Arnguli (a word that, in the local language, means ‘bush plum’), a fair few local grains and seeds are in evidence. Having spied a couple of very intriguing-sounding tasting plates on the menu that came with matching wine flights, we opted to forego a pre-dinner drink and go straight to the action, but first there was a delightful little amuse bouche of a chickpea hummus crostini and some bush ‘dukkah’. The latter is where the local seeds and spices come to the fore. It was intensely moreish and the olive oil served alongside had a lovely peppery hit. 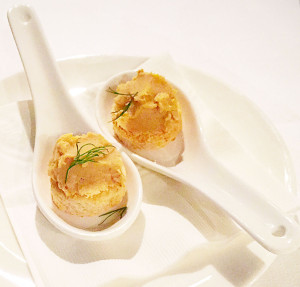 Greedy Girl chose the ‘Tastes of Australia’ plate. It’s easiest to post the picture first and then describe: 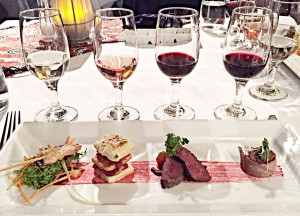 From left, there was a crocodile skewer with mango lime dressing, a smoked wallaby ‘Napoleon’ with tomato marmalade, an emu medallion with braised red cabbage and kangaroo mignon with salsa verde. This is definitely well described as a ‘tasting’ plate because the portions were quite small – tough for Greedy Girl’s practice of eating half and sending the rest over to gluttonous husband. The crocodile was a very mild taste but the texture was, er, quite robust. I suppose given the croc looks like an ‘ornery critter one wouldn’t really expect anything else but tough eating. The wallaby Napoleon was utterly delightful; the pastry was light and flaky and the tomato relish really gave it an extra hit. The emu was quite a strong flavour. Greedy Girl felt the red cabbage overwhelmed the meat and gluttonous husband agreed. Finally, the kangaroo mignon was a soft, delicious morsel. Greedy Girl could have easily eaten a lot more of it. We were batting 50 percent to begin with.

The wines were quite enjoyable, if not outrageously wonderful. We also had to wait a bit too long at the table after the meal was served for the wine flight to arrive. Surprisingly for Greedy Girl, she actually liked the first wine – a Cockfighter’s Ghost Semillon from the Hunter Valley. The last trip to the Hunter proved to be a bit of a let down; having heard so much about Hunter shiraz we thought we’d be in for a treat and were left rather underwhelmed. The other wines were a Yarra Valley rose, a Coonawarra sparkling shiraz and a Heathcote shiraz from Victoria. They generally worked OK with the food. 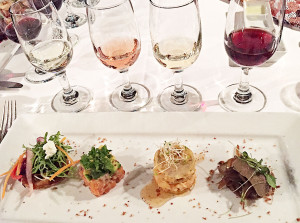 From left, this was a tomato tarte tatin with marinated goats cheese, salmon tartare with mixed greens, prawn crepe with a ‘Kakadu Plum’ glaze and chicken liver pate with onion jam. All the tastes were very enjoyable, especially the chicken liver pate. This option was served with two whites, a rose and a pinot noir. The first was a Thorn-Clarke Sandpiper riesling from Eden Valley. Gluttonous husband relished this, quite enjoying riesling as a style. Greedy Girl gave it a go but it confirmed why she doesn’t often drink whites; it had too much acidity for her. She did, however, warm much more to the Kapuka pinot gris from Marlborough in New Zealand.

It was time for mains which we thought were a bit harder to pick. Gluttonous husband was shaking his head trying to come up with something he liked the look of, until he discovered the list of steaks. He was initially attracted by the Wagyu eye fillet but the wait staff advised a steak with that amount of marbling wasn’t suited to being cooked blue. Instesad he went for the Black Angus eye fillet, pictured at the top of this post, served with a beetroot relish, black truffle butter and a red wine jus. The steak was cooked perfectly and he thought the beetroot relish was particularly good. Not usually a lover of mustard, he even took a spoonful of Dijon on the side and commented all the flavours combined well, even if there was no great flavour impact from the truffle butter.

This was served with the ‘triple cooked’ steak fries with ‘Drovers salt’. This was a very odd side dish. Usually triple cooked anything comes out very crispy. These seemed to be various types of potatoes, none suited to the process because they weren’t at all crispy on the outside and the inside was quite floury. Neither of us enjoyed them. 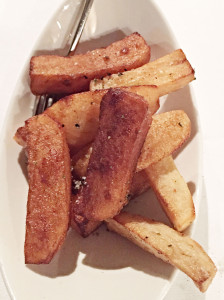 Greedy Girl chose duck tortellini with a mushroom consomme. As has been drilled into her by watching countless episodes of British MasterChef, a consomme needs to be clear. This broth was quite cloudy; the pasta encasing the duck was fairly thick and the duck itself didn’t have any great flavour. But the accompaniments were just downright odd. Lurking beneath the saffron emulsion foam (which didn’t impart any real flavour) were quite thick slices of heirloom tomatoes which were supposed to be roasted – they certainly didn’t have that texture and they were extremely firm to the bite. The plate also included a dressed salad with raw enoki mushrooms which was just really not pleasant. Greedy Girl likes the idea of soup and a salad – just not in the same plate. It just didn’t work on any level. 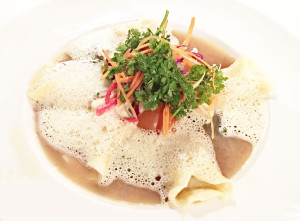 We paid the bill and headed into the coolish night.

Arnguli Grill is nominally the best a la carte restaurant in Yulara, according to various restaurant reviews, and there were aspects of it that were very pleasant – the room, the ambience and the service – even if it was a little slow at times. Some aspects of the food showed great technique but other dishes just tried too hard. Still, in the centre of Australia, it’s quite the oasis.