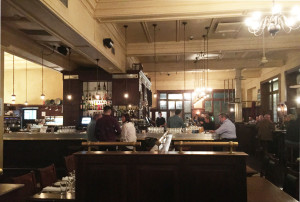 Lots of original fixtures and fittings in the bar and dining room.

There’s no doubt, on a balmy summer evening, the beer garden and Arbor at the Village would be absolutely pumping. On a rather cooler, rainy Melbourne weeknight the drinkers braving the elements are pretty sparse.

The Village has taken over the space formerly occupied by the Belgian Beer Cafe and the tradition of providing fine brews has continued with an exhaustive beer list from all over the world. Greedy Girl and gluttonous husband braved the peak hour commuter crush down the lovely boulevard that is St Kilda Road to meet friends Easily Pleased and The Artist for a hearty mid-week dinner.

At the moment, the area is a rather large development site with apartments soon to spring up around the historic bluestone building housing the Village bistro. It’s prime real estate, opposite one of Melbourne’s noted private schools and a very short tram ride into the city proper. The garden and Arbor are set up for legions of revellers but we hot-footed it inside to the bar and dining room. It’s a very pleasant space, if a bit on the dark side. We found a quiet-ish corner and surveyed the scene, marvelling at the original fixtures and fittings.

But we were there to eat, drink and be merry. Glasses of Jansz Australian sparkling for the girls and a couple of beers to start for the boys. Gluttonous husband started off with a Brooklyn Lager which he pronounced very drinkable. Being cold, we quickly chose our dishes and looked forward to a good feed.

Gluttonous husband and Easily Pleased took starters – a pork belly slider and half a dozen Streaky Bay oysters natural (from South Australia) respectively. The slider was served with an apple relish and fries (although they were rather chunky chips). The pork was soft but the dish was dominated by the vinegary tang of the relish. It was very edible but a shame not to get the full flavour of the pork coming through. Still, it went down a treat. 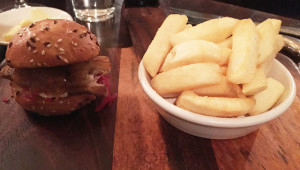 Easily Pleased enjoyed his oysters but raved about the shallot and red wine vinegar dressing. We were all encouraged to dip a chip or piece of bread in and Greedy Girl agrees it was a very fine mix.

By this stage, a bottle of red had been produced – a Tomfoolery ‘Black and Blue’ shiraz from the Barossa. The Artist stayed with the sparkling, given her main course was fish but we three meat eaters relished the robust flavours.

The Artist took a fillet of salmon, which she requested to be cooked through, served with an avocado salsa. The fish showed signs of still being a bit underdone in the middle, but The Artist was very pleased with its flavour and texture and said the avocado salsa was a nice accompaniment. 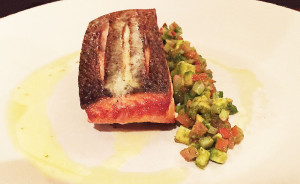 Greedy Girl was hankering for a burger. The Village burger (from the bar food menu) was made of Hopkins River beef (way out in Victoria’s western district), served on a brioche bun with cheese and pickles and a side of crispy chips. The meat was cooked just about perfectly and Greedy Girl is not often a fan of pickles but these were sensational. Offering gluttonous husband a bite, he was transported back to the days he actually used to go to McDonald’s and commented he’d still go there if their Big Mac tasted anywhere near as good as this. It was, simply, delish and the chips served here seemed to have been cooked a bit longer than the other servings at the table which were a bit too blonde for Greedy Girl’s liking. 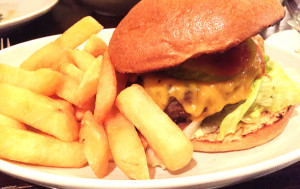 Gluttonous husband and Easily Pleased both had Hopkins River steaks – a 200g eye fillet and a 350g porterhouse respectively, both served with a red wine jus and celeriac remoulade. And here, we were particularly impressed by the level of service. Gluttonous husband, he who orders his steak still mooing, originally plumped for the Wagyu rump. Our friendly waitress came back quickly to let him know the chef didn’t recommend having this cut served blue – it needed a bit more cooking time. Gluttonous husband swapped to the eye fillet (which was a cheaper cut) and pronounced himself very satisfied. The quality of the beef was excellent and both steaks had been expertly seared over charcoal. The sauce and remoulade were also both mopped up. 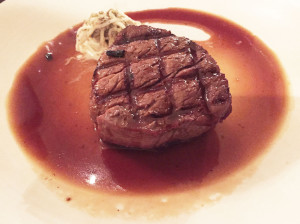 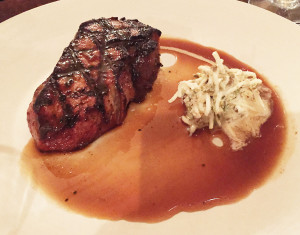 Greedy Girl would have been happy to down the remaining drops of red and head into the night, but we were having a fun time. The room was around two-thirds full and quite buzzy but we could still manage to carry on a conversation. We decided to try each of the three desserts on the menu. Greedy Girl and The Artist both had the dark chocolate and cointreau mousse with passionfruit sauce and a hazelnut praline. The mousse was very good. The dark chocolate tempered the sweetness a tad and the crunch from the praline was welcome. Greedy Girl isn’t a huge fan of passionfruit with chocolate and this didn’t change her opinion, still, it was a very enjoyable dessert. 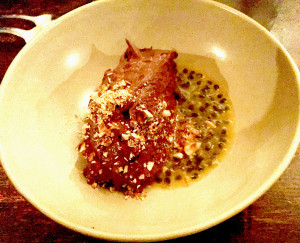 Easily Pleased had a trip down memory lane – apple, rhubarb and shortbread crumble with caramel ice-cream. We all reminisced about growing rhubarb in the backyard when we were kids and the various ways our families prepared it. It was a large serving and it was relished. It was certainly a great dessert for a cold night. 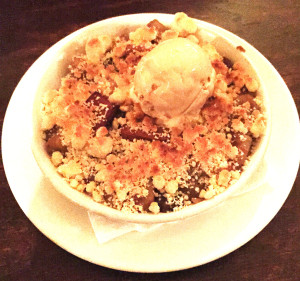 That left gluttonous husband to sample the Turkish delight – a sweet he hated as a kid but has developed an appreciation for in recent years. He ate two pieces at the table and asked to take the rest home. He commented later that the pieces were too cold to be able to impart their full flavour.

And we were done. Pulling heavy coats and gloves on, we headed for the exit and walked past the almost deserted beer garden, with very full and contented bellies.

This is essentially pub food but it has been executed very well. Greedy Girl would be more than happy to trundle down here for more snacks and to work her way through the craft and international beer offerings.