After an amazing time in Moscow, we were hoping to be wowed by St Petersburg. First impressions count for a lot, so arriving in the middle of the city at the evening rush hour possibly wasn’t the best move.

The train from Moscow brings you in just a short walk from Nevsky Prospekt which is the city’s main artery, stretching around 4.5 km. It’s also touristville on steroids. The impact of the magnificence of the architecture, including such amazing buildings as Count Stroganoff’s palace is somewhat blunted by the various chain cafes, fast food outlets and ubiquitous souvenir shops. Any thoughts Greedy Girl had of bringing home a matryoshka doll as a memento quickly went out the window.

But this post isn’t about tourist traps and mass-produced souvenirs. On a visit to the excellent Olo restaurant in Helsinki before we arrived in Russia, our waiter volunteered he’d been in St Petersburg recently. We immediately asked: ‘Where can we get decent coffee?’ His response was not encouraging. 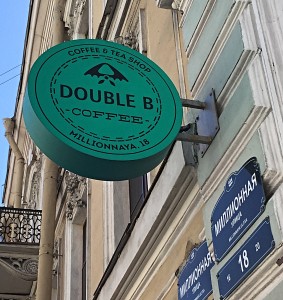 A sight for sore eyes

Greedy Girl was undeterred. Having been to Moscow first and discovering Double B (see the blog Best coffee in Moscow) she was delighted to see it had a branch in St Petersburg. At least we’d have somewhere to go. Desperate to get away from the crush on Nevsky Prospekt, we headed into the side streets and followed canals, past some amazing architecture to Millionnaya Street. One of the advantages in St Petersburg over Moscow is that the street names are also printed in the English alphabet (if you look closely enough). We were able to navigate the 20 minute walk from our hotel quite successfully and viewed some great sights along the way. St Petersburg is often called the Venice of the north because of its canals. Given Greedy Girl is writing this post while actually in Venice she’d probably disagree with that assessment but getting into the side streets and away from the hustle of Nevsky Prospekt was most welcoming.

It was pretty much a carbon copy of what we saw in Moscow, except we had to climb a flight of stairs. What awaited us was perfect, robust espresso and, blissfully, free wi-fi so we could plot our next move – which happened to be the nearby Hermitage museum. Depending on where you go in Russia, the variety of coffees on offer isn’t exactly huge. Some baristas understand the term ‘macchiato’ but most we found didn’t. We plumped for our usual practice of two double espressos with some warmed milk on the side. Perfect. 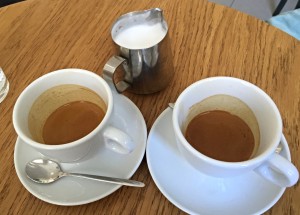 On our way to the amazing Faberge Museum (if you’re a solo traveller or part of a couple, head there around 6pm – it’s only open for group tours during the day, and was quiet and easy to get around in the evening) we passed an intriguing little cafe on the banks of the Fontanka River (an offshoot of the giant Neva River). After our amazing private tour of the Hermitage (splurge – it’s worth it), we headed back to find this quirky little place and enjoy a coffee and chocolate hit. 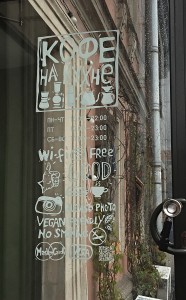 Quirky and cool ‘Coffee in the Kitchen’

The name is only in Russian кофе на кухне which roughly translates to ‘Coffee in the Kitchen’. It’s vegan friendly, has free wi-fi and is just a terrific place to sit. You can also snag a spot in the window and watch the passing parade.
Greedy Girl was all set for another espresso when gluttonous husband spied a hot chocolate being ferried past with marshmallows on top. While he had the coffee, Greedy Girl was too easily persuaded to have a chocolate fix although something did get a bit lost in translation. The hot chocolate came out sans marshmallows but what a cup! It was as though a block of dark chocolate had been melted and mixed with the tiniest amount of milk. It was dark, thick and luscious. Immediate chocaholic high. In Greedy Girl’s defence, she did order the eclair and chocolate chip muffin before gluttonous husband talked her into the drink. OMG. This is seriously good stuff (oh, and the espresso wasn’t half bad either). 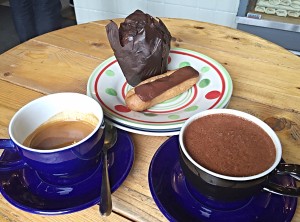 But one of the difficult things for travellers is that most of the cafes frequented for good brews don’t open early in the morning. Coffee in the Kitchen, for example, doesn’t open until 10am. We needed somewhere else for the earlier morning fix before we headed for the train station and back to Helsinki. Our choice was the 24-hour restaurant across the road from our hotel in Marata Street, called Jean Jacques or, phonetically in Russian, джан джак.

We got two reasonable double espressos (see the picture at the top of this post) and while they lacked the roundness of the other outlets, they were quite passable and at least had a bit of strength to the coffee. A smattering of English is spoken.

Like Moscow, there’s a cafe every few metres in St Petersburg; lovers of true espresso and varieties arising therefrom would do well to choose one of the options featured here.