Having gobbled down everything in sight at Osteria Francescana, we moved further south to Rome and another three Michelin starred chef, Heinz Beck at La Pergola.

As a rule, Greedy Girl and gluttonous husband try to minimise their travel costs to maximise the budget spent on food. Often, we’re happy to take the subway in most cities. Rome is possibly the exception to the rule – it’s dirty, extremely crowded and, at this time of year, outrageously hot.

Despite this we researched how to get to the Rome Cavalieri Waldorf Astoria hotel on public transport anyway and quickly came to the conclusion it was a bad idea. A succession of trains, buses and extended periods of walking. Dressed in our finery for a big evening out, we put aside our dislike of taking taxis. Just as well – the hotel is a resort on one of Rome’s hills, Monte Mario, and boasts a panoramic view over the city. Add to that a ‘Blue Moon’ and it was possibly one of the most spectacular vistas ever. Sadly, Greedy Girl’s iPhone photographs just don’t do it justice. Google it.

But we were there for the food – the view is always a bonus. In fine weather, the outdoor terrace is pressed into service and this was a particularly good night. Happily, being up so high, we got the occasional waft of breeze and the sun was setting. All told, it was perfect eating and drinking weather.

While our friendly waiter tried to talk us into the tasting menu, we opted for a la carte – the total volume of food, with amuse bouche, pre and post desserts probably worked out the same but it felt nice to be in the driver’s seat for a change and select what we felt like eating.

The first selection for the evening (apart from a class of prosecco as an aperitivo) was our water. With a flourish, we were given the water menu. Yup. Another first – a menu of all the bottled water options. Italy is huge on the stuff; even though there are fountains of free stuff all over the city, the streets are literally awash this time of year with empty water bottles.

Before arriving at La Pergola, Greedy Girl had read there were 29 options; the waiter said it was probably now around 50. You can choose by region, by style, by level of sodium. The descriptions on the list are akin to wine comments. We opted for a low sodium still water from Bolzano in the Italian Dolomites. Ironically, we were then presented with various types of salt to have with our bread and local olive oil – Italian white rock salt, a green-tinged variety with cumin and black pepper and red volcanic salt from Hawaii. One hand gives, the other …

Rather than do another wine pairing, we sought the sommelier’s advice on a bottle of Italian sparkling. He recommended the Ca del Bosco Franciacorta from the Lombardy region. Very dry but with a slight richness that he said would go well with the food.

Anyway, down to the serious business of picking the food. Greedy Girl initially plumped for a number of dishes, until gluttonous husband’s custom of asking about the chef’s specialties threw up some other options. He was a little miffed about Greedy Girl changing her mind but remembered he usually gets more than just a taste of her plates. All good. First up we were presented with an amuse bouche – the famed baccala, served in crunchy little ‘ice cream’ cones. Baccala or salt cod, is quite a strong fish; we’d eaten it a number of times on our trip (particularly in the north) and not warmed to it but this was exceptional. The creamy consistency was a delight. Yum.

Trying desperately not to wolf down the various breads on offer (and the olive oil went so much better with them than the butter), we awaited our starters. Greedy Girl took the amberjack marinated in yuzu and lemograss, with guacamole and soya macarons. We’d had this fish in Japan before and it seemed like a light way to start. All the elements worked beautifully; the lemongrass was quite mild (often Greedy Girl feels it can overwhelm a dish) and the additional texture given by the crunchy little macarons was excellent. A very well balanced dish and a beautiful-looking plate of food. 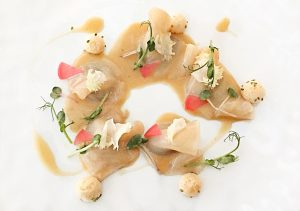 Gluttonous husband took the veal sweetbreads with a roast pepper cream, parsley sauce, capers and olives and what a spectacular dish it was. The sweetbreads had a lovely slightly crunchy crust and perfectly soft inside and the combination of sauces – wow. Greedy Girl is not generally a fan of red pepper but this was just perfect. The harmony of flavours was just superb. 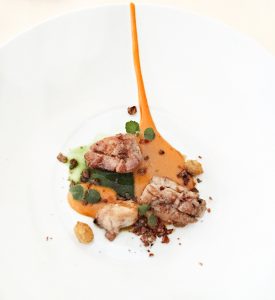 Our ‘primo piatto’ was next. Greedy Girl chose the chef’s signature dish, fagottelli, pictured at the top of this post.

May we just pause for a moment? There were 12 lovely pieces of pasta on this plate and Greedy Girl grudgingly allowed gluttonous husband to have three. The pasta is filled with the chef’s take on carbonara sauce. Don’t cut the pasta open; the centre is liquid and just bursts into your mouth. O. M. G. Soooooooo good. Being carbonara, the waiter spoons over some black pepper flakes at the table. Possibly the most perfect pasta dish ever.

Gluttonous husband needed to content himself with the deep-fried zucchini flower with caviar, served on top of shellfish and saffron consomme. You’ll never see a zucchini flower presented as prettily as this and the substance lived up to the style. Lovely little salty pops from the caviar and a light dish – a great foil for the pasta. 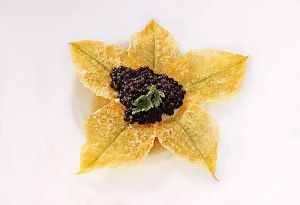 Next were our ‘main courses’. Greedy Girl took the fillet of veal marinated in pepper on aubergine puree with a veal reduction. This dish appeared to be on the tasting menu as well, but diners there only received one piece. Soft and perfect veal worked extremely well with the sauces but the dish tasted quite rich; Greedy Girl was happy to hand the second piece of veal over. 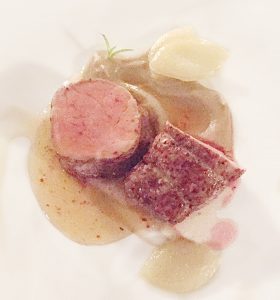 Gluttonous husband went for one of his favourite fish, turbot. For such a strong tasting fish, this was incredibly well balanced, served with ‘caponata’ puree and a Mediterranean crumble. As with all the dishes to date, it was the skilful combination of flavours that made them so enjoyable. 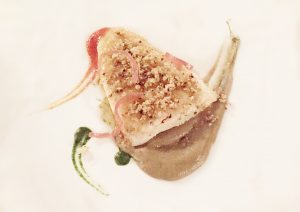 And there endeth our savoury courses; it was time to get our palates adjusted. The pre-dessert arrived – a banana and coconut gelato served with pineapple and lemongrass. Very refreshing. Apologies for the quality of photographs from here on – it was getting very dark. 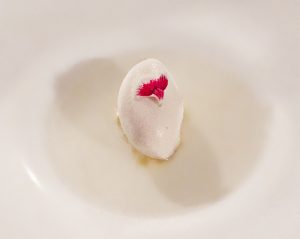 We opted to share the chef’s ‘grand dessert’ – a showcase of seven tastes. We were getting even more worried when a gigantic tiffin box appeared on the table, filled with various petits fours which gluttonous husband couldn’t help but sample. Had he known what was to come he may have firmly closed all the little drawers more tightly. 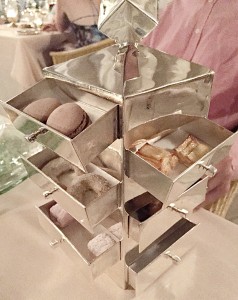 And so, the grand dessert was placed before us. We were thanking our lucky stars we didn’t have one of these each. Sweetness overload. 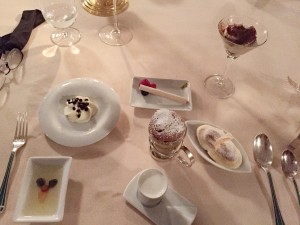 There was a very acceptable coconut cream and white chocolate foam, sambucca jelly, mascarpone with crunchy chocolate balls, a white chocolate cigar with raspberry, a little chocolate/coffee cream dish, a raspberry under the softest, lightest almost bruleed topping and the piece de resistance, a licorice souffle. Clearly these guys are serious about their sweets. A couple at the next table complained there was too much – we were too busy eating.

And we thought we were done. Gluttonous husband was enjoying a Fernet for his digestivo and Greedy Girl was contemplating having to be levered out of the chair. Hah. There was one more offering. Mini ice-cream cones. 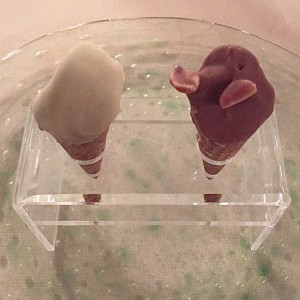 On the left was cherry topped with white chocolate and on the right ws brown butter ice cream topped with peanuts. Not a lover of ice-cream, Greedy Girl nonetheless wolfed down the brown butter version. Weakly she tried the cherry but pronounced herself over and out.

There’s no doubt this is an expensive restaurant but it’s not the most costly meal we’ve ever had. If you’re a lover of fine food, this is one of the greatest experiences Rome has to offer. Treat yourself.