Where to eat Rome: Pepe Verde

Asking a hotel concierge for a recommendation of where to eat can be risky; we’d had huge success with the lovely concierge in Bologna so we figured we’d try the suggestion of the affable gentleman at our quirky Rome hotel. He pointed us literally around the corner, to Pepe Verde in the well-heeled quartiere Trieste.

There are lots of things that stamp you out as a tourist in Rome. Walking around St Peter’s Basilica, hopping off the train at the Colosseum, oh, and fronting up for dinner before 8.30pm. This was a bright and balmy 7pm and we were famished; be warned, some restaurants don’t open before 7.30. Despite there being no-one in the place (well, duh) we pushed the door open. Huzzah! With a nod and a wave of the hand, we were shown to a table and, without a word, given English menus.

The restaurant is two largish rooms. One corner of the main room is occupied by the wood fired pizza oven and that was enough to convince gluttonous husband to try his first Italian pizza. But Greedy Girl is getting ahead of herself. Spying a half bottle of shiraz from Lazio on the menu, she turned her attention to the food.

Pepe Verde (or green pepper) has a little symbol punctuating dishes throughout its menu that indicates where the restaurant feels its creativity is showcased. That was good enough for Greedy Girl. She put her hand up for some cheese and ham balls which featured the symbol and ordered a couple of suppli for good measure. The cheese and ham balls were basically croquettes without the crunchy coating and perfectly edible but definitely had no wow factor. The suppli, essentially tomato risotto balls with mozzarella, were much tastier. As you can see from the picture, below, the chef didn’t waste valuable seconds on presentation. 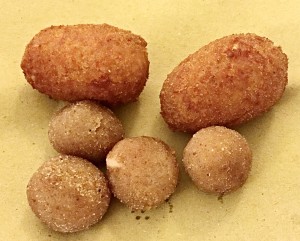 The room had started to fill up but not much Italian was being spoken. We concluded our friendly concierge was doing his utmost to drive the traffic here because we recognised a lot of people the following morning at the hotel breakfast. One table nearby was having a little bit of trouble; they’d already been rejected when asking for spoons to twirl their pasta and then one requested parmesan cheese. She was eating a seafood pasta and the response to that was a flat ‘No’. They seemed a bit taken aback by the vehemence of the reply but, when in Rome …

That was pretty much the nature of the service. Apart from a cheery wave from the pizza chef at his station when we left, we felt like we were a total inconvenience to the staff. Attempts to engage our waitress were met with diffidence. The mantra seemed to be: order, eat, leave.

But we were still a little way off leaving. Gluttonous husband was looking at the range of pizza on offer. Greedy Girl urged him to select the one called Fandango (also with the little symbol), pictured at the top of this post. She was already starting to sing Bohemian Rhapsody …

The menu description – tomato, mozzarella, provola (more cheese), peperoncino and parmesan flakes (yup, even more cheese) – said it was ‘hot’. Greedy Girl had to conclude the heat came from the pizza oven – it certainly didn’t have any real hit from the peperoncino. The crust was thin and a little crispy but all round it wasn’t particularly memorable and rather one-note.

Greedy Girl chose gnocchi with zucchini. This was actually quite delicious. Potato gnocchi was cooked perfectly and mixed with a zucchini-studded pesto and dotted with delectable fresh cheese. It was light, tasty and satisfying. 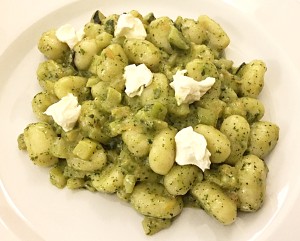 Done. Dessert menus were plonked in front of us, but we were ready to call it a night. We paid up and departed to explore more of the neighbourhood. As mentioned earlier, we got a wave from the pizza chef but there was no other acknowledgment; quite poor form in a country where greetings are important.

Food was decent but service and ambience were pretty poor. For the staff to be so harried so early in the evening service speaks to the culture of the place and their attitude towards tourists. Greedy Girl isn’t interested in becoming every wait person’s best friend, but being shown a little hospitality, as we have in almost every other eatery on this tour, goes a long way.