Massimo Bottura’s book is entitled Never Trust a Skinny Italian Chef. The affable creative brains behind Osteria Francescana, the number two ranked restaurant on the World’s 50 Best Restaurants list, is a slim and fit-looking chap. The book title is testament to his sense of humour – and there’s plenty of that on display throughout this amazing restaurant.

Greedy Girl managed to get her reservation for lunch before this year’s San Pellegrino rankings came out, which saw the Modena fine dining establishment listed second behind Spain’s El Celler de Can Roca. Excited to have won a spot in this tiny restaurant (with only 12 tables) she made sure to follow the reconfirmation protocol to the letter; nothing was going to derail the visit. Well, perhaps Trenitalia. We were staying in Bologna and took the local train to Modena which, of course, was late. We’d given ourselves over an hour to make the 30 minute journey. Time was ticking, the train was unbearably hot and we were sweating – literally.

We needn’t have worried; the train finally got into Modena and we jumped into a taxi for the five minute trip to the restaurant. It’s not necessary to say the address to the driver – the name is quite sufficient. We arrived 15 minutes early; normally the restaurant doesn’t admit anyone until the stated opening time of 12.30 pm but they took pity on us wilting in the 37 degree heat and allowed us to wait inside in the air-conditioning. It gave Greedy Girl time to look at the chef’s artwork collection which sums up his humour and inventive attitude to food.

There are two tasting menus on offer each day – the traditional and the experimental. Unusually for Greedy Girl, she plumped for the traditional. It had slightly fewer courses and she could be certain she would get many of the dishes she’d read about. We opted to take the wine pairing as well. And so began a fantastic afternoon.

There are two aperitivi on offer. Greedy Girl chose the Marie Noelle Ledru Gran Cru champagne (one of the rare glasses of champagne on this trip to date), while gluttonous husband had the Italian Franciacorta from Annamaria Clementi Ca’ del Bosco. Both spectacular drops. Shortly thereafter arrived the first offerings – one of the chef’s favourite dishes, the mortadella sandwich, some rabbit macarons and crispy batons topped with parmesan and local summer black truffles. 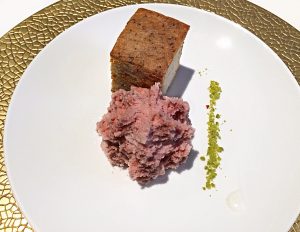 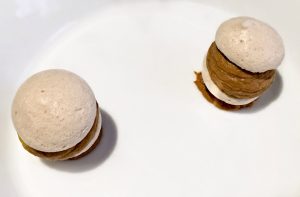 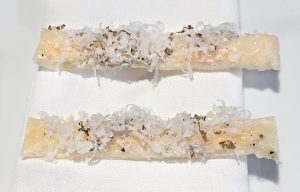 The chef comes to each table during service for a chat with his guests. He said the mortadella sandwich was very important to him as a memento of his childhood where it was his standard school lunch. Perhaps it wasn’t as refined as it is here, with the mortadella pureed and whipped into the lightest mousse. The focaccia breaks apart in the middle cleanly and the paste is spread on top. Delish. The rabbit macaron was a nice texture and quite a strong flavour (so Greedy Girl was glad it was small) and the parmesan and black truffle batons again were very light. A great start. Once these had been cleared, a bread basket and some incredibly long and thin grissini (made with olive oil and very addictive) were placed on the table.

Our first course from the menu proper was a little foie gras croccantino, injected with 40-year-old balsamic vinegar and rolled in toasted almonds and hazelnuts. There was only one thing to do – pop the stick in and take the luscious mixture in one bite. Gluttonous husband, who likes to savour small mouthfuls while dining decided to take a nibble – and the balsamic started dripping down his hand. This time, Greedy Girl’s technique won the day. The dish was paired with a Marco Sara Mufis from Friuli Venezia Giulia. Most of the early plates were accompanied by whites. 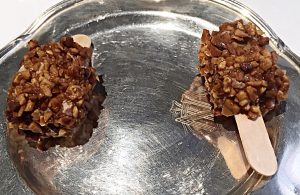 Next was ‘Eel swimming up the Po River’.  This was a strong dish. The eel was presented in a long, thin slab, coated in a syrupy variation of balsamic vinegar known as saba, with flecks of rock salt on the top, which added texture. It was accompanied by green apple gel, polenta and black onion powder. While Greedy Girl isn’t a fan of strong fish, she ate most of this. Gluttonous husband was very happy to get some offcuts. This was served with Damijan ribolla gialla (from the same region as our first wine) – a variety often described as ‘white Nebbiolo’. 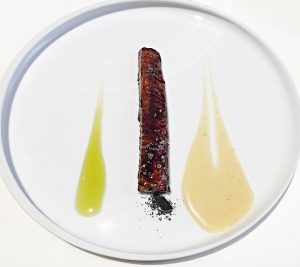 Eel swimming up the Po River

The next dish was caesar salad in Emilia. Again, this was a dish gluttonous husband preferred. The chef’s take on the salad had a number of additions, including a lot of herbs. In fact, the wait staff told us there were are 22 separate elements in this dish. It was enjoyable, subtle and fortunately not heavy. This was served with a lemon, vodka and herb cocktail, which was incredibly refreshing on such a hot day and exceptionally pretty. 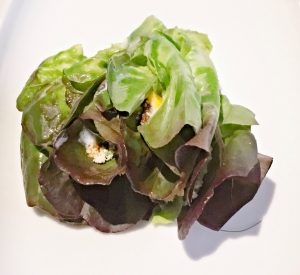 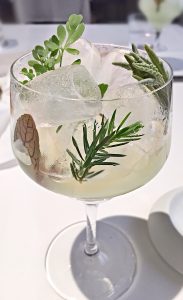 Vodka cocktail with salad? Don’t mind if I do

The next dish was one of the chef’s all-time classics – his five ages of Parmigiano Reggiano. The cheese is presented in different textures and temperatures on the same plate which is a pretty spectacular feat of cooking when you think about it. The dish consists of a souffle made from 24-month-old cheese, foam from cheese aged 30 months, a creamy sauce (36 months), ‘air’ made from the crusts of cheese aged for 40 months (the crisp galette on the top is from the same age) and, finally, grated cheese that is from a 50 month old cheese. OMG. How can one ingredient be so incredibly complex and different? Just extraordinary. A note about eating it: take the galette out and nibble it while crisp, otherwise it can go a little soggy in the other elements. 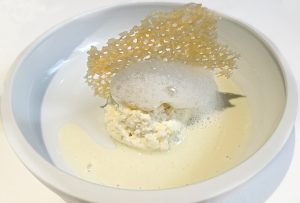 This and the following dish was paired with a wine called ‘Farewell’ by Glocal, again from the north of Italy. Next up was ‘The crunchy part of the lasagne’. The chef firmly believes the crunchy bits on the edges of a tray, fresh from the oven, are those that everyone should fight over. He has recreated them (using the colours of the Italian flag – a nice touch) into what has the texture of a light and crunchy cracker, (the pasta sheets are baked after being boiled) with the other elements of lasagna beneath, layers of the smoothest, richest bechamel you’ll ever have and, of course, the famous ragu of the area. Completely yummy. 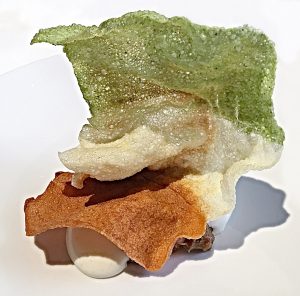 The crunchy part of the lasagne

Our final savoury dish was veal, which looks grilled but is cooked sous vide and coated with charcoal ash (pictured at the top of this post). The menu describes it as ‘spin painted, not flame grilled’. The plate is decorated in homage to the artists that the chef loves, with a range of emulsions in various colours/flavours and a tiny mound of horseradish to accompany it. Soft, tender, tasty. A feast for the eyes as well as the tum.

It was time for our desserts. First up was ‘torta di riso’. This is unlike any rice pudding/cake Greedy Girl has ever tried. It’s made from toasted rice and a rice gelato and was incredibly light. Yum. 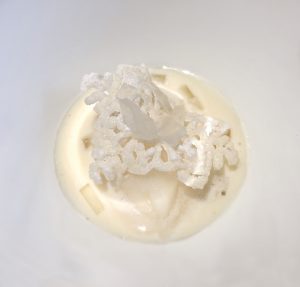 And then, it was the dessert we’d seen prepared on television many times – ‘Oops, I dropped the lemon tart’. This smashed lemon tart made with lemongrass ice-cream and zabaglione is a work of art and an incredibly tasty dish, with a line of little spices on the side. So clever and delicious. 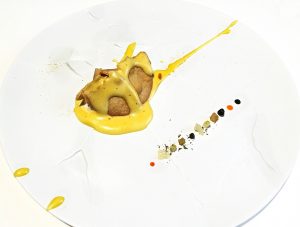 Oops, I dropped the lemon tart

Finally there was vignola – an homage to the local cherries, served with a dark chocolate crumbled biscuit. We were warned the sticks in the top of this dish weren’t to be consumed. Apparently some diners have tried. 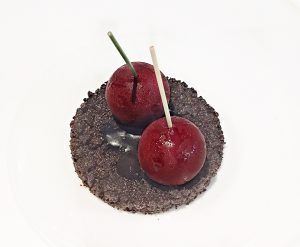 Done! All that was left was to drain the last of the water, have an espresso, and try to fit in the chocolates and little fruit tarts on the little petits fours plate.

We paid the bill and headed out into the heat for the trip back to Bologna. On the way out we were given a brown paper bag – a little gift containing the chef’s recipe for a regional pasta specialty, passatelli, and the breadcrumbs to make it. A nice touch.
All told, the cost came in at around A$900 for the two of us. It’s a splurge, yes, but for this level of food, with excellent service and great paired wines, it was a great investment. We left full and happy, but not bloated. Would Greedy Girl go back and try the extended menu? In a heartbeat. She just hopes she can score another reservation.