After spending three weeks in Italy this year, it’s hard to get the inspiration to head out again for Italian food. While there’s no doubt a great pasta or risotto is perfect comfort food, the quest for more innovative dining experiences means other cuisines come to the fore, particularly when eating out in Melbourne.

It’s well over 60 years since the major wave of Italian emigration to Australia. Melbourne proved to be one of the main destinations and the impact on the city’s food, wine and coffee culture owes a lot to those pioneering souls. Yet, traditions in cuisine are hard to break; there are purists who will tell you in the various languages of the world that ‘this doesn’t go with that’.

Greedy Girl doesn’t take much notice of such dictums; indeed the opposite is often far more appealing.  Some foods lend themselves to experimentation and innovation – it’s how chefs arrived at the concept of fusion after all – while others stick to time-honoured methods and ingredients that result in classic dishes. Italian cooking has that in spades.

During our trip in the northern summer, tradition was on show in almost every ristorante and trattoria the length and breadth of the country. Regional specialties aside, it was hard to find a restaurant that didn’t look/feel/taste like any other (the extraordinary Osteria Francescana and La Pergola being the exceptions). Of course, some venues were better than others but the plan remained the same – antipasto, followed by pasta, followed by a main, followed by dessert, followed by waddling out the door, groaning.

With Italian heritage, Greedy Girl has always been fond of the cuisine but as she’s sought out more exciting food, heading to an Italian restaurant in Melbourne hasn’t been high on her list. There are exceptions – the last experience at Grossi Florentino was excellent – but generally the cooking in a host of other Italian eateries has been, well, nothing to write home about. In fact, a nice spaghetti marinara made in our own kitchen more than satisfies the occasional craving.

So it was unusual for Greedy Girl to have bookings for two Italian restaurants in Melbourne’s city precincts in the space of a week. One, Emilia, is a relative newcomer, taking over laneway premises that had been a long-standing French bistro. The other, Rosa’s Kitchen, has occupied its spot at the north-eastern end of the city for many years. Carb loading coming up? Definitely.

Emilia
Most of the foodie action in Melbourne’s city precinct (or CBD as we Aussies prefer to call in) is at the eastern end. The top of Flinders Lane, Little Collins Street and Little Bourke Street are all havens for food lovers, with a great variety of cuisines and price points. Emilia can be found in Gill’s Alley, a laneway off Little Collins in the middle of the city.

For many years, it was home to Gill’s Diner, a well-regarded French bistro and part of restrarauteur Con Christopolous’ empire throughout Melbourne. Christopolous and partner Chris Kerr still own the restaurant but have brought in chefs Francesco Rota and Luca Flammia from Modena to present their take on Italian gastronomy.

The restaurant floor is attached to a bakery next door and the aroma wafting down the alley is truly inviting; Greedy Girl and the Persian Foodie were shown to a table in a dark spot in a corridor between the bakery and main floor. It’s not a huge restaurant but they certainly make the most of the space; tables are very close together and, even with a few decibels registering on the sound meter it was possible to hear neighbouring conversations. Ordering a prosecco and a glass of Sangiovese, we pondered a small-ish menu. We decided to share; a couple of pastas, then a braised lamb dish, a carpaccio and a salad.

Because the customer is always right, we asked for the meat to come at the same time, rather than have the carpaccio first. Our waiter did give us the distinct impression we were crazy but we didn’t care. First to arrive was some house-baked focaccia. We were about to tuck in when it was revealed it had been made with pork fat – a no-no for the Persian Foodie. Greedy Girl was happy to scoff both pieces. Luckily, the pastas arrived shortly after. We took the ravioli pictured at the top of this post and a gnocchi, to share.

The ravioli was stuffed with buffalo ricotta and served simply with a reduced, tangy tomato sauce and a couple of basil leaves. It was soft, silky and full of flavour. A great dish. The potato gnocchi was served with a rocket pesto, broad beans and bitter greens. The Persian Foodie asked for the pecorino cheese to be served on the side. 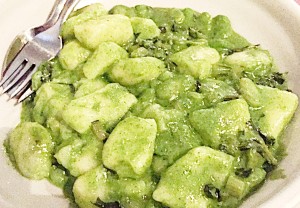 The dish definitely needed the cheese; Greedy Girl piled it on to counteract the strength of the rocket and the bitter leaves. The texture of the gnocchi was good but it’s a dish that occupies a lot of space in the tum.

Next up was lamb – the neck had been slow roasted in wine with capsicum and capers. It came with some firm shavings of a vegetable that didn’t have a huge amount of flavour, as well as some slices of firm asparagus. It was perfectly edible but the textures contrasted a lot and Greedy Girl only took a couple of forkfuls. 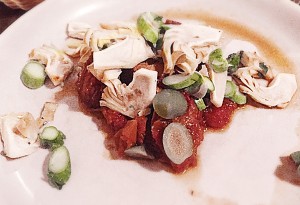 The carpaccio was more her style. It was placed on the table and drizzled with a 25-year-old balsamic vinegar. The waiter, who’d already taken exception to Greedy Girl’s assertion that “northern Italians rule, OK” told us the vinegar was older than him. Clearly we weren’t destined to connect.  The carpaccio was shaved from an eye fillet and served with rocket, a parmesan wafer and the vinegar. Perfectly enjoyable and the wafer gave the dish additional texture. 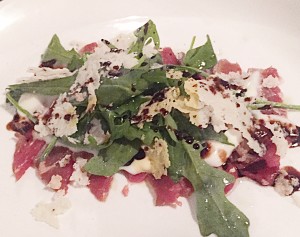 Our requested salad didn’t arrive but we were quite full. It was, however, on the bill so we needed an adjustment before we headed into the night.

This is very good cooking and there are some interesting nuances but Greedy Girl isn’t sure that it lived up to its own claims of ‘challenging perceptions of Italian food’.

Rosa’s Kitchen
Ending the week with a cool and rainy night, Greedy Girl met friends Bev the Cook and her beloved in a very cosy spot. Chef Rosa Mitchell has plied her talents in a number of city locations, before taking over another long-established Italian restaurant in Punch Lane a few years ago. It’s an unpretentious space with chalkboard menu specials, very friendly wait staff and the best Sicilian food this side of the equator.

Rosa emigrated from Sicily with her family probably more years ago than she’d care to remember. She’s been a mainstay in the Melbourne food scene, with a number of very well-regarded ventures. Rosa’s Kitchen is one of two outlets in the city with Rosa’s Canteen down the other end. Ordering a fine bottle of red, we opted for just a couple of plates but the temptation here is very strong to settle in and munch one’s way through the menu. It’s exceedingly comfortable and the food is both familiar and yet exciting. The menu changes a lot here, depending on what’s available seasonally – especially from Rosa’s own farm at Yandoit, about 130km northwest of Melbourne – apparently an area settled by northern and Swiss Italians in the mid 19th century.

Greedy Girl and Bev the cook started off by sharing an antipasto platter while Bev’s beloved had a simple dish of calamari. The antipasto featured elements that are homage to both Rosa’s Sicilian roots and her adopted homeland. A beetroot relish sat alongside cured meats, frittata, olives, wedges of pecorino cheese and a number of tangy pickles and other vegetables. It was a perfect antipasto – not at all heavy and primed the tastebuds for more. 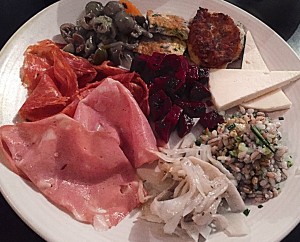 Greedy Girl then made a highly unusual choice for her – tagliatelle with a rabbit, herb and marsala sauce. Generally she abhors eating rabbit; memories of the tough, stewed meat of her childhood come flooding back. Having already eaten more traditional pasta earlier in the week, she decided to make a leap of faith – and it was sensational.

Silky, fresh noodles dressed lightly with the pieces of rabbit as tender as could be and a sauce that had a very slight sweet tang to it. What a triumph. Get it while it’s in season. 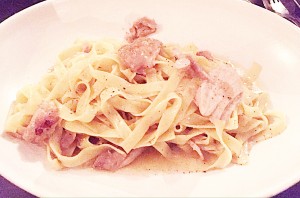 Tagliatelle with rabbit and marsala sauce

With gluttonous husband away on a golf trip, she immediately made a mental note to bring him back here for a date night and to try other dishes. This is exceptionally skillful cooking and provides another level of excitement. It’s certainly easy to point to somewhere like Rosa’s Kitchen and understand where the chef is coming from – that’s not so easy with a number of other Italian eateries both here or in Italy for that matter. When searching for food experiences during our last trip, Greedy Girl couldn’t work out how the various restaurants in any given city were able to differentiate themselves. It’s good to see the desire for more inventiveness here in Melbourne.