Appropriately enough, East is found at the eastern end of Melbourne’s central business district, in a small laneway next to the Sheraton Hotel in Little Collins Street. It’s easy to overlook, particularly if you’re just walking by; their signage is very muted. A sister restaurant to the famed Hu Tong Dumpling Bar, it’s also Chinese cuisine, with a fair smattering of its own dumpling offerings.

The interior is a slightly industrial-looking space with a mix of low seating and high, steel-framed tables softened by the use of traditional-looking tableware and big lanterns. Greedy Girl headed there for a festive lunch with Nuts About Town and scored seats in the window overlooking Little Collins Street. Plenty of light, comfortable spot and high expectations for the cooking, even though on her one foray to Hu Tong (admittedly some years ago), she wasn’t a huge fan.

The food at East is in Shanghai/Szechuan style. The choice is substantial, without being crazy, but for lunch we barely glanced at the larger dishes, preferring a selection of dumplings, buns and wontons. The restaurant prides itself, unusually for many Chinese establishments in Melbourne, on its booze – cocktails in particular. Given it was a workday, we demurred and settled for just a couple of lime and sodas.

With Nuts About Town’s nut allergy, we needed to choose judiciously but we certainly didn’t struggle for a decent variety of dishes. Opting for a reasonably early lunch, we also enjoyed the initial peace and quiet; this is a restaurant floor that can get very loud, as we found by the time we’d finished eating. Some large gatherings were in and the party atmosphere drowned out chances for easy conversation.

Basically, all our choices were from East’s signature dumplings menu – their special truffle xiao long bao (pictured at the top of this post), wontons in a chilli sauce, garlic chives and prawn dumplings, barbecue pork buns and duck meat dumplings. All appeared in record time and we happily snacked from each.

The xiao long bao (there are three varieties on the menu) were an exciting mix. The traditional pork and prawn was topped with crab roe and black truffle. The crab roe gave it an additional complexity of flavour and a lovely salty hit. Delish. Next up, we tackled the wontons. 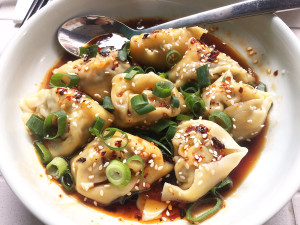 These were slippery little suckers and the chilli sauce packed a bit of bite – a welcome cut through for the richness of the other dishes. Topped with green spring onions and sesame seeds, it was presented very attractively. Nuts About Town, wearing a white top that required dry cleaning, was initially nervous at the sight of the runny broth but managed to survive lunch without even a hint of a speck on her clothing. Well played.

The steamed dumplings were served together. The chive and prawn variety didn’t have an intensely garlicky hit but were quite enjoyable, but the duck dumplings were a delight. Soft, flavourful meat, fragrant, tender and juicy. There were flecks of bean sprouts in there that added to the texture. 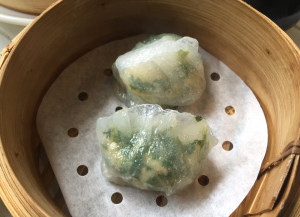 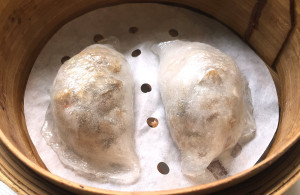 Last up were the barbecue pork buns. Greedy Girl isn’t the biggest fan of these as a rule when heading out for dim sum or yum cha but was happy to have a slight change of pace. These were huge, fluffy and the pork mix inside a bit too sweet for her liking. Note to first timers eating these – make sure you remove the little strip of paper attached to the bottom of the buns. It’s easy to miss it. 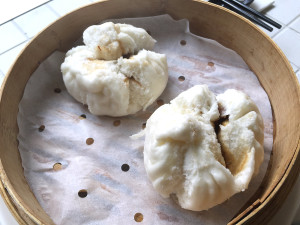 Done! A very reasonably-priced feast and a perfect meal for a work day lunch – given the speed with which it’s delivered. We were glad to depart because the noise emanating from some of the larger tables was verging on ear-splitting.
There’s accomplished cooking on offer here. Greedy Girl would be happy to return to sample more.