It lays claim to being the highest al fresco restaurant in the world. Occupying the 64th floor of the Lebua State Tower on Bangkok’s Silom Road, Sirocco has three separate outdoor spaces – a champagne bar, the Sky Bar (featuring a distinctive blue neon-lit counter) and the restaurant itself.

Greedy Girl and gluttonous husband, enjoying a rare night out in Bangkok before dental appointments put a crimp in our eating plans, had seen Sirocco featured on a TV series World’s Best Restaurants. The plates looked good, the setting extraordinary. It was hailed as an exceptional example of Bangkok fine dining. What the heck. We decided to give it a go.

There’s a maxim about restaurants with a view that the food isn’t great, because it doesn’t have to be. This doesn’t necessarily play out as we learned at the amazing Jaan in Singapore but did hold true in our experience at Le Jules Verne atop the Eiffel Tower in Paris. We were, obviously, hoping for the best here.

Greedy Girl isn’t afraid to invest in fine dining. She’s had some extraordinarily expensive meals around the world and rarely had cause to quibble about the cost. The combination of ingredients, undoubted skills of the chef, great wines, excellent service and a beautiful ambience in the dining room is something to be savoured. Here, though, things didn’t really pan out as hoped.

Firstly, the champagne bar. Invited to sit and have a glass at the highest point of the al fresco area, we chose a Perrier-Jouet and tried to sit back and enjoy the twinkling lights spread over this sprawling city. We were literally in danger of being blown away. At ground level, the wind didn’t appear to be a factor. On high, it was gale force. We couldn’t put down our glass without the distinct possibility it would be blown over. And given the champagne turned out to be, gulp, A$100 a glass we were intent on not wasting a drop. Times like that it’s advisable to keep a currency converter app on your phone. Alcohol is expensive in Thailand but this seemed a bit beyond the pale. Anyhoo, you sip and learn as they say …

We opted to head to our table, which is down a fairly steep and narrow flight of stairs. To the right is the Sky Bar, which seemed full of young drinkers armed with selfie sticks. The rest of the floor is taken up with a split-level dining room. Non-smokers occupy the top level, away from the edge of the building. Initially it seemed a little more sheltered downstairs but gusts continued to push through; an additional irritation were light pillars dotted around the floor featuring blades that caught the wind and made a very loud ‘clacking’ noise. In short, it was not at all comfortable.

But we persevered, ordering two courses each and a bottle of still water, still sipping our champagne. Oddly, the water was not put on ice, but opened and left on the table. At this height and hour of the evening, the weather was not oppressively hot but neither was it cool.

The head chef here, according to the restaurant’s website is Gabriele Castellanza. With experience at the famed Fat Duck, he certainly has some serious fine dining credentials. While the tasting menu actually looked quite decent, we considered it for the barest moment because of the blustery conditions. We opted for starters and mains. A dish featuring three different types of bread (a herb scroll, a soft tomato loaf and a harder sourdough) plus two types of butter (standard salted and chilli-infused) arrived on the table and we heartily tucked in. The herb and tomato varieties were both very good, although the chilli butter didn’t grab either of us.

Greedy Girl chose the foie gras (pictured at the top of this post). Apologies for the quality of the pictures. The lighting is very muted. This was a terrine of foie gras served with rhubarb, mango and Madeira sauce. The foie gras itself was beautiful. It had a lasting richness on the palate but the dish would have been improved with more fruit and perhaps some nice brioche. The only texture came through the pastry cylinder on the top which was so brittle, it disintegrated under the pressure of a knife.

Gluttonous husband took an unusual plate for him – baby cuttlefish. 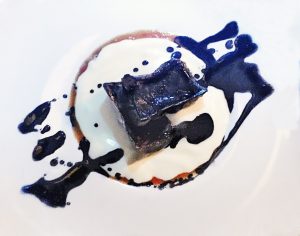 This was Sardinian cuttlefish poached in ink, served with an excellent potato espuma, turnip greens and a cherry tomato. Gluttonous husband was well pleased with the dish but said afterwards he’d wished there were more tomatoes, because the burst of acidity was a welcome counterpoint to the dish. The tomato bread was used here to great effect to mop up the remnants of the sauce.

Next up, he took the roasted turbot. 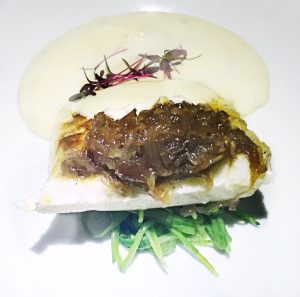 This was served with finely sliced mange tout, caramelised red onion and a Marsala sabayon. It sounded like an interesting combination but it just didn’t pay off. The fish was slightly dry and the moisture from the sauce and the onions didn’t compensate enough. The sabayon was just a bit too strange. One of Greedy Girl’s favourite treats when having Italian is Zabaglione – essentially made from the same base as this sauce. The best thing about the dish was the depth of flavour from the onions. Gluttonous husband left most of the sauce behind. 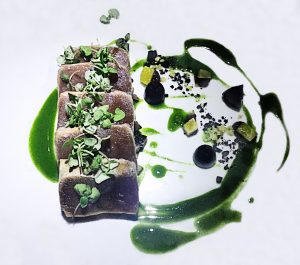 The wait staff asked Greedy Girl how she’d like it cooked. Her response was very, very rare. And that’s what arrived on the plate. The tuna had been quickly seared and the middle was a beautiful ruby red. Sadly the dining area is so dark that the colours don’t shine through. She’d also love to tell you the flavour of the tuna was excellent, but it was totally overwhelmed by the other elements of the dish. Sitting on a bed of ratatouille, it was also accompanied by a tapenade and a basil, lemon relish. The olives in particular were very strong. It was a passable plate of food but nothing to rave about.

We took a dish of Parmesan fries as a side. These were not successful. The cheese tasted gritty and its flavour didn’t meld at all with the potato. We left most of them behind.

By this stage, Greedy Girl was totally fed up with the wind. She needed to twist her hair into a ponytail and try to stuff it into the neck of her dress, just to avoid getting a mouthful of hair before a forkful of food could find its way in. After struggling in vain throughout the first and most of the second course, a waitress kindly brought her an elastic band.

But we were done. We looked at the dessert menu but opted to head down to the less windy footpaths and back to our hotel.

This is definitely a restaurant designed to impress visitors. Greedy Girl imagines it’s seen more than its fair share of marriage proposals. But on a windy evening it’s not a pleasant place to sit and the constant flashes from cameras and phones going off are very irritating – especially as the restaurant booking states flash photography is not permitted. The staff, however, were very warm and efficient.

A note about arriving here – if you are on foot, the entrance from Silom Road is a bit off-putting. It sort of looks like the shopping arcade leading into a train station – one that’s definitely seen better days. Half the shops are empty and it’s far from salubrious. We thought we were in the wrong place, but pressed through to the back of the hallway to find a small sign leading to a lift lobby.

In terms of a food experience? The starters were enjoyable but the mains we chose were forgettable. There’s a lot of exciting food action in Bangkok. If the view that matters to you is the one on your plate, you’d find a lot of other Bangkok fine dining options more to your taste.

Tagged under: Bangkok, fine dining, restaurants with a view, Thailand