Virgin America has recently been taken over by Alaska Airlines so it remains to be seen if that will affect the signature ‘attitude’ of the Virgin brand. That’s evident from the moment you book on the website. Type in your name and a message pops up ‘nice name’. One suspects any name attached to a paying customer would result in that kind of response.

But it goes further, to the airport itself. Having already checked in online and prepaid for two suitcases, the bag drop at SFO’s terminal 2 is a breeze. It’s then a reasonably speedy line through the TSA checks and on to the gate – something one never takes for granted in the US.

Terminal 2 looks brand-spanking new; Virgin America shares it with American Airlines. While we can’t vouch for the experience at the AA counters or gates, the Virgin side of things is bright, airy, clean and reasonably calm – even when an announcement comes over the public address system saying ‘an alarm has been activated, please stand by’. Most passengers barely looked up from their comfy club chairs, or one of the ample work stations, all provided with power connection. The only downside in the terminal is the queue for the women’s restroom.

The flight was full – indeed, a sign at the gate lounge offered a US$300 sweetener for anyone prepared to give up their seat and take a flight leaving two hours later.

Boarding was on time and fairly painless with everyone following directions and moving promptly. We are in group B, aka ‘the rest’ but even though the flight was full, the overhead bins above our economy class seat (known in the airline’s parlance as the ‘main cabin’) were empty. Not enough flyers with status or those who have paid an extra US$20 a pop for priority boarding in our section of the plane. 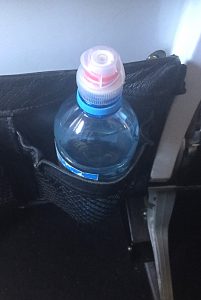 The plane was a standard 3-3 configuration with just one central aisle. Our seats were middle and aisle with a 32-inch pitch and the seat pocket included two nifty little spots for water bottles. The passenger in the window seat arrived after us and asked if we’d ‘mind moving across’. Actually, yes we would. We jumped up and gave him access to his allotted seat.

Pushing back on time, we heard what can only be described as ‘dogs barking’ (and heard again after landing at JFK). This apparently is a quirk of the plane’s hydraulic system. Having flown Airbus aircraft (of several types) often, it was the first time I’ve heard the noise and, frankly, it was rather disconcerting.

The flight across country was fairly smooth, with bumps as we merged into a tailwind somewhere in the middle. Virgin America is a low-cost carrier, so there is no free food, but a variety of free drinks are on offer, including mini bottles of water which are available in a special compartment in the rear galley that passengers can access at will. 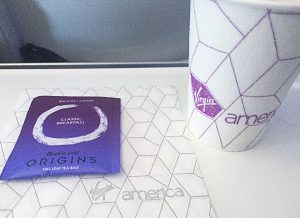 Some drinks are on the house

Not everyone was happy though. A passenger in the row ahead of us held up de-planing because he wanted the details of the female flight attendant in the economy section so that he could file a complaint against her. His grievance was unclear but it seemed to centre around how long it took her to respond to the orders he’d placed through the in-seat system. Given the two attendants working ‘coach’ basically didn’t stop moving the whole five hours of the flight, it seemed a bit petty.

A note about the in-seat options. You could order food, watch a range of free programs and also access live satellite TV from around eight station choices. Other budget carriers would do well to take note. There is also wi-fi on board. This is ridiculously expensive but one gent a few rows up was keeping up to date with his online betting. It looked like the third at Belmont … He must have been winning to afford the air time. 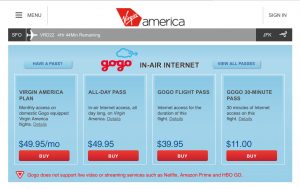 Paying this much for wi-fi in the air? No thanks

The flight landed smoothly at a very windy JFK around 20 minutes ahead of schedule and baggage claim was reasonably fast, getting our suitcases within 30 minutes of landing.

Verdict
It was a good experience; if we were to travel with them again (under the same conditions) we’d probably make more of an effort to self-cater with some food. It does remain to be seen what impact the takeover by Alaska will bring.