Breakfast in Honolulu – the good, the bad and the eggy

When you’re travelling, breakfast can be a problematic meal. Apart from the Asian delights Greedy Girl and gluttonous husband have enjoyed in Singapore (nasi goreng, anyone?), the fare is pretty standard – eggs, eggs, eggs, toast and more eggs.

Honolulu is an interesting city for food. Greedy Girl feels she may be damning this tropical paradise with faint praise. Not having an option for breakfast in the hotel, she sought out some local establishments around the famed Waikiki beach strip – one was familiar, the others not and the experiences were a world apart.

Travelling from Melbourne to Honolulu has become much easier and more affordable, thanks to Jetstar. The flight is direct (no wasting time in Sydney waiting for a connection) and proved to be reasonably comfortable. The only downside was arriving in Honolulu around 6am. When we’d negotiated immigration, collected our bags and managed to get to our hotel in Waikiki, we decided to try to stave off falling asleep on the spot by heading to the new cafe that had opened next to the hotel – Heavenly.

Scoring a table outside, we promptly ordered. There’s not a huge selection of dishes, so Greedy Girl opted for the eggs benedict served with local Shinsato pork belly. It came with a profusion of kale and slices of purple potato. It was OK. The hollandaise was a bit thin and one of the poached eggs had cooked through, instead of having the preferred runny yolk. The potato was unremarkable – and cold. 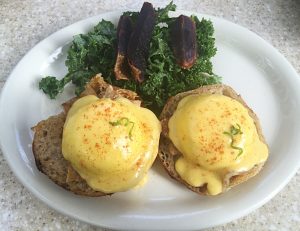 “Heavenly” eggs benedict? Not quite.

Gluttonous husband took the local fruit plate with granola and yoghurt. He mixed it together himself and proceeded to try to stick a spoon into the bowl, which was close to overflowing. He pronounced it perfectly edible. 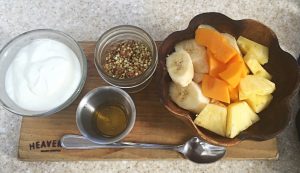 We departed for the coffee cart outside the Princess Kaiulani hotel on the main street and had an OK double espresso each – enough caffeine to give our jetlagged brains a little kick. It was obviously not enough to change our woebegone expressions because when we got back to the hotel, the front desk took pity on us and found a recently-vacated room – even though check-in was still six hours away. Bliss.

On morning two we trundled down the Beach Walk in Waikiki and headed for Bills. Greedy Girl wants desperately to add an apostrophe here but begrudgingly will use what’s on the sign. This is part of the international empire founded by Australian cook Bill Granger. We’ve cooked many of his recipes and have eaten his classics in Sydney many times. We also sought out one of his venues in Tokyo (see the blog ‘Coffee in Tokyo‘).

As this post was written, the street level dining room at Bills was closed for renovation. We were directed up a flight of stairs to a light and airy environment with a distinctly tropical feel – plantation shutters, ceiling fans. Opting to go straight to food, Greedy Girl ordered the signature ricotta hotcakes (pictured at the top of this post), while gluttonous husband took the corn fritters.

And both dishes went down a treat. Gluttonous husband’s corn fritters were accompanied by roasted tomato, crispy bacon and a rich and delicious guacamole. He attacked it with relish although he commented afterwards that he thought he could taste rawness in the flour – perhaps the corn fritters weren’t cooked all the way through, although they certainly looked ‘well done’ on the outside. Still, it was a relatively minor quibble. 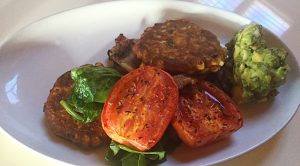 Greedy Girl’s hotcakes (or pancakes, if you prefer) were piled high on the plate. Served with a honeycomb butter and slices of banana, it made for a pretty sight. A small jug of maple syrup was on the side.

Now, normally, Greedy Girl wouldn’t countenance using maple syrup, not enjoying sweet things to start her day but the dish needed an extra moisture element. Gingerly she poured a little on the plate. Then she poured a little more. Gluttonous husband was gobsmacked. He wondered if it was jetlag or a trick of the eye … When Greedy Girl commented she’d started to ‘warm’ to maple syrup, he grinned: ‘Welcome to the dark side,’ he said. Yeah, OK. Whatever …
We polished off both plates and decided then we needed a coffee to try to spark us into action; both of us were feeling reasonably fit given we’d downed half a dozen cocktails each at happy hour the previous evening. Two double espressos appeared with a small jug of steamed milk on the side. 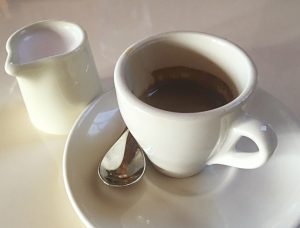 And it was very decent coffee – rich, robust, round, strong. As it should be for US$4.50 a (tiny) cup. Meh. Drinking good coffee anywhere is hardly cheap anymore. When we tried the coffee at Bills in Tokyo, Greedy Girl’s caffe latte equated to around A$8 – and the Australian dollar was on a high then.

On our final morning, before heading to the airport and a flight on to San Francisco, we tried Goofy, upstairs in a local ‘shack’ not far from the Hilton Hawaiian Village. This was a recommendation from a foodie friend based in Chicago – we’d tried his other recommendation of Home Bar and Grill the night before and it was sensational, so we had solid expectations.

Viewing the menu, we quickly concluded this was another outpost run by the Heavenly people. The dishes listed were virtually identical. Oh well, in for a penny … We put our name down on the table list outside the front door and were told the wait for a table ‘wouldn’t be long’. Right. Nearly 25 minutes later, we were shown in – and the dining room was virtually empty. Greedy Girl wasn’t impressed. Yes, a number of patrons had left, but the staff didn’t replace tables as they emptied – they waited until it was, presumably, more convenient for them to show a host of people to tables at the same time. Grrrr.

Anyhow, Greedy Girl had been recommended to try the eggs benedict with pulled pork, which she duly ordered. Gluttonous husband took his fruit bowl again, but this time the yoghurt and granola to add to it were priced separately. A tiny pot of yoghurt was priced at US$3 – hardly value for money. Still, he tucked in and said the papaya was enjoyable. 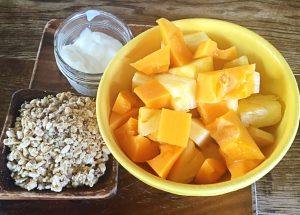 Expensive little pot of yoghurt, that …

Greedy Girl decided to taste the hollandaise on her plate, which again looked very thin and found it to be rather sweet. Yikes! While she concedes that a lot of food commonly available in the US leans to the sweeter side of the spectrum, this was a shock to the system. However, she pressed on and tried all the elements together – it kind of worked. Kind of. The egg yolks were runny (a bonus) and the pulled pork was very good. It just didn’t satisfy as a dish – for possibly the first time in recorded history, Greedy Girl couldn’t finish the eggs. The kale went untouched and a profusion of soft, almost gelatinous purple potatoes was dire. It just wasn’t pleasant to eat. 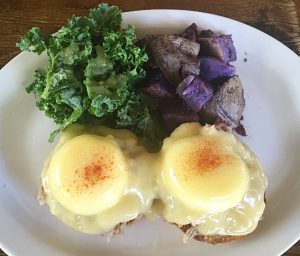 On that basis, we weren’t inclined to try anything else there. Off we went, heading for Gorilla cafe on the main drag, Kalakaua Avenue, for a very good double espresso, although the barista found our request to have the coffee in ‘real cups’ to be a bit tricky. He wanted to put one double espresso in the china cup but provide the second in a paper cup. Hmmm. We had no idea why.

There are some good meals to be had in Honolulu, particularly in the sports bars, but the attempt to do something new and upmarket at Heavenly and Goofy didn’t really stack up. The quest for a decent breakfast on the road in Waikiki continues.