Not a million years ago, the Lower East Side wasn’t hugely on the radar for visitors to New York City. Before the city cleaned up its act, parts of LES had an infamous reputation – for slums. But with the advent of a new century, the area has changed dramatically to be a top destination for food, wine and coffee.

Greedy Girl and gluttonous husband love their coffee strong, round and smooth. Gluttonous husband is a purist, taking mainly espressos, while Greedy Girl enjoys the softening of a bit of milk. Here in NYC, she was introduced to the ‘cortado’ or what Australians would recognise as a ‘piccolo’ latte – espresso served in a small glass, topped with steamed milk. The language of coffee and the skill of various baristas reflects the make up of this vibrant area – it’s very, very diverse.

Of course, being the US, there’s a range of coffees tailored to the local tastes, such as syrup-laced lattes and iced coffees. This blog, like all our posts on coffee, focuses on the classics. 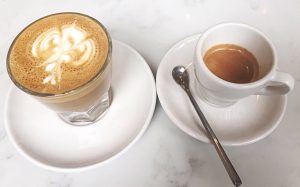 Greedy Girl’s first few sips of the cortado tasted a little bitter but it mellowed out to have more of a nutty flavour. Gluttonous husband’s double espresso was on the mild side – it didn’t have that slap-in-the-face, kick-of-a-mule blast he enjoys. Still, it was a comfortable spot to sit, if a bit of a hipster haven – as evidenced by the ‘Ludlow Barber Supply’ at the rear of the cafe – lots of beards getting tended with loving care back there. Free wi-fi and, if you’re in need of a snack, a small menu. This was our ‘local’ for our two-week stay in the city and generally the consistency was very good, although some baristas were better than others. 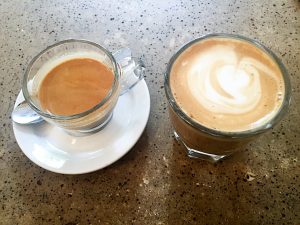 A very small cafe on Stanton Street, seating inside is limited to some stools overlooking the window and some high tables, also with stools either side. Given it’s such a small space, there’s no wi-fi – presumably the owners don’t want people sitting hunched over their laptops/tablets nursing a mocha latte for two hours. We ordered the usual for NYC – a cortado and a double espresso. We did see, however, what they termed a macchiato going out – double espresso in a small glass filled with milk, whereas the cortado glass was a bit bigger. We had a bird’s eye view of the barista. Not much love for the work there – the glass wasn’t positioned under both nozzles and a fair amount of the precious coffee was lost down the drain, before she moved it. Frothing the milk was also rather brief and got a bit messy. That didn’t seem to faze her in the slightest. The cortado tasted a bit insipid and the double espresso watery. There are some take away salads in a refrigerated case and other food available in store. 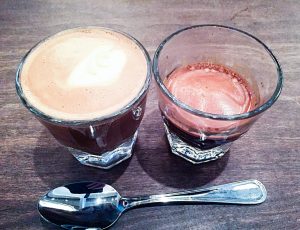 Looked the goods, but a bit watery

This is a huge cafe on Orchard Street, full of singles staring at their laptops, taking advantage of the free wi-fi. Most of them are wearing headphones too, so they’re missing out on the tunes which are quite pleasant. From an Australian coffee lover’s perspective, it’s perhaps not the greatest choice. A conversation with the barista was a bit strange. Having seen the different-sized macchiato at El Rey we enquired as to whether it would be better to order that for someone who likes a strong, robust flavour. She said the cortado/macchiato was identical – the only difference being the type of milk used, saying a cortado was made with skim milk. Hmmm. We pressed ahead. The cortado wasn’t great. Skim milk, in Greedy Girl’s humble opinion makes a coffee watery and that’s exactly what happened here. The double espresso was also somewhat disappointing. It did have some flavour when washed around the mouth but still quite watery. When we visited there was a solid array of cakes and cookies but wouldn’t be our preference for coffee. 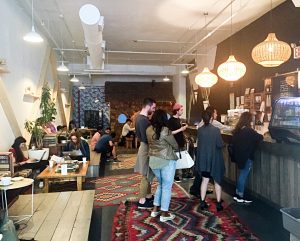 Could hear a pin drop 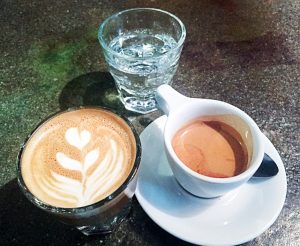 Coffee prepared with a lot of care

This was a very unusual cafe, long and relatively thin, with a timber podium on the left and a long bar on the right. While there are some large communal tables down the back and the obligatory bar stools, most of the seating here is on the podium – a mix of Thai-style floor cushions and single armchairs, all with access to power. As such it’s jam packed with millennials/Gen Ys all click-clacking away on their laptops. For such a large place, only one person is working and the barista is slaving over a very small espresso machine while trying to take orders and manage the ever-growing queue. The coffee is good – not outrageously robust but very smooth. Gluttonous husband was impressed – he received a small glass of sparkling water with his espresso – the first for NYC on this trip. The cafe also has a range of beers and a small menu, including some of the biggest donuts Greedy Girl has ever seen. Her teeth are still aching at the thought. There’s free wi-fi (well duh, just look at how many laptops are in evidence) but also free printing! 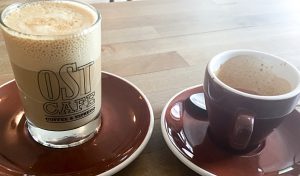 A bit too far afield

This was the furthest afield we ventured, almost all the way to the East River (which, incidentally is the wi-fi password here). This was a fun, dog friendly cafe in an old building. Indeed, in the restrooms, there’s a sign that tells patrons that the plumbing is still from the 19th century so not to, er, flush what shouldn’t be flushed. There’s a display case at the counter with some good-looking pastries but, of course, we just ordered our usual coffees. They were OK. Nowhere near the best on the LES. The espresso was smooth enough but the cortado was on the weak side. Apparently they serve Intelligentsia coffee – which we’d first discovered in Chicago (see the blog Coffee in the US here) but it wasn’t a patch on the experience we’d had there. 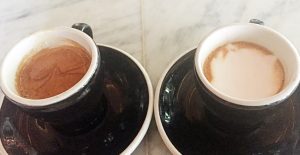 We actually stumbled across this looking for Irvin Farm (see below) which had nowhere to sit. Seeing a crowd congregated here, we decided to give it a go, finding out it was actually an Australian cafe, owned by three guys from Sydney (so our friendly barista told us). How did we know? A girl next to us ordered a ‘flat white’ – ’nuff said. We took an espresso (double shot) and a macchiato. It was strong, edgy and had a very distinctive flavour. All good. Gluttonous husband actually commented he preferred the macchiato here to his standard espresso. On the side, we opted for a piece of toasted pistachio bread (the banana bread having already sold out). It was delish but on the expensive side at US$3.50 a small slice.

We’d already tried to get in here once but the place was packed with people on laptops (obviously free wi-fi). It looked like we were going to be two-time losers on a subsequent visit, with long wooden benches out front (the cafe is on a corner) were again full of people soaking up the sun and warmth. We did, however, poke our noses inside and discovered a small table in a corner. Huzzah! We took our usual espresso and cortado (pictured at the top of this post). The espresso was served with a glass of sparkling water and was full of flavour. It wasn’t particularly strong but was very rounded in the mouth. The cortado was perfectly drinkable and it seems, for the most part, this area of NYC does this style of coffee extremely well.

88 Orchard Street (with other locations throughout the city)
irvingfarm.com 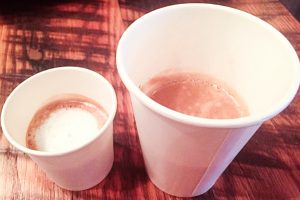 This was a trek down Rivington Street to a cafe that looked to have possibilities – quirkily furnished in a basement space. The coffee menu didn’t offer a cortado so we opted for a double espresso and a macchiato. One of Greedy Girl’s pet hates when ‘drinking in’ is getting the coffee ‘presented’ in a paper cup. Tick. Another pet hate is bad coffee. Tick. Greedy Girl should have paid more attention to some of the Foursquare reviews, one in particular which said: ‘Catastrophic espresso’. For the first time, the espresso came in a bigger ‘cup’ than the macchiato. Neither of these were enjoyable. Gluttonous husband summed his experience up succinctly: ‘I’ve had better coffee on an airplane’. Presumably their other coffee drinks are more attuned to local tastes but lovers of Italian style won’t find much to their liking here.