Most of Greedy Girl’s Sydney trips are like a connected series of sprints – flight, meeting, office, meeting, office, flight. On the odd occasion there’s time for a quick lunch and this trip she managed to spend time with a dear friend for a much-needed catch-up.

Sydney’s central business district has changed a lot in terms of its food and bar scene in recent years. While Melbourne is clawing back ground when it comes to fine dining, Sydney has used the change in licensing laws to revitalise its ‘middle ground’ with a slew of cafes and bars. Eating out in Sydney generally isn’t terribly inexpensive, with even food court prices seemingly high, but it’s worth paying for a spot to sit and have a decent coffee and some interesting dishes, executed and presented well.

We stepped into Hills Bros – tucked in beside the wall of an office building lobby just off Martin Place. There are a few high tables and a row of seats in front of a low bench. These were occupied by people looking intently into their laptops (perhaps there was free wifi, Greedy Girl didn’t ask) but the space appeared to clear out just as the lunch rush began.

The menu is fairly succinct but includes such favourites as avocado toast, an array of sandwiches, waffles and even congee – this is Sydney after all, where a lunchtime feed of Asian food is customary.

Greedy Girl’s dear friend The Blonde Chick opted for the avocado toast. The hipster revolution may cause some people to dismiss this dish as a fad but there’s no denying it’s a very appealing plate of food. The cafe offers two versions, one with smoked salmon and this one, which features olives and tomato salsa and za’atar – a Middle Eastern herb mix. It was light, refreshing and a very good lunch option. 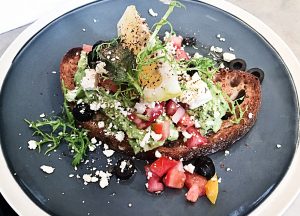 Greedy Girl was looking for something with a touch of sweetness. She contemplated a banana, peanut and espresso bread with salted caramel butter, but opted instead for the oatmeal breakfast waffle (pictured at the top of this post). This was seriously yummy. Served with a quince curd, brûléed banana and berries it was a very enjoyable concoction. One note – there was a warm orange spiced almond milk on the side. When Greedy Girl gingerly poured it on the plate, it seemed split and watery. She avoided it.

There was nothing more to be had except a very good piccolo caffe latte and we were done. 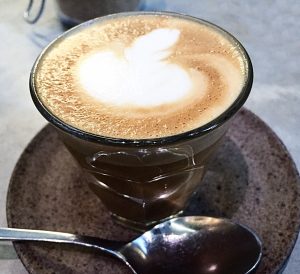 Hills Bros is by the same team that operates Reuben Hills and Paramount Coffee Project in inner-city Surry Hills. It’s the sort of place you’d walk by unless you were looking for it. Seek it out if you’re looking for a tasty, quick Sydney lunch. 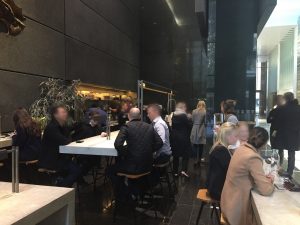