Martha’s Vineyard is a refined, exclusive little island. In the summer months, its population swells from holiday makers all over the world, but especially the north-east of the US, where it’s a relatively easy to get to destination.

Greedy Girl and gluttonous husband paid a visit out of the main season – and just as well. Navigating the narrow lanes and unique roads that seemed to take one around in a circle (when that wasn’t the desired outcome) was tricky enough – not to mention the long-ish drive south from Boston and securing space for both bodies and cars on the ferry service.

Because of course, that’s the only way to get to this rarefied piece of Massachusetts. We’d been told how to book the ferry in advance by the helpful hosts at our B&B and it was advice well heeded. A quite straightforward drive to their establishment (using their directions), we dropped the car, unpacked the bags and decided to head down the main street of one of the districts on the island, Vineyard Haven, for a drink and a bite to eat.

That was the first problem – the strip of restaurants and cafes here is pretty small and, out of season, many didn’t open at night.

We thought we’d go somewhere and have a drink to think about our options. Hah. That was the second problem. Even though Vineyard Haven is no longer “dry”, it’s not exactly chock-full of places to go and imbibe. The only, er, libations we found were reserved for those sitting down and having a meal. Given it was near impossible to find somewhere open to eat, we felt the circular problems were well in evidence.

But, as we walked closer to the water, we found an outlet of a Martha’s Vineyard institution, the Black Dog Tavern. Its logo adorns a gazillion t-shirts, coffee mugs and tea towels no doubt seen in many homes a lot further flung. We cared about two things – finding something half decent to fill our growling bellies and being able to enjoy a glass of something while doing so.

As the address suggests, this is essentially a pub on the beachfront at Vineyard Haven. Inside is quite large and, in concession to the weather not being entirely clement most of the year, there’s a glassed in area at the back overlooking the sand and the water. It’s a pleasant aspect, if not particularly dramatic.

We decided to have something fairly light, opting for just one course each and a couple of local beers. Gluttonous husband chose the dish pictured at the top of this post, a seafood casserole. This was jam-packed with probably what amounts to a roll-call of locally sourced fish – swordish, cod, salmon, scallops, lobster and crab, combined with spinach, a sherry lobster cream sauce, topped with applewood bacon, parmesan cheese and Ritz cracker crumbs. It was accompanied by two big scoops of mashed potato.

Honestly you couldn’t see the cod for the crab. It was just too much – too many flavours and no hero. Admittedly the weather wasn’t outrageously warm outside but the dish reminded Greedy Girl of a hearty winter feed.

Greedy Girl went for the opposite – a fresh tomato and balsamic bruschetta. This was described as ciabatta toast “points” with goat’s cheese, garlic, shallots, grape tomatoes and a balsamic reduction. Toast points conjure an image of refinement; this dish was rather rustic but very edible. The balsamic brought out the flavour of the tomatoes and the cheese was nice. It could have used a little extra salty hit for Greedy Girl. 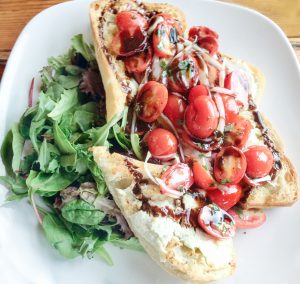 We’d normally have ordered more dishes, but a feature of the tavern is providing each table with a large warm loaf of bread and lots of butter. This more than filled us up. 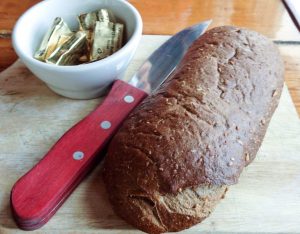 A hearty loaf of bread

And we were done. It was a perfectly pleasant place to sit, with decent food and good service. You could do a lot worse, especially in the off season.