Many moons ago, Greedy Girl and gluttonous husband took legions of friends down to Victoria’s Bellarine Peninsula to an extraordinary restaurant in the middle of nowhere – Loam. Sadly, it closed and chef Aaron Turner took a break from fine dining to pursue other options. Until now.

Turner and his core team from Loam are back, in one of the back streets in Geelong, Victoria’s second largest city, with Igni.

While this is undoubtedly a bonus for those who live in the area, it’s destination dining for Melburnians. Tourists should take note: if you’re planning a trip down the Great Ocean Road, this would be an excellent option for dinner the night before you head off. But Greedy Girl digresses.

Loam was some of the most exciting food Greedy Girl has ever experienced; during one visit with friends we also had, arguably, the best wine pairing ever. On being ushered into the rectangular dining room at Igni and shown to a table by the large windows, we looked around and spied the sommelier – who looked very familiar.

And that’s how we found out ‘the band’ was back together. Drew, the sommelier, the front of house manager and the chef are partners in this new fine dining venture.

There’s no menu at Igni – diners can nominally choose from five or eight courses, but the reality is it’s open season – if you opt for five, the wait staff will check in on you as the menu progresses to ask if you’d like more. If you order eight, and start to feel full, you can pare back. Indeed, there are so many little additions, the actual number of dishes is way higher.

On a cool day, Igni is a cool restaurant. The colour scheme (even on the plate, for the most part) is muted and the tables by the windows have a bit of a heat transfer issue, exacerbated by the polished concrete floors. Greedy Girl is ashamed to admit she didn’t dress for the conditions and felt a bit chilly. Bring on that food.

Given we were driving, we couldn’t do our usual bottle of champagne, so we opted for a few glasses. Gluttonous husband had a local light ale – a Prickly Moses ‘Otway Light’ – which he pronounced very enjoyable. Greedy Girl started, as usual, with bubbles, but another unusual offering – a Portuguese sparkling, Montahna Superior Bruto Malvasia. It was very enjoyable.

First up were a selection of snacks. The table suddenly became very crowded, with seven small plates arriving in quick succession. We opted to start with the hot dish – zucchini flowers stuffed with mussels. Generally, Greedy Girl isn’t a fan of mussels but she’s had them several times of late and enjoyed them – especially in Venice at the hugely surprising Da’a Marisa. This was perfectly edible and nice to have something warm. 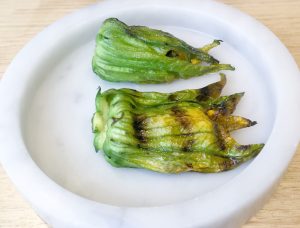 Then, Greedy Girl sampled one of the dishes of the day – crispy chicken skin, topped with creamy cod roe. OMG. This was seriously yummy. The chicken skin was so puffy, she wondered if it had been deep fried, but no, it had just been oven dried. The combination here is incredibly good. Even non-fish eaters should give it a go. 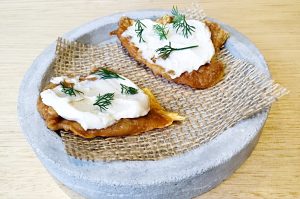 The rest of the snacks were served at room temperature. Two baby ‘breakfast’ radishes went down the hatch. Greedy Girl isn’t a huge fan of radishes served on their own but these were reasonably mild. 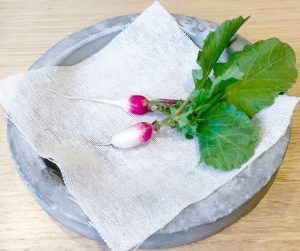 Next we tried the air-dried beef – kind of like a jerky. Greedy Girl didn’t enjoy the texture of this. It was quite hard to bite through and chew. Gluttonous husband said he quite liked it. Over to him. 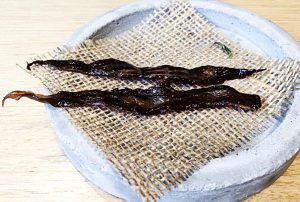 Next we sampled the guanciale. This is essentially a plate of pork fat but it was very delicious pork fat. Yummy. 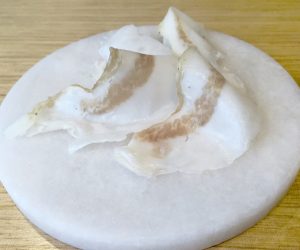 Another dish just looked like a pinch of herbs. This was salt and vinegar saltbush – and it tasted just like the crisps of the same flavour, but presumably a little better for you. Delish. 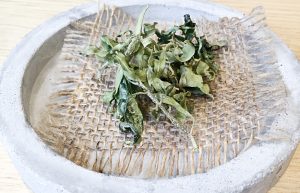 Our final snack was ‘duck on a stick’. Local duck ham was wrapped around fine grissini. Greedy Girl thought it tasted almost fruity, so she enquired. The sommelier told her the ducks were raised on a diet of figs and other fruit. Well, there you go … 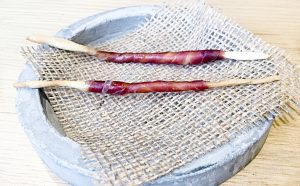 Duck on a stick

It was time for the menu ‘proper’ to begin. With Greedy Girl nursing a glass of Provenance ‘Tarrington’ Pinot Gris from Henty, first up was a dish of chargrilled leek with cultured cream and dill. The caramelsation of the leek was delightful and this was a fresh and zingy dish. We mopped up every last trace of the sauce with some excellent rye bread, baked locally from flour sourced north of Hobart. 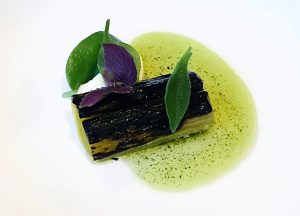 Next was cuttlefish with celeriac and lemon. A pleasing little bundle in the middle of the plate, again the play of flavours was light and enjoyable. The texture of cuttlefish isn’t something Greedy Girl particularly relishes but it played out well here. 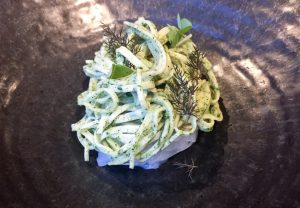 Cuttlefish with celeriac and lemon

We then moved to the dish pictured at the top of this post, Western Australian marron with ‘pil pil’ and cucumber. Pil pil is a Spanish tapas dish, usually containing prawns. This was amazingly light and delicious. The marron had barely been cooked in some Spanish butter and fish sauce and was just luscious. It combined well with the slightly pickled cucumber.

Next, we moved to slightly heavier dishes. First up was Jerusalem artichoke with Wagyu and potato. The very thinly sliced Wagyu was layered over the top of the dish. The very clever chefs managed to make this seem light, yet hearty. Another delightful dish. 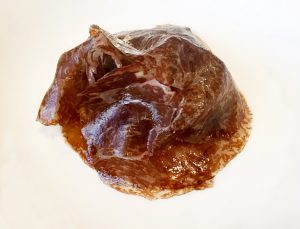 Greedy Girl was on to her third glass by this point – a Charlie Swan ‘CS’ Shiraz from Heathcote. This was big, bold, fruity and totally drinkable. Hmmm, methinks a trip to Heathcote should be on the agenda … Our next dish was lamb rump with parsnip and radicchio. 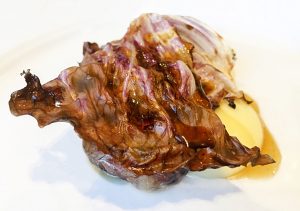 The creamy parsnip was a triumph and worked brilliantly with the lamb. Greedy Girl again isn’t a huge fan of radicchio, finding it too bitter for her palate, but gluttonous husband (he who loves his IPAs and other bitter beers) was in heaven.

We’d already had a power of food but weren’t feeling at all bloated. A solicitous enquiry as to whether we’d like to take more savoury dishes was declined though – we decided to stay with the main program, rather than risk groaning all the way back to Melbourne in the car.

Greedy Girl continued to sip her red while the cheese course was brought out. This was ‘queso de cabra’ with rosemary and persimmon. This is Spanish goat’s cheese, aged usually for a month. It was very light and a good foil for the fruit. 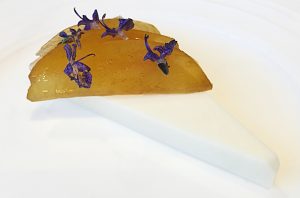 It was time for dessert. First was a fun-looking dish – rhubarb, buttermilk and spice bread. Essentially it came out as a bowl of foam and the spoon was required to dig down to get all elements of the dish. Very clever, very light, very tasty. 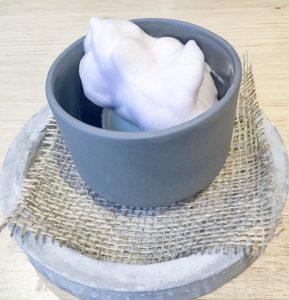 Our second dessert was ‘young pepper’, strawberry and shiso. Greedy Girl usually doesn’t eat ice-cream but this was a very pleasant plate of food. Pepper and strawberry is a classic combination. Our kind sommelier Drew treated us to a glass of rosé champagne ‘Raides Bulles’ (say it aloud with a French accent to get the pun), which he said would energise us for the trip home. It was delightful. 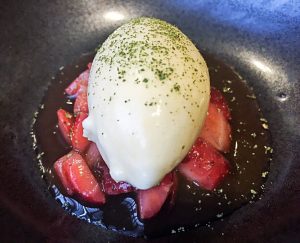 Ordering a freshly brewed black coffee, we were then presented with some warm and crusty Madeleines and roasted pineapple. 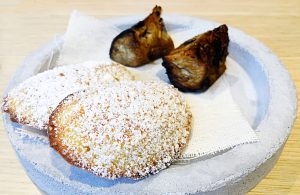 And we were done, departing with full but not uncomfortable stomachs, and fortified for the hour-long drive back to Melbourne, vowing to return and try a wine pairing. From the look of the dishes going to other tables, the chef has an incredible repertoire – we have high hopes of getting a varied menu on our next visit.

Igni (named for its association with ‘fire’) is in a minimalist-looking shop-front on a street almost guaranteed to have no passing traffic. Visitors to Geelong need only navigate towards the very large cathedral up on the hill, St Mary’s Basilica. Happily, there’s also quite a lot of car parking available – with one caveat. The local football ground is not far away – if you’re planning to drive to the restaurant, check first that there’s not a game on.

An alternative if you’re coming from Melbourne for a lunch sitting is to take the train. The restaurant is around 15 minutes’ walk from the Geelong South station – perfect for a post-lunch promenade.