The Champagne Sunday brunch is a wonderful thing, especially when travelling through Asia. Like a lot of big cities, Bangkok is spoiled for choice. Having tried the excellent Voila at the Sofitel Sukhumvit last trip, this time we headed to the Tables Grill at the Grand Hyatt Erawan.

This is a glamorous-looking spot. Much of the room is kept reasonably dark and moody so it’s a nice contrast to the light and warmth blazing outside. Shown to a table near the wall, we settled into wide, high-backed upholstered lounges. It felt like a little private booth – very comfortable.

The tipple here is Moët et Chandon – served from piccolo bottles. On reading TripAdvisor, Greedy Girl noted some of the criticisms of the brunch were the fact that the champagne bottles were so small. That doesn’t make any sense whatsoever – the small bottles are opened with enormous frequency and the staff take great attention to ensure glasses are filled up. The champagne is always full of frizz, cold and delicious. If you don’t want to take the champagne option there is also a good selection of red and white wines.

There are five dishes on the ‘house menu’ as well as a number of different stations, each manned by a chef. The selection of stations isn’t as comprehensive as our previous experience at Voila but covers off everything we need. The food here is European so don’t come looking for Thai delights. Still, it’s a nice change of pace after days of curries and noodles.

Glasses of cold water come promptly to the table with a selection of breads and some exceptionally yummy black truffle butter. Greedy Girl decided she needed a bit of sustenance before getting into the champagne in a big way, so headed for the lobster bisque ‘table’. 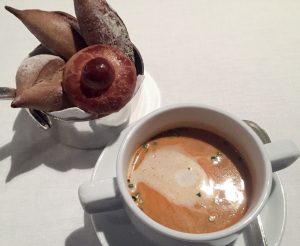 The chef spooned in some cream to the bottom of the bowl, along with a few pieces of cooked lobster and then ladled in the rich bisque. It was a very pleasant way to kick off.

Gluttonous husband zeroed in on the oyster station. Two French varieties were freshly shucked to order – Fines de Claire and a Normandy oyster. He preferred the latter, saying it was sweeter. 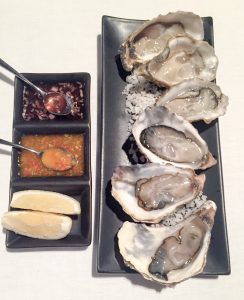 Greedy Girl moved to one of the menu dishes – a poached egg with a horseradish hollandaise sauce and smoked salmon. This was served on a thin crouton. The egg was perfectly cooked – it sliced open to reveal a lovely runny yolk but the horseradish in the sauce was a little too dominant and the salmon could barely be tasted. Greedy Girl took the lemon wedges from gluttonous husband’s oyster plate to squeeze over the egg, feeling it needed a touch of acidity. 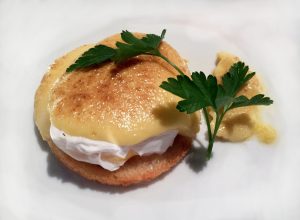 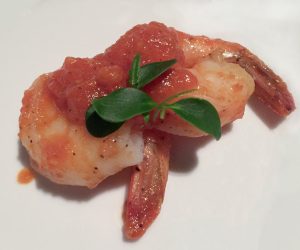 After that morsel, he decided to try the beef tartare hoping it would also be prepared to order. He was somewhat disappointed to come back with a dollop of pre-made tartare that had a very pronounced tomato flavour. That’s the joy of this style of eating – what you don’t like, you don’t have to finish. You simply push the plate to the side and go in search of other delights. 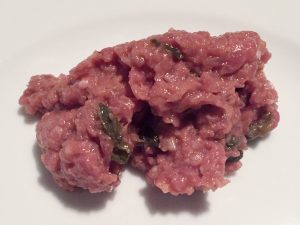 Not the greatest beef tartare

Greedy Girl decided it was time for risotto. This was also prepared a la minute by the friendly chef pictured at the top of this post. He explained that the risotto had been cooked to about 80% readiness in the kitchen and he finished it to order. This is a champagne and truffle risotto, with lashings of grana padano cheese, carved from a giant wheel on the side of the cooking station. It was delightful. Gluttonous husband made a note to go back and get a serving later in proceedings to help soak up some of the champagne. 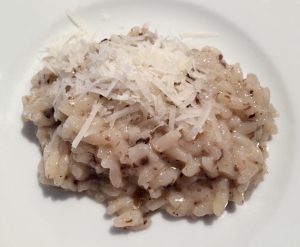 We both had another of the menu items – a pan seared slice of foie gras served with a cherry sauce. This was a complete and total yum. Foie gras is such a luxury item; Greedy Girl finds it near impossible to pass on an opportunity to eat it. It goes perfectly with fruit and the cherries were a beautiful touch. Delish. 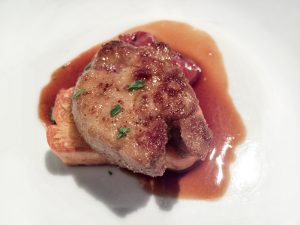 Gluttonous husband stayed with the duck theme, taking a slice of duck breast cooked sous vide with a pomme purée, green beans and an orange sauce. The duck breast was still quite pink and cooked just enough that it wasn’t chewy. The orange sauce was a little too strong but the potato and the green beans were delightful. 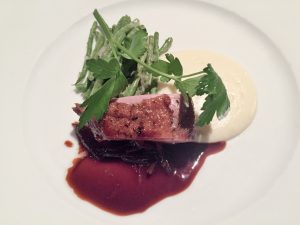 It was time for a retro dish – lobster thermidor. Greedy Girl and her mother used to love ordering that during birthday dinners out. It’s not entirely common to see it on a menu anywhere these days. We relished the beautifully-cooked tail meat but our tastes have grown – we prefer the sweetness of the lobster meat with very little adornment. Still, this was a treat. 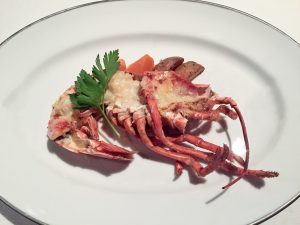 We started chatting with a table of four near us; they apparently ordered three servings of the lobster each. Greedy Girl applauds their style.

We moved back to meat; Greedy Girl took some slices from the charcuterie selection. Her favourite was definitely the jamon Iberico, shaved from the trotter at the station. Gluttonous husband also had some jamon a little later on but paired it with a selection of cheeses. He was particularly taken with the bite of the blue cheese on offer. 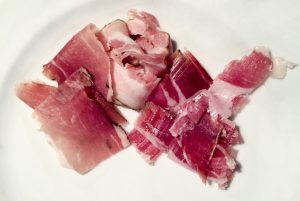 Greedy Girl decided to try a glass of red with her meat dishes. She took the Valpolicella Superiore 2012 from Capitel Nicalo, Tedeschi. One of her favourite Italian reds, alongside a good Montepulciano, it had a beautiful nose and was very easy drinking.

We decided to try the roast beef station to end our savoury courses. The meat had been cooked to almost well done by this point. Given neither of us like over-cooked meat, the chef relayed this to the kitchen and a slice was prepared at medium doneness for Greedy Girl and much rarer for gluttonous husband. It was a lovely touch and we both enjoyed the dish, especially another serve of the delicious potato purée. 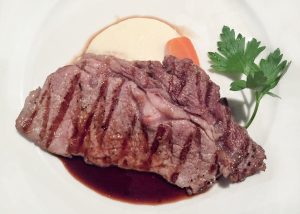 Greedy Girl headed for the dessert room, choosing a lavender panna cotta and a selection of chocolate treats. She admits she chose the panna cotta purely because it was such a pretty colour, but she didn’t warm to the flavour. The chocolate delights were sensational, though. 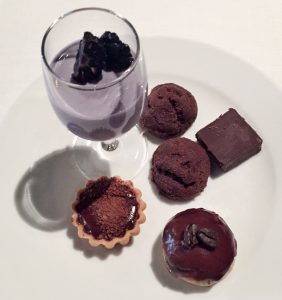 A selection from the dessert ‘room’

We opted to finish with some very decent double espressos – or so we thought. 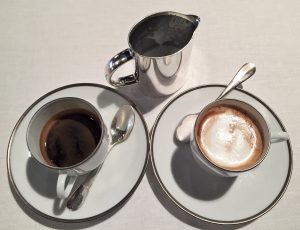 The friendly group at the next table invited us to join them and we ended up having a few more drinks and another coffee with them. Feeling very full and rather awash with the beautiful champagne and wine, we headed into the early evening, having enjoyed nearly six hours of exceptional service.

This was around A$150 exceedingly well spent. If you’re in Bangkok and at a loose end for a Sunday lunch, this is heartily recommended.