Trainspotting – why taking the ICE is worth it 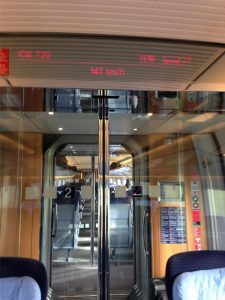 Herzlich Willkommen an Bord des ICE 720! Welcome on board the ICE 720, says the conductor, as the train departs Munich right on the dot of 10:55 for Brussels via Frankfurt.

For a change I’m travelling with my husband, who is the real life Dr Robert Langdon. He’s a regular on this route but I haven’t taken the ICE (Intercity Express) for about a year.

After my recent London train experiences—late, dirty, tired, old and/or cancelled—I marvel at the sleekness, air-conditioning that actually works, and the mood lighting which reminds me of being on an Airbus A380. There are mirrored panels at both ends of the carriage above the doors, telling you exactly where you’re going, the speed at which you’re travelling and apps that you can download to tell you how much CO2 you’re saving by taking the train. Today we’ll be hitting some of the high speed stretches at around 300km per hour between Frankfurt and Cologne.

Unlike me, “Dr Langdon” prefers long train trips over flying because he can work. I wonder if he’s right and check out the seats – they are quite large, covered in purple dotted velvet, clean and comfortable. There is one power point between each seat (ours worked) and wifi for a fee.

Unfortunately I didn’t manage to get online via iPhone or laptop but I didn’t try very hard either. You can choose to sit at a shared table or with a simple fold out table and for €4.50 (second class) or €5.90 (first class) you can reserve a seat, something Dr Langdon always recommends. If you want to work on your laptop, he also recommends booking a shared table. 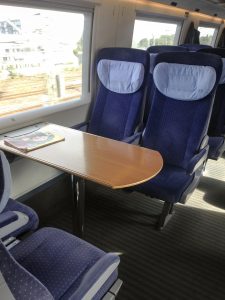 Our carriage has a nice feel about it, it’s not crowded and as the Deutsche Bahn says on its website, the ICE is quiet when it’s zooming along. As our speed increases, I keep an eye on the mirrored panels and the LCD screen near the doorways and notice our top speeds are around 280km per hour. Faster, faster…I want more speed!

The ICE is a true marvel of German technology and engineering. First introduced to the market in 1991 and now into its fourth generation, there are five different models. The trains are high quality, slick (various models have won prestigious Red Dot Design Awards) and generally reliable; perhaps the Porsche of trains. The windows, carpets, seats, head rests, tables and bins are all very well maintained and when you compare it with the Eurostar launched in 1994, the ICE is excellent value, and will give it some competition with London routes scheduled for 2018.

We start to get hungry and decide to test out the restaurant. It turns out to be a misnomer – there are four sets of four large seats with share tables – what a disappointment! We are left standing at bar tables to eat our pulled pork sandwiches and sausages, which aren’t worth writing about. Actually I’ll just say that for me, BBQ sauce and mayonnaise on a roll don’t mix and Dr Langdon’s sausages are slightly spongy. Also on offer is the standard tea, coffee, wine beer etc which are fine.

I take a mental note – the main train station at Munich has reasonable food choices. I should have bought something to eat on the train. Vincenzmurr does good sandwiches with schnitzel, meatballs and potato salad, and Rischart does fab German breads and cakes. Perhaps Dr Langdon and I have been too spoilt for food on the Österreichische Bundesbahnen (ÖBB, Austrian railway), which has a proper restaurant car with tables and tablecloths and serves food catered for by Henry Am Zug. We’ve had some rather tasty gulasch soup and veal patties on the ÖBB over the past two years and watched others eat curries, sausages and sweets – it all looks and smells delicious.

At the Frankfurt Airport stop, I run to search for something decent to eat in the station (the options are very limited there) and we have 20 minutes to change for an ICE-Sprinter train to Brussels Midi. It’s pretty straightforward as we leave from the same platform. There isn’t much difference between the ICE 720 and the Sprinter except we’re in the “quiet” carriage, it’s packed with people standing and sitting on the floor and shortly after we leave Frankfurt we finally hit 300km per hour!

For large stretches we hover around this speed; it definitely feels fast, it’s not that easy to walk around and at times I feel slightly giddy and snooze on and off. In the meantime, Dr Langdon has been happily working away on his laptop doing all things academic. When we enter Belgium, the Sprinter slows right down but we arrive in Brussels right on time at 17:35.

The ICE trains are a great example of the German approach towards public transport and services. You invest time, thought, planning and money to get high quality output. You look after things, think about how to make them better, and keep investing and upgrading for the future. I highly recommend taking the German ICE.

Tip – If you’re going to use the ICE or any other German trains on a few trips either within Germany or from Germany to overseas or back, it could be well worth your while to buy a Bahncard – a discount card which is good value.