Where to eat Mornington Peninsula – Ten Minutes By Tractor

In all their travels, Greedy Girl and gluttonous husband have been to very few wineries outside of Australia. Indeed, in the days when Greedy Girl refused to get on a plane, touring Australia’s great grape regions (by car) was their preferred holiday option.

As such, we’ve been to a lot of winery restaurants and brought home a great many dozen bottles. But having been back on the road (or should that be ‘in the air’) for the last eight years, a trip to an Australian winery is a less frequent occurrence.

And so, for a recent treat, we ventured down to Victoria’s Mornington Peninsula, just over an hour’s drive south-east of Melbourne (when the freeways are playing nice). It was time to revisit a restaurant that consistently delights critics, with a bonus that it is part of a very good winery – Ten Minutes by Tractor.

This is in the Red Hill area, home to a great many acres under grape. An unassuming timber building houses the tasting area and a relatively small dining room, with large windows overlooking the vines.

The chef is Stuart Bell, who has a solid background in fine dining – especially under the tutelage of two of France’s leading expats in Australia, Philippe Mouchel and Jacques Reymond. While the techniques here are overwhelmingly French, Bell showcases the best of the locally-available produce in a highly seasonal menu.

While the surrounds are understated, the staff are suited up and there is a sense that this is an experience to impress diners. While the restaurant offers a la carte, there are two tasting menus of five or eight courses. We wouldn’t live up to our pen names if we didn’t take eight, accompanied by matching wines.

We couldn’t quite settle in; the staff needed to attend to some rather large wasps buzzing around our table (or perhaps trying to get the bush of bay leaves outside). Once they’d been caught Greedy Girl could be seated and relax. She began with a glass of the winery’s own Blanc de Blancs, which our sommelier told us had recently been voted by Decanter magazine as the best non-French sparkling of the year, although Greedy Girl can’t find that reported anywhere else. It was a 100% chardonnay sparkling and, for an aperitif, quite rich.

Gluttonous husband opted for a gin and tonic made with Four Pillars gin from the Yarra Valley. It had an incredible flavour which, for gluttonous husband, wasn’t enhanced by a slice of orange in the glass, much preferring lemon or lime with his G&T.

And so, we turned to the business of food. Having communicated what we would prefer not to eat, and being assured that none of Greedy Girl’s much-despised beetroot was on the menu, we kept sipping our glasses and awaiting a feast.

The service here is very knowledgeable and quite personable, especially our wine waiter, who hails from Poland, and loved to give us the background of all the different wines we sampled over the course of the menu. Greedy Girl wishes she’d recorded him to be able to bring you some of his extensive reports. Alas, eight courses, eight glasses of wine … Greedy Girl’s lucky she can remember her own name.

For the most part, the meal was very well spaced and timed to our eating rhythm. One thing Greedy Girl doesn’t like is not being able to finish one’s aperitif before the first course (and, the first wine) arrives, but she is getting ahead of herself.

First up was the amuse bouche of a sliced cherry tomato with olive crumb and a little puff with tuna and a creme fraiche mayo. It was beautifully presented and the flavours were enjoyable, if not a ‘wow’. Still, we were very happy. 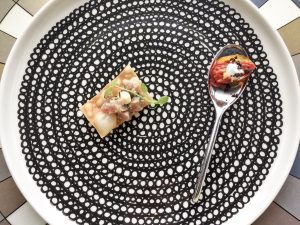 Our first course was local goat’s cheese with asparagus, pink grapefruit and a selection of other grains and pulses, including quinoa. It was accompanied by a German wine, a 2014 Hans Wirsching ‘Scheurebe’. This was surprising on many fronts – given we were eating in a winery, we fully expected most wines served to be from its own production. Second, this was an utterly delicious white – both on its own, and with the dish. It had quite a rich flavour that Greedy Girl thoroughly enjoyed and some overtones of grapefruit that were quite extraordinary. Generally, Greedy Girl steers away from whites because a great many (to her) seem to lack any discernible flavour. The dish was light and tasty, if a bit cold. The addition of the grapefruit was worked brilliantly with the cheese and the wine. 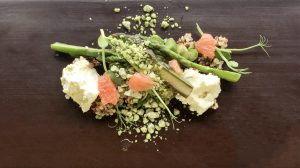 We also jumped into some beautiful bread – damper studded with black olives and a very good sourdough. It was accompanied by caramelised butter and a dish of very peppery olive oil. During the course of the afternoon, the wait staff ‘offered’ to take away the bread and butter several times but it was too good to part with – especially the flavour of the butter which was an amazing foil for the other tastes as the menu progressed.

Next was a mackerel tartare dressed simply with cherry tomatoes and cucumber. It was served with a Viognier, a La Combe Pilate 2015 from M Chapoutier. This was a wine Greedy Girl did not like on its own, but it was a brilliant match for the oiliness of the fish which, in itself, was absolutely superb. The balance of ingredients here was a little skewed; there was a lot of fish but not enough of the accompaniments. Perhaps it’s Greedy Girl being greedy, but … 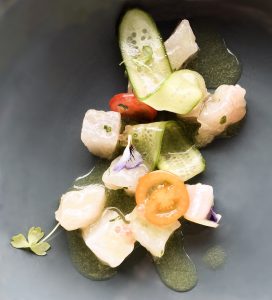 Our next dish was prawn with apple, served with a 2011 Kiralyudvar Tokaji Furmint from Hungary. The prawns had a grilled flavour which was very attractive and were plump and firm. Combining them with apple was a master stroke and brought out the qualities of the Tokaji in spades. The same ‘furmint’ grape is used for both the dry and sweet wines. It wasn’t until Greedy Girl and gluttonous husband travelled to Hungary that they became aware that it wasn’t only a dessert wine. 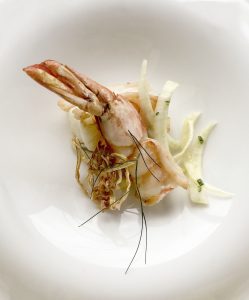 More fish was next, accompanied by one of the winery’s own varieties, a 2011 McCutcheon Chardonnay. The waiter brought out one of the few props in evidence on the day, a relief map of the peninsula to show where the grapes were grown. Greedy Girl told him Chardonnay was one of her least-liked varieties with the only exception (so far) being the Leeuwin Estate Art Series from Margaret River in Western Australia.

On its own, Greedy Girl is not about to shelve her Art Series to swap it with this, but with the halibut, dressed beautifully with a lettuce purée, grilled baby lettuce and a purple fondant potato it was perfectly drinkable. Greedy Girl can’t remember ever enjoying purple potatoes, with perhaps the only exception being the crisps at Amaru in Melbourne’s Armadale. The colour looked fabulous on this plate but the taste just left us cold. The combination of lettuce and purée with the fish was delightful although a very small quibble is that the fish itself was a little dry. Still, we polished it off. 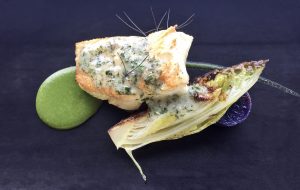 After a few glasses of white, it was time to go red. First up was a Simla ‘Field Blend Rouge’ from Tasmania. It was paired with a quail dish, which sat on a pool of lentils, some rhubarb relish and a perfectly fried quail’s egg. The wine was very unusual, with a cloudy colour, but it worked a treat with the food which was very, very enjoyable. The quail breast was beautifully moist and Greedy Girl loves lentils. We were given some house-baked brioche buns to mop up the sauce; these were sheer buttery goodness, although gluttonous husband wasn’t a fan. Greedy Girl was happy to hoover his share. The wine was unusual – a blend of Pinot Noir, Gamay, Cabernet Franc, Chardonnay and Riesling – and it’s unfiltered, giving a cloudy result. It worked well with the dish. 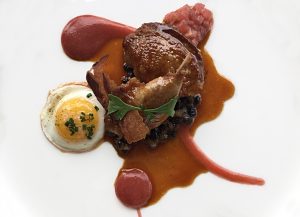 A celebration of quail 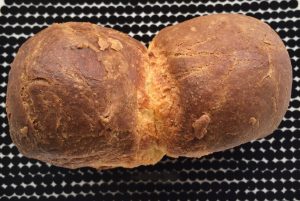 Another Ten Minutes By Tractor wine was served next, a 2013 Wallis Pinot Noir. Compared to the other wines we’d enjoyed, it wasn’t a rave. The area is noted for the grape but this just seemed too insubstantial. It was paired with a duck dish, served with a honeyed duck jus, pumpkin purée, broccolini and a nutty crumble. We both felt the honey was too strong a flavour and made the dish too sweet. The vegetable elements worked well together but we both wanted to eat the duck separately. 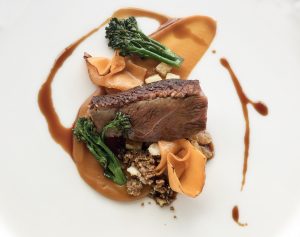 Our final savoury course was beef (pictured at the top of this post), accompanied by a 2014 Achaval Ferrer Malbec from Argentina. What a splendid combination this was. The perfectly soft beef was accompanied by a garlic sauce and dots of mushroom ketchup and the wine was a match made in heaven. Greedy Girl can probably count on one hand the number of times she’s had Malbec but this was definitely a winner. Our wine waiter kindly refilled our glasses towards the end of the dish.

We moved to the pre-dessert, a mango sorbet, topped with a whipped confection made from cucumber and mint. This was a wow. Light, refreshing, the perfect bridge from savoury to sweet. Our final pouring was a Sauternes, a 2011 Chateau Filhot, to accompany the chocolate and pistachio dessert, again with grapefruit segments and a delightful foam – Greedy Girl wishes she’d taken notes to remember what that was made from but it was incredibly light and a little bit tangy. 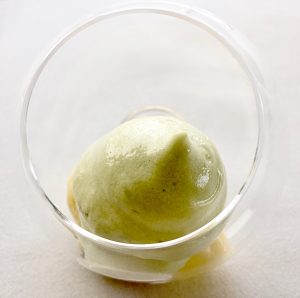 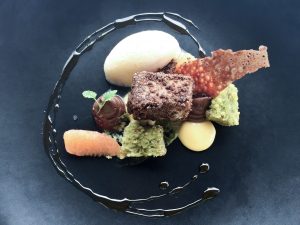 And we were done. Gluttonous husband sipped his dessert wine and we enjoyed a little chocolatey truffle as well as a berry friand to finish.

All told, we’d been there for five hours and had a splendid time. We were never rushed and the staff seemed genuinely happy to see our enjoyment. It really is a bastion of fine dining in the middle of wine country.

Ten Minutes By Tractor is a relatively small restaurant and fills up easily. Nowadays we prefer to have large meals like this during the day and Greedy Girl wonders if it is slightly easier to get in for lunch than dinner. Contentedly we trundled out to our shuttle service (pre-arranged – we’d been warned that taxis in this part of the Mornington Peninsula are notoriously unreliable) and motored back to our accommodation.

This is great destination dining; it may not have been as inventive as, say Geelong’s Igni, but it was a marvellous food experience.