Sydney’s not a city that gets going particularly early, as we found to our dismay on a previous weekend visit (see the blog Sydney coffee here). On a weekday morning, there are plenty of coffee bars dotted in and around the central business district but finding a decent breakfast in some sectors is challenging.

Not a fan of paying exorbitant amounts for hotel breakfasts, Greedy Girl scratched her noggin’ in trying to come up with a place to meet her geek whiz friend The Hipster before we both headed for our respective workplaces. Half way between his and hers was also tricky – essentially that would be the middle of Darling Harbour. Not enamoured of the idea of choosing a packet of salt and vinegar chips and a diet coke from the pedestrian bridge kiosk, we settled on Cockle Bay Wharf.

This is on the ‘city’ or eastern side of Darling Harbour. It has huge natural advantages – potential for sun, water, a decent outlook for al fresco dining – but it just feels like a bit of a tourist trap. Still, at 8am, and fairly close to that magical halfway point – it was open…well, some of it.

Cockle Bay Wharf consists of a number of establishments over three levels. We headed for the waterside promenade and a cafe called Baia The Italian. Its website promised a small breakfast menu and while the surrounds were quite deserted, it meant we could have a quiet and relatively prompt meal before we went our different ways.

This wasn’t a sunny morning, rather, a typical overcast, humid Sydney summer’s day with spots of rain threatening to force us inside. Happily, it didn’t develop and we were able to get through without being drowned. We were the only patrons this particular morning; the area is rather different after work where the bars and restaurants here and further along the harbour at the King Street Wharf can be rather crowded. The Hipster had already had his morning coffee, so we moved straight to the business of ordering food.

Greedy Girl took bruschetta pictured at the top of this post – essentially tomato, feta cheese and avocado atop soy and linseed toast. It looked quite fresh and festive but the flavours were underwhelming. The dish was crying out for seasoning and a squeeze of lemon would have added to it. The olive oil was quite nice but it didn’t have a peppery quality which would have also worked well.

The Hipster had roasted field mushrooms and tomato with wilted spinach and poached eggs. The eggs met the standard test – when sliced open, the yolks emerged with a gratifying ooze. The tomato was fine and the mushrooms were cooked well. The downside was rather watery spinach. 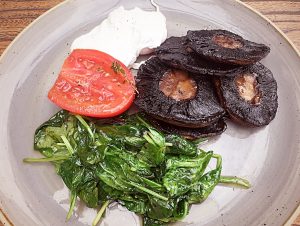 Given we both had jobs to go to, we were there for a good, not a long time. Greedy Girl ordered her customary piccolo coffee and it arrived without delay – as you’d hope – there wasn’t anyone else crying out for attention from the waiter. The coffee was nice – it had a good colour and a reasonable amount of oomph. Greedy Girl also couldn’t stop herself from sampling the little biscuit on the side. 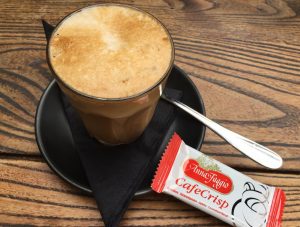 And we were done. As usual, the Hipster and Greedy Girl argued over who should foot the bill. Greedy Girl moved purposefully towards the cashier’s desk, proffering her credit card. And therein was the problem – their system was not online and Greedy Girl didn’t have enough cash on her. The waiter suggested Greedy Girl leave her credit card details and the payment could be processed later. Thanks, but no thanks. Between us, we managed to scrape together barely enough paper money to settle up and depart.

This area of Sydney is a real enigma – it should have absolutely everything going for it and a steady stream of visitors morning, noon and night. Still, it was an OK if not spectacular spot to snack and chat.