There’s a lot going on at Pascale, one of Melbourne’s new restaurants generating some buzz in the city.

On the first floor of the QT hotel in Russell Street, in the heart of Melbourne’s Central Business District, Greedy Girl is old enough to remember when the site was occupied by a rather down-at-heel cinema complex. While one side of the road, in the block between Collins and Bourke Streets, seems to have undergone a renaissance, the other remains caught in a 20th century time warp.

But we weren’t there to contrast architectural styles. Pascale is the new offering from noted chef Robert Marchetti (the creative food director for the QT Hotel chain) and executive chef Paul Easson. Marchetti has been around the food scene for a great many years with a series of restaurants enjoying their moment in the spotlight. It must be said that some have lasted longer than others but he’s certainly a talent in the kitchen. Paul Easson also has a significant pedigree with a stint at Rockpool before joining the QT group.

The first floor of the building has a number of spaces – bars with TV screens and a large dining area abutting the open kitchen (see the picture at the top of this post). Apart from a long strip window on one side and what filters up from the stairs, there’s not a lot of natural light. The decor is best described as eclectic – a mishmash of styles, features, textures and colours (including the restrooms, but more on that later). In the dining room itself, the tables are dark timber with very heavy leather club chairs. We were looking for some snacks straight after work and found ourselves to be the first patrons for the evening.

Given Marchetti’s background as a doyen of Italian cooking it’s perhaps surprising that the menu offering is dominated by French influences, with a few Italian and Asian touches. Settling in with a White Rabbit dark ale and a glass of Prosecco, we chose four plates to begin with and asked if we could share each, one at a time. We were happy to take the kitchen’s lead in terms of what should come out first.

Shortly thereafter, some warm, crusty bread arrived at the table, along with a pat of butter. Gluttonous husband dived in, putting his bread and butter plate front and centre. He was still pulling pieces of bread apart when the waiter arrived at the table to set it with plates and cutlery for the first dish. The waiter tried to rearrange things while gluttonous husband was leaning over his plate, eating. Well, let’s just say gluttonous husband’s booming voice was put to use. Each time the waiter approached the table subsequently, he asked if he could ‘move’ dishes. It was an unfortunate situation but perhaps not smart to try to move a plate from a diner when it’s still in use.

But we moved on. The first dish to arrive was Pascale’s take on steak tartare. This was milk-fed veal and ox-beef tartare, served with grilled enoki-shimeji mushrooms, a quail egg yolk dressing and topped with a gruyère crisp. The dressing was presented inventively in the eggshell and we poured it into the hole in the middle of the meat. It was tangy, spicy and absolutely delicious. The crisp on top shattered beautifully. All told, a great start to the food. 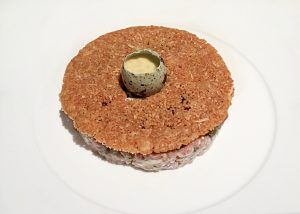 Next was a tartare variation – a “Sommerlad” chicken truffle terrine/pissaladière with a tartare of gherkins, capers, parsley and mustard. Sommerlad is a poultry farm from Tenterfield in the New England area of NSW. Again, it had a cheesy crisp on top but this one was somewhat more oily to the touch. The dish was perfectly nice but after the big flavours of the first plate, it felt a little muted. We both agreed it would have been better to come out first. 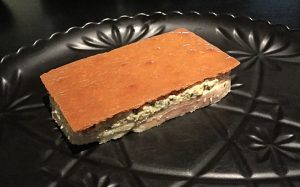 Next, we moved to crab cakes. On being told there were three in a serve, we were asked if we wanted to ‘super size’ the dish to include four, and so we did. They were presented with celery hearts, on top of an avocado and lime mousse, lemon balm and black sesame seeds. The menu says there’s also pancetta but we couldn’t discern any. They did have a little bit of spice though from some cayenne pepper. They were quite enjoyable and, happily, the crab meat had been cleanly picked through with no trace of pesky shell. 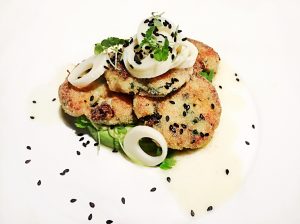 Our final savoury dish was zucchini flowers. These were filled with ashed goat’s curd, crumbed with polenta and served with a tomato and vodka sauce and avocado. It was an exceedingly festive looking plate but the flavours weren’t quite what we hoped for. For Greedy Girl there was too much of the curd and not enough of the sauce. While she didn’t mind the polenta, gluttonous husband felt it was too heavy. Indeed, the major flavour of the dish was the cooking oil, which was a little disappointing. 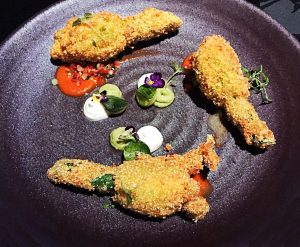 But we decided we couldn’t leave without trying something sweet and chose the eclairs, economically described as ‘classic’ and ‘not classic’. Served dramatically in a presentation box, the classic variety was (of course) chocolate and the other was a salted caramel, sesame toffee version. Both were particularly delectable. 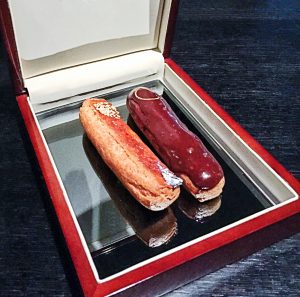 A box of eclairs

And we were done – but before we headed for the exit, a trip to the restroom was required. And here it is – rather over the top! Greedy Girl is reliably informed that the same decor exists in the men’s room as well. 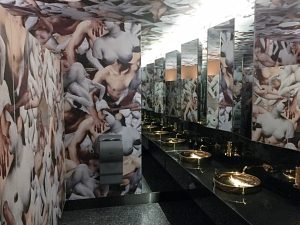 The over the top restroom

Pascale isn’t a particularly inexpensive place to dine – our bill came to just under A$160 and there’s a fee to pay with a credit card. It was interesting food and a dramatic space but, on a busy night, it would be exceptionally noisy.