Just over an hour’s drive south-east of Melbourne, the Mornington Peninsula is a great destination for travellers. It’s an easy trip, with freeways covering most of the distance, and a haven for a host of activities, including great wineries, foodie experiences, beaches and golf.

In the height of summer it can be very crowded, particularly during school holidays. Our most recent visit was just before the busiest season and we found the roads easy to navigate with minimal traffic, excellent food and a number of options for accommodation.

We opted, however, for the hotel accommodation at Peppers Moonah Links. The links are a leading golf course which has hosted some major Australian tournaments. We expected a reasonably high standard and first impressions were decent. The hotel reception is effectively in the golf course clubhouse. A small sign is on the wall next to the check-in desk. The area also houses the pro-shop, the main restaurant and the ‘Spike Bar’. 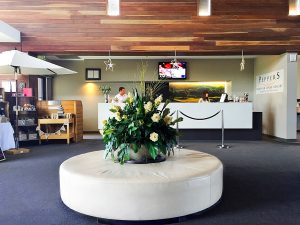 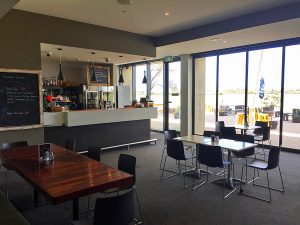 We were, admittedly, early but we were looking to just leave our overnight bag and head off to a long and leisurely lunch at Ten Minutes By Tractor, one of the area’s best fine dining restaurants. We communicated our plans to the receptionist and asked if there was somewhere we could leave our bag before the room was ready. The answer to that is: no. We were told to leave the bag in our car. One wonders what would be on offer if you arrived by shuttle bus, but we certainly weren’t given any option. So, if you’re driving to stay here, be aware you might be leaving your belongings in a hot car for a while.

The shuttle service (we were told by the restaurant that standard taxis are notoriously unreliable on this part of the Mornington Peninsula) worked just fine. It cost us A$90 for the round trip, which was possibly the cheapest quote – some services were double that.

On returning from lunch (and enjoying a fine wine pairing), we were somewhat bemused to be told we needed to drive our car up to our room. It would have been very helpful to be able to park the car in that area when we arrived and simply walk to and from the reception area. It was only a couple of hundred metres but, still …

The accommodation here is in low-rise buildings which overlook the golf course. There was no elevator but thankfully we were only on the first floor and carrying up a small wheelie case was no big deal. The room itself, the least expensive option available at the resort, was quite spacious. It faced west – so the late afternoon sun streamed in and made the room quite warm. It was certainly too warm to sit out on the balcony overlooking the course – not that the hard wooden bench seating looked particularly inviting. 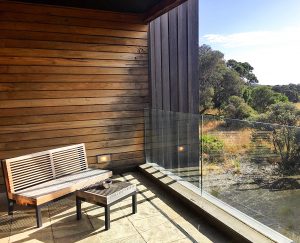 We closed the curtains and blinds (next to the bath) to cool the room down, although there is an air-conditioning unit facing the bed. The upside of the room’s location is that it remains quite dark in the morning – a benefit for those who like to sleep in. 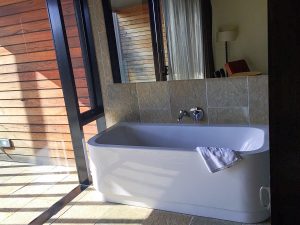 A bath with a view

The room consisted of several closets (one containing terry-cloth robes), a small desk and a king-sized bed (facing a small television screen). A sliding wall separated the sleeping area from the bathroom, with its reasonably large vanity unit, separate glassed in shower and toilet. The shower only had a large ceiling rose – tricky for women who don’t want to get their hair wet, but the water pressure and temperature were fine. The toiletries were also acceptable. A major bonus was the provision of soap (as well as shower gel). 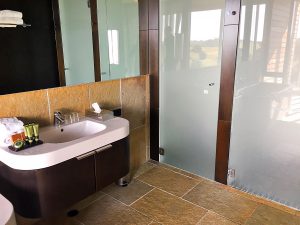 The door was very large, heavy, and noisy. We closed it to maximise the darkness of the room but it was an irritation when getting up in the middle of the night.

The bed was king-sized. It looked OK, but the linen was quite scratchy and the pillows were very flat. The mattress however, wasn’t great for two people to sleep comfortably on – when one person moved, the other was bounced around. A further irritation was the switches for the overhead lights – they couldn’t be reached from the bed. 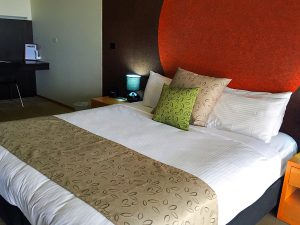 In the room there’s free wi-fi, but it’s quite slow and dropped out for a prolonged period. When we rang reception to enquire why it wasn’t working, we were told to check our own devices. This is another bugbear; essentially there’s no such thing as free wi-fi – the cost of providing it would be factored into the room rate. We were told there wasn’t a problem with the wi-fi (because reception was on the same system, we were told). Ten minutes later, we rang again, to find out that yes, indeed there was a problem and the system was being re-booted. After being told the problem was, effectively, unique to us, we were rather bemused when we had to ring back to find out it was a resort-wide issue.

The rooms themselves were reasonably quiet but it didn’t seem like the resort was hugely busy.

After a stellar lunch, we weren’t inclined to try the bar or restaurant areas and we also went further afield for breakfast the next day, at Trofeo Estate. Overall, for the price (A$163), it was an OK stay, but a few tweaks would have made it much more welcoming and comfortable.