Where to eat in Mildura – Stefano’s

On the banks of the Murray River, Mildura is a major regional town in Victoria that borders both New South Wales and South Australia. It’s a noted ‘food bowl’ – the region is awash in produce – wheat, fruit and wine in particular. So choosing to where to eat in Mildura should have plenty of options although there’s not a huge number of places to enjoy something really special. One of those that Greedy Girl has always wanted to try is Stefano’s.

The restaurant is in the cellars of the Grand Hotel, one of Mildura’s historic buildings. The hotel itself was built during a temperance period for the town and was originally known as a ‘coffee palace’. Chef Stefano De Pieri established it as a food destination when he moved to Mildura in 1991 and turned a basement that was once home to beer kegs into a number of dining spaces.

De Pieri emigrated to Australia from Treviso in northern Italy more than 40 years ago and has always prided himself on showcasing rustic Italian fare, but he hasn’t always overseen the kitchen in his eponymous establishment.

In April 2014, the hobs were handed to former Vue de Monde sous chef Jim McDougall who tried to bring more of a fine dining scene to Mildura. That proved to be short-lived – the local market just wasn’t large enough to support McDougall’s vision. Despite the restaurant taking out the Good Food Guide regional restaurant of the year, De Pieri was back in charge of the kitchen by February 2015.

De Pieri has been a staunch advocate of local produce and maintaining his Italian traditions. He authored a cookbook ‘A Gondola on the Murray’ which also became a TV series. In recent years he’s parlayed his celebrity into a number of food outlets at the Grand Hotel as well as a range of take-home products, including preserves, chutneys, pasta sauces, antipasto items and wine.

We’d tried to eat at Stefano’s flagship restaurant many years earlier but couldn’t get a table – we opted for the cafe fare upstairs and thoroughly enjoyed it. A road trip to a nearby national park for a family celebration recently saw us back in Mildura and immediately we booked a table for two in the cellar.

The restaurant has three areas, the ‘cool room’, the ‘Venetian room’ and the corridor. Tables for two are put in the corridor; it’s certainly a dramatic ambience with stone walls and a dark space enlivened by sconce lighting and table candles.  Stefano’s serves a five-course meal that takes account of dietary requirements but there’s no menu – apart, of course, from the wine list. We’d been sipping prosecco at lunchtime so we opted to stay with bubbles and ordered a bottle of Taittinger.

Shortly thereafter the waitress came back to say the ‘last two’ bottles of Taittinger had already been ordered that evening. Obviously there are plenty of Mildura diners with sublime taste in champagne. She offered us a bottle of Bollinger, which was more expensive on the list, at the same price. It wasn’t really a matter of price; Greedy Girl much prefers Taittinger but, all good.

The bottle was produced and poured – it wasn’t as cold as Greedy Girl would have liked and the glasses were filled too much. Where we were sitting, the air-conditioning in the corridor seemed to come on and go off (Greedy Girl can’t vouch for the experience in other rooms). It meant one either gulped down the champagne or it went warm in the glass.

When the staff came to refill we motioned for them to stop when the glass was half full. Maybe it was ‘country hospitality’ but it was hard to get them to stop.

Having established what we wouldn’t eat (Greedy Girl in the main with her antipathy to beetroot and fresh oysters), the food service began, initially with some homemade sourdough bread and local olive oil. We fell on it ravenously and then the first course was presented – mussels served with a sourdough crostini and a tomato and garlic sauce. 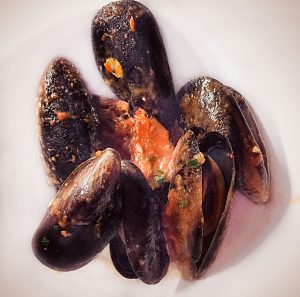 Greedy Girl isn’t a huge fan of mussels. The best she’s ever had were in Venice (not a million miles from De Pieri’s home town) at Da’a Marisa, so she decided to give these a go. They were perfectly edible, quite plump and well cooked. The tomato sauce tasted a little bitter to Greedy Girl but she mopped it up.

Next up was a twice-cooked spinach sformato (like a souffle) with parmesan and a bechamel sauce. This had great flavour but when the plate arrived at the table, the sauce had started to split. Still it was undoubtedly tasty and very filling. 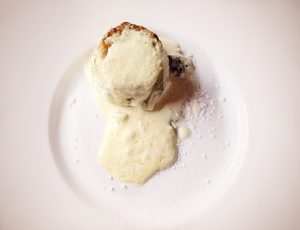 Greedy Girl had finished her bread, so the plate was promptly whisked away. That was a little disappointing – we anticipated there would be things to mop in our future but weren’t asked if we’d like any more bread.

Next up was pasta – pappardelle with caramelised onions and duck livers, topped again with parmesan. Following on from the previous dish, it was quite heavy.

It’s traditional to eat pasta with just a fork and that was the only implement on the table but the livers were very difficult to cut. It meant we were unable to adequately distribute the livers across the pasta. They also looked like they hadn’t been trimmed very well. There was also not enough of the onions in Greedy Girl’s opinion to break through the richness. 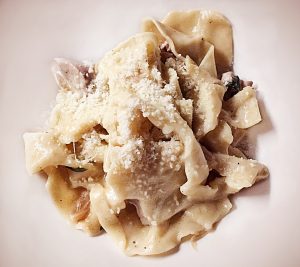 Our final savoury course was osso bucco, served with green beans and soft polenta (pictured at the top of this post). It was an attractive-looking plate but the texture of the meat was quite dry. The beans were crunchy but OK. The polenta? While Greedy Girl has been known to enjoy polenta as a cake, with a nice crust, this soft splodge didn’t do much for her.

We finished off our champagne and shortly thereafter, dessert arrived. It was a fairly bland pannacotta with a wedge of poached quince and a biscotto. The best thing on the plate was the biscotto. Greedy Girl and gluttonous husband didn’t really enjoy the rest of the dish and gluttonous husband had to peel off some skin from his fruit which was inedible. Greedy Girl left most of her plate. 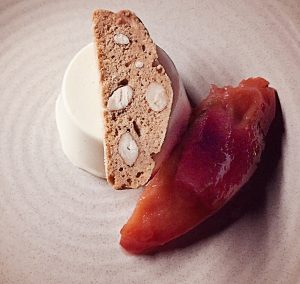 And we were done. We didn’t want to linger – sitting in the corridor wasn’t particularly comfortable with a constant stream of wait staff and other patrons moving past – so we paid the bill and headed into the night.

Greedy Girl had very solid expectations of Stefano’s but she was pretty disappointed with this experience.