Travelling independently in China can be a challenge for those without any local language skills. Starting your visit in Shanghai, arguably the most ‘western’ of mainland Chinese cities, can lull you into a false sense of security.

There, a great many signs are in English (or at least Pinyin, the English alphabet equivalent of the characters), there are lots of expats working in the European-style restaurants and some shops and cafes have locals who possess basic communication skills.

Moving away from Shanghai, even into such renowned cities for tourists including Chengdu (home to the famed panda research base) and Xi’An, where we marvelled at the extraordinary terracotta warriors, English is a lot harder to come by.

And, when you’re looking for somewhere to eat that isn’t in the confines of one of the major hotels, you need to take a serious leap of faith. There are no English menus and even pointing at a picture is an act of optimism; does it look like chicken? Pork?

So after a morning walking around the expansive terracotta warriors museum, about an hour’s drive from the city centre of Xi’An, we were famished. Gluttonous husband suggested we ask our wonderful tour guide Stefanie (who spoke excellent English) to recommend a place for us to eat.

That seemed like a grand idea until the practicalities set in – it was hugely likely that there would be no English wherever she suggested. We ended up trying the restaurant in our hotel, the Crowne Plaza.

This is called ‘Made in Palace’. As westerners, we were greeted outside the restaurant, invited to sit and choose our dishes from an iPad app, in English. The majority of our choices seemed to revolve around meat or vegetables. There was little fish or seafood on offer. Having selected four plates and confirming with the very nice young hostess that she thought that would be enough food, we were then shown into the dining room.

And quite ‘glamorous’ it was, in an opulent Chinese style. Lots of black lacquer cabinets, upholstered chairs and statement overhead lighting made from crystals. We were asked what we’d like to drink. Greedy Girl pointed to ‘Jasmine tea’ on the list offered and also asked for some cold water.

The staff here spoke a little English but, as is the case we’ve found mostly on this tour through China, very few people actually understand English. Greedy Girl should acknowledge that perhaps the Australian accent is not particularly easy for the locals but …

As we waited for our dishes, one glass of Jasmine tea was produced and one glass of iced water. Greedy Girl mimed a request for two of each. A smile and a nod. All good.

The food here was nicely presented. First up were a local take on mini burgers. Essentially this was soft pulled pork in a bun or ‘bao’. We’ve eaten this style of bun many times and usually they’re quite soft. These were much harder and reasonably crunchy, although the filling was quite nice and moist. We ate all the filling, but left much of the bun on the plate. 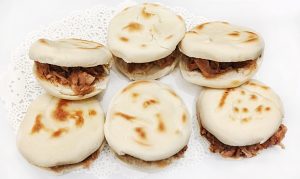 Next, our noodles with pork and vegetables arrived (pictured at the top of this post). We’d already communicated we didn’t want the dish to be too spicy and the chef did us proud.

We’d already been told by Stefanie that because the northern parts of China didn’t have enough water to grow rice, noodles were more of a staple. These noodles were quite broad, almost like a pappardelle and the combination of vegetables (including spinach, bean shoots and spring onions) were all cooked really well. The broth was delicious – deep reddish-brown with a subtle spicy kick.

Our other dishes turned up in quick succession. First were some fried dumplings made from leek and garlic chives. After they’d cooled down slightly they were quite tasty but Greedy Girl much prefers steamed dumplings. 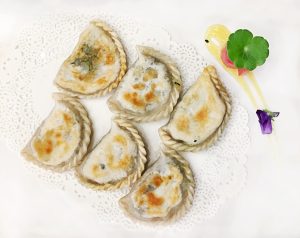 Finally, we had their take on a pork spring roll. The mixture in these crispy little parcels was yummy; while they were the last plate to arrive, we finished them first. 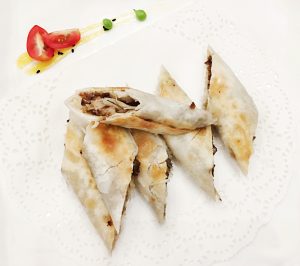 And we were done, quite full and content. We motioned for the bill; gluttonous husband took a look at it and burst out laughing. The most expensive element of our feast was – wait for it – the tea. That worked out to be around A$12 per cup, while the leek dumplings were about A$4 and the other three plates A$10 each.

We’d liked to have been much more adventurous with our food but it’s very hard without a local to help break through the language barrier. We found the same in Chengdu where we went walking through the ancient laneways and tried to avoid anything that looked like a tourist trap.

The moral of the story – befriend a local who can steer you in the right direction.