Where to eat Shanghai – Mr and Mrs Bund

Shanghai is an imposing place. It’s home to almost as many people as the whole of Australia and on a recent spring night it seems most of them are on the city’s pedestrian hotspot, Nanjing Street – a sea of people flowing down to the world famous Bund.

Among them were Greedy Girl and gluttonous husband, out celebrating their 20th anniversary. Lucky we were going with the flow because with that many people around, you don’t want to be pushing against the tide. We were off to Mr and Mrs Bund, a restaurant by noted French chef Paul Pairet. Unlike his over-the-top fine dining establishment Ultraviolet, this is his take on French bistro food.

In 2016, the restaurant was ranked 28 on the list of Asia’s 50 Best Restaurants but in 2017 it dropped out of the rankings. Still, it’s an impressive-looking dining room with statement lighting, blaring tunes, plush seating and a glam vibe.

It’s at Bund 18, home to a number of restaurants and bars and offering a sensational view of the lights over on the Pudong side of Shanghai, including the Oriental Pearl. Generally the views are only available out on the terrace and, since a smoking ban in restaurants has come into effect across China, that space is dominated by the puffers.

Greedy Girl and gluttonous husband were hoping for a somewhat romantic night out. We were shown to a table right next to a family with two very small children. Greedy Girl has nothing against kids in restaurants but we were hoping for a romantic dinner a deux. We asked if another table was available so that we could all eat in peace and were shown a spot near the bar, which was fine for us.

And so our evening unfolded. There are a number of different sent menus plus a bewildering array of a la carte choices. We opted for the menu L’Essentiel. We asked if it was possible to amend any of the dishes on the set menu. The answer there was a firm ‘no’. A Gallic shrug was in order. We went for the menu at RMB888 each (around A$175) and settled in. Greedy Girl perused the iPad wine list and was slightly horrified at how expensive the champagnes were. We settled on a standard Veuve Clicquot at RMB1200 (an eye-watering A$235 for a bottle that could normally cost no more than $80). It was our anniversary – we needed champagne.

Sadly, one of our glasses robbed the champagne of any fizz. We asked for another glass; the request wasn’t entirely welcomed by our waitress, but perhaps our reasoning was lost in translation. The restaurant temperature also fluctuated – at various points the air-conditioning would kick in and we’d feel a little chilly, while at other times it was quite warm. Again, we tried to stop the champagne glass being filled to the brim as we sip slowly and the champagne heats up too much. That also seemed to be a black mark against us. C’est la vie …

We were given an amuse bouche to start – crostini served with a tuna mousse. The flavours were fine, but the crostini was so thin it crumbled when you tried to load the mousse on top so it proved a bit messy to eat.

The set menus are designed for sharing by two people but rather than a tasting menu, they come out as multiple dishes for a starter, main and dessert. Our starters were what they called a terrine of foie gras with a ‘herb salad’, a rocket, Paris mushroom, truffle and parmesan salad with a soy dressing, and half a dozen Gillardeau oysters.

Gluttonous husband helped himself to the oysters which are usually from the Normandy region of France and are described often as the ‘Rolls Royce’ variety. They’re quite large and meaty and were very pleasant but gluttonous husband prefers a smaller, ‘sweeter’ species. While he polished them off he commented: ‘give me a Sydney rock oyster any day’. These were served with a variety of sauces and toppings, but gluttonous husband is a purist – a squeeze of lemon was all he added. 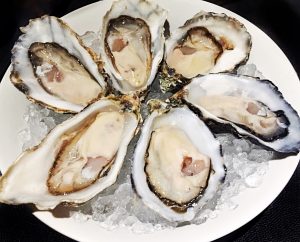 Greedy Girl helped herself to the rocket salad which was very tasty. It had a good combination of flavours and she enjoyed the crunch from the leaves. The salad is mixed at the table. 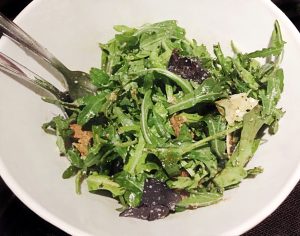 And then there was the foie gras ‘terrine’, essentially a slab of cold foie gras with a few nuts dressing the plate and a ‘herb salad’ which seemed to be just more rocket. But the foie gras was sublime. We tore pieces of bread from a basket and hoed in. The wait staff incurred gluttonous husband’s ire when they tried to remove his plate before he’d finished his foie gras. We got the distinct impression we were being hurried through our meal and champagne to make room for another sitting.

Next up was the main course, which centred around a Wagyu rib-eye and bearnaise sauce with a selection of sides – spinach, mushrooms and mashed potato and another ‘herb salad’. This appeared very quickly after our starters.

Given gluttonous husband usually orders his steak still mooing and Greedy Girl opts for medium rare, we met in the middle, ordering the steak rare. It was very well cooked and seasoned but the vein of fat was a little tricky, especially being able to see it in the low light of the restaurant. Gluttonous husband was reminded of watching British chef Marcus Wareing cooking a steak on Masterchef The Professionals where he removed the fat but put it in the pan with the meat so it could impart flavour. The meat was, however, quite tasty. 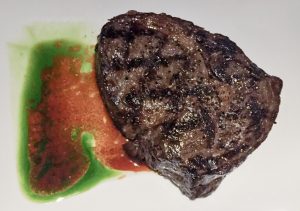 The bearnaise sauce was quite good as was the potato mash and selection of mushrooms. What Greedy Girl didn’t particularly enjoy was the spinach, not really enamoured of the wilted texture. It was dressed with a garlic butter, sesame oil and soy and the combination of flavours there were quite good. Greedy Girl prefers her spinach in its natural state. 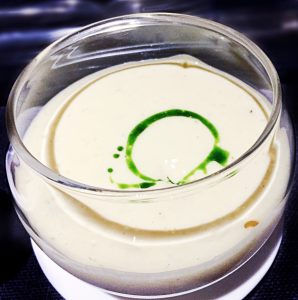 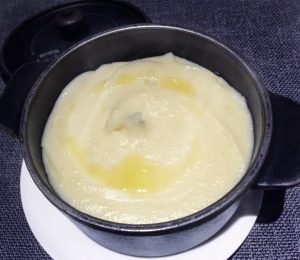 We considered asking for the desserts to be withheld until we’d finished the champagne but decided it was best to just press on. The desserts were there in a flash – the iles flottantes (pictured at the top of this post) and strawberries with chantilly cream.

Gluttonous husband helped himself to the cream as it’s not Greedy Girl’s thing but the strawberries were very good. There was also a strawberry sorbet lurking under the cream which was quite OK. 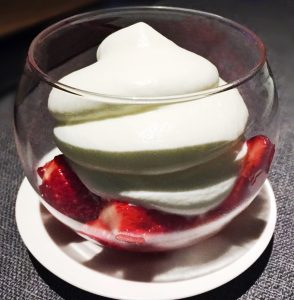 The iles flottantes looked impressive. The soft meringue was topped by a thin slice of toffee and while it sat in a pool of creme anglaise, it also had a very strong caramel filling. Greedy Girl isn’t particularly fond of caramel, so most of this dish was left behind.

And we were done. We settled up and went out into the throng, walking back to our hotel along the pedestrian street, trying to avoid the legions of touts wanting to sell us fake designer bags, drones and loads of other, ahem, stuff.

This is the second time we’ve been to Shanghai and we have to say, it’s been hard to find a western-style meal we’ve actually relished here. The produce at Mr and Mrs Bund was clearly very good but nothing had a real wow factor and we’d been led to believe we’d be getting something a little more creative.

The restaurant clearly plays to a particular clientele. The music blares and, on several occasions during our relatively short tenure, the lights would go out, a particular song would ring out and waiters bearing sparklers would deliver what appeared to be a birthday treat to several tables. The first time it was vaguely entertaining but, as the evening wore on, it just became a bit annoying. The wait staff didn’t look like they were doing it with any great enthusiasm, so it seemed a bit forced.

Perhaps we expected too much from Mr and Mrs Bund; it was, however, an experience that we were happy to draw a line under. On this tour of China we’re developing a fairly strong opinion that local food is the way to go. 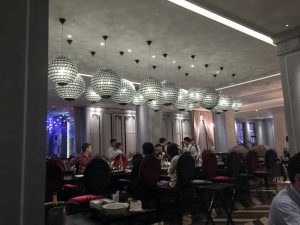 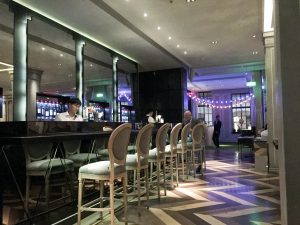