Where to eat Sydney: Rockpool Bar and Grill

One of Sydney’s noted chefs is Neil Perry, who has built a substantial empire based on his Rockpool brand. While the chef (known just as much for his signature pony tail as his culinary exploits) recently sold Rockpool to the Urban Purveyor Group, the style of the iconic Bar and Grill in Sydney’s Hunter Street remains unchanged.

On a recent Sydney visit, Greedy Girl wended her way to the beautiful art deco building after work with foodie friend Madame Lapine and was surprised to find a very quiet spot in the bar.

Admittedly, the bar isn’t the cheapest spot to eat and drink in Sydney but there are things it does incredibly well and we both had a craving for one dish in particular – the minute steak (pictured at the top of this post).

But Greedy Girl is getting ahead of herself. We decided to treat ourselves to a bottle of prosecco, ordered a few dishes to share and settled in. At night, this is a very dark venue. Happily a lamp was brought to the table so we could read the menu and we asked for it to be left (for photography purposes).

It’s atmospheric (even on a quiet night) and a comfortable spot to sit and chat. The main restaurant is next door and while we’ve both eaten there many times, the bar food is more than adequate.

We started with a couple of small plates – beef empanadas, served with a herby sauce and ‘Kinkawooka’ King Prawn cutlets (from Port Lincoln in South Australia) with a lemon wedge and aioli. 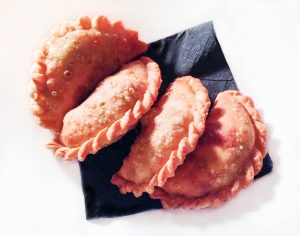 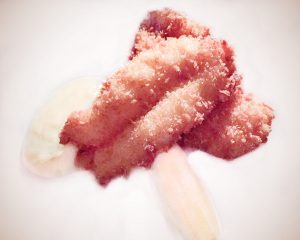 Both dishes were more than edible. The empanadas were particularly enjoyable with crispy pastry, soft filling and a nice herby relish.

The prawn cutlets were also quite pleasant and the mayo and lemon set them off nicely.

We then moved to mains, indicating to the wait staff that we would share. Our mushroom and gruyere burger was presented separately (half each) which was a nice touch. It featured caramelised onions and pine nuts and was a nice foil for the meat. Greedy Girl was more than satisfied with just a half. 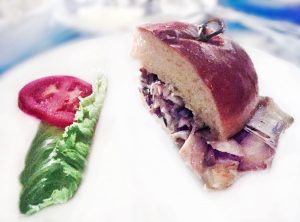 The minute steak was absolutely perfect. The meat was full of flavour, soft in texture and the cooking was spot on, grilled over a wood fire. It’s served simply with a cafe de Paris butter. It was so tender, it barely needed a knife. Perry is noted for his choice of produce and this is as good an example of the best Australian steak you’ll find.

We shared some shoestring fries and a radicchio salad, served with a palm sugar vinaigrette. They were perfectly acceptable sides.

And we were done. Rockpool isn’t a particularly inexpensive place to eat, but this style of food just hits the right notes. For comfort food, it’s hard to beat.