Even when one prefers to try out new and exciting foodie experiences, we’re often creatures of habit. Recently for a quick lunch at work, Greedy Girl and her dear friend Pucci Girl were set to go to a regular haunt when Pucci Girl put forward an alternative.

We headed to the Grand Hyatt Melbourne for the ‘Burn City pop-up’, celebrating all manner of smoked meats. Walking in the main door, we were initially puzzled as to where this pop up might be. It turned out to just be a special menu at the hotel’s main cafe, Collins Kitchen.

The Grand Hyatt has enlisted the services of Burn City Smokers – barbecue enthusiasts Steve Kimonides and Raphael Guthrie, who fell in love with the smoked meats so loved in the southern US. Ethically sourced meats form the basis of their offering, which they’ve rolled out at a number of pop-ups around Melbourne.

Both Greedy Girl and Pucci Girl had expected to see chefs manning a smoker or a barbecue in something like a temporary kiosk set-up. It should be said though, that Collins Kitchen is quite a pleasant spot for a workaday lunch. It was reasonably busy, but not crowded, light and bright and comfortable.

As we were headed to meetings after our catch-up, we decided to forego wine. We opted for a dish each plus some sides and settled in. First to arrive at the table was two loaves of soda bread. This was seriously hot and rather crumbly. We had to ask for side plates to avoid making a complete mess of the table. Still, the bread itself was quite delish and the butter melted into it in a most satisfactory way. 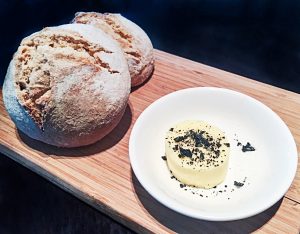 We were both strongly attracted to the smoked brisket burger but, in the quest to try a variety of dishes for blogging purposes, Greedy Girl instead opted for the beef tartare (pictured at the top of this post). This was intriguingly described as ‘bathed in brisket drippings’. Greedy Girl surmises the drippings were turned into the crispy shards you can see in the picture – kinda like beef crackers. They were a welcome texture, tartare being obviously quite soft, but there wasn’t a huge flavour hit. The tartare itself was very pleasant but could have used a bit more spice and seasoning, notwithstanding the flakes of rock salt on the egg yolk.

Pucci Girl relished her smoked brisket burger and graciously offered Greedy Girl a slice. The meat was very good. Generally Greedy Girl isn’t the biggest fan of pulled meats but this was a very good texture and worked brilliantly with the accompaniments, especially the pickles and mustard. 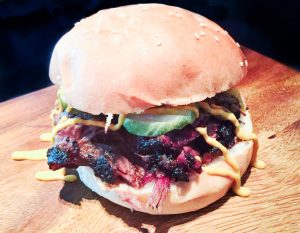 Our two sides were a ‘herby slaw’ and cut chips. Both were OK. The slaw was a nice foil for the richness of the tartare but, again, didn’t pack a load of flavour, while the chips were fine, if not a rave. 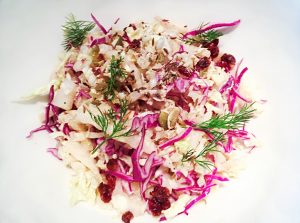 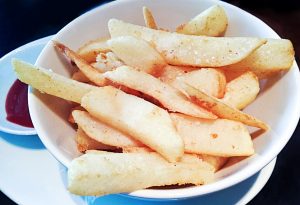 Pucci Girl helped herself to a rather good looking piccolo to finish, accompanied by an excellent biscotto, and we were done. All told, this cost us around A$25 each for lunch, so not outrageously inexpensive but by no means the most expensive burger you’ll get in a five-star hotel. 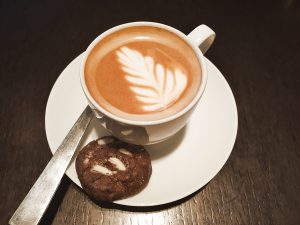 The pop-up will be running throughout winter 2017.