There’s no shortage of Italian food in Melbourne but there’s only a handful of places that constantly create a buzz. One of those is Osteria Ilaria.

Osteria Ilaria is about twice the size of its sister restaurant Tipo 00 next door in a block of Little Bourke Street (between Elizabeth and Queen Streets) that’s chock-full of bars and eateries. Tipo 00 (named after the flour used to make premium pasta) is almost impossible to get a reservation at, given it seats only around 40 diners. Greedy Girl was thrilled to get a table on a recent Saturday night at Osteria Ilaria, which has about 90 seats, to celebrate dear friend Pucci Girl’s birthday.

Despite being quintessentially Italian, the chef/co-owner here is Andreas Papadakis who is in partnership with the restaurant manager Luke Skidmore. Papadakis won Time Out’s Melbourne chef of the year and he was formerly at Melbourne fine dining bastion Vue de Monde. The food is described as ‘modern’ osteria fare and is very light on pasta, so if you’re looking for a fix, best to queue up for Tipo 00 next door.

There’s a decent wine menu with a lot of European options in particular. We settled for a bottle of sparkling chenin blanc, a Bulles de Roche from Saumur in the Loire Valley. Osteria Ilaria isn’t a particularly quiet restaurant but if you’re a group and looking for a slightly less frenetic spot, ask for one of the tables at the back of this long, reasonably narrow building.

And so we settled in. The wait staff said the starters were all designed to share. Greedy Girl, trying desperately to be good to get her, ahem, cholesterol levels down, wanly pleaded to select her own dishes, rather than subject the rest of the table to her dietary restraints. All good.

A range of starters is priced by the piece. Greedy Girl and The Francophile started off with zucchini flowers, served with mizuna (an Asian salad green, served here as a very vivid slick on the plate) and jerusalem artichoke. These were very pleasant; Greedy Girl shouldn’t have eaten something deep fried but she was  just trying to be good, not reaching for sainthood … 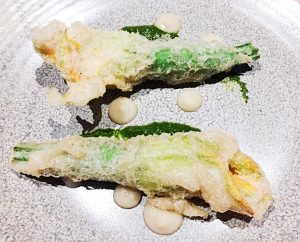 We also took a couple of scallops, served on the half shell with what was termed a cauliflower hollandaise. Cauliflower and scallops are a very, very fine match and the richness of the sauce was quite good. Greedy Girl discerned a couple of springs of lemongrass atop hers and that jarred a bit on her palate and took away from the lusciousness of the seafood. 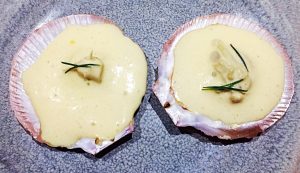 The Runner took an extraordinarily bright dish, cured rainbow trout with blood orange and vermouth. It was very quickly hoovered up and The Runner commented the combination was quite fine. 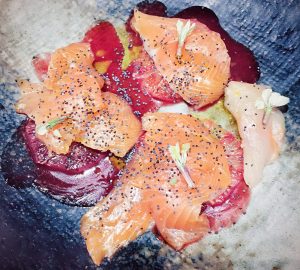 Pucci Girl took the stracciatella, broad beans, tomato and olives. She was a little disappointed with the dish, saying the cheese overwhelmed everything else on the plate. 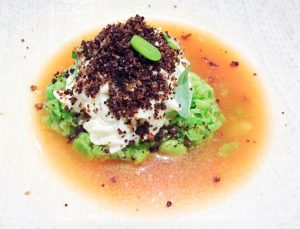 And so to mains. Pucci Girl and the runner both had one of the few pastas on the menu, a gnocchi with peas, pistachio and goats curd. It was a very attractive plate of food and The Runner polished his off in record time. 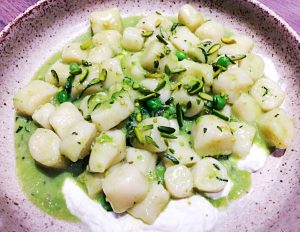 Greedy Girl and The Francophile both took the grilled asparagus (pictured at the top of this post), which was economically described on the menu as being accompanied by macadamia and  balsamic. There’s nothing like getting fruits and vegetables at the height of their season. The asparagus was delectable and the nutty sludge on the plate delicious. Topped with a profusion of greens, it was a very edible dish and every skerrick was mopped up.

And so to dessert. Greedy Girl wasn’t living up to her nickname and she passed. The Runner took the cheese plate, choosing a Stilton and a soft washed rind. 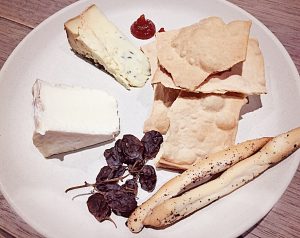 Pucci Girl opted for the vanilla semifreddo with strawberries and almond. 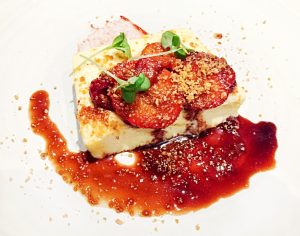 While The Francophile took another attractive dish, a mandarin, cream cheese and oat crumble. 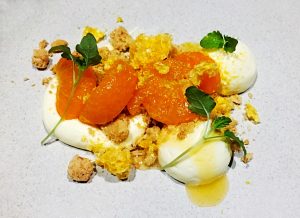 A few herb teas later and we were done.

The standard of cooking here is pretty high and the dishes for the most part were enjoyable but there wasn’t anything to exclaim about in raptures. Still, it’s a good option, particularly for groups, with a decent range of food choices, served promptly by wait staff who were personable without being too “in your face”.

Greedy Girl concedes she may not have been able to experience the cooking at its full depth, given she had to pass on a host of potentially yummy plates. One to watch and revisit in healthier times.