Status with an airline is a wonderful thing. Fly often enough and you get some fairly decent perks – better seating, more access to award bookings and airport lounges.

Sadly, Greedy Girl no longer flies often enough to qualify for the complimentary lounge access she used to enjoy.

Still, at the start of this very long trip, taking in Bangkok, London, Tromso, Oslo, Amsterdam, Paris and Singapore, it was nice to have racked up enough status to earn a one-off into the Qantas Business lounge in Melbourne’s international terminal.

And not much has changed. The decor is still pretty much as she remembers it but happily there were few Qantas flights departing at this point in the day (lunchtime) so the lounge was fairly quiet. 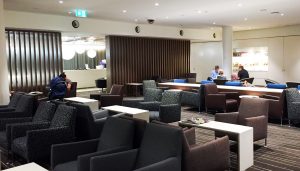 Only a handful of patrons

We settled in. Gluttonous husband headed for the bar and poured himself a welcoming Scotch, while Greedy Girl perused what was on offer. Despite there being only a handful of people around, she was struck by the number of dirty tables. Indeed, the lounge was not what you’d call pristine, which was a bit disappointing.

Part of the booze offering

What’s on offer here has changed. There’s a long bench with high seating in the lounge, set up for meals. In the past, we’d enjoyed some nice offerings there but were told this is now only available in the evening. Also, as we were sitting and relaxing, staff would bring around treats – hot chips, ice-creams. There was no evidence of that either. 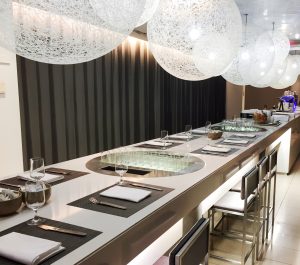 The long dining bench, sadly not available at lunchtime anymore

And so we helped ourselves to a snack. Initially there were slim pickings. We opted for pre-prepared focaccia (or sandwiches) which you could toast yourself in a sandwich press. They were perfectly edible. 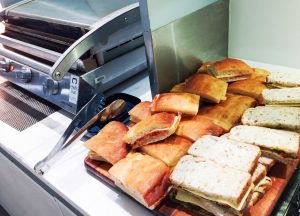 Focaccia or sandwiches that you toast yourself

Then, some dishes were brought out. On the menu was chicken cacciatore and a fried rice with vegetables. Greedy Girl took a small bowl of the latter and found, to her consternation, it was virtually cold. Odd that this would be brought from the kitchen cold and warmed through on a hot plate? She went back for another focaccia. Gluttonous husband tried the chicken and commented it was hot – at least that’s a tick. 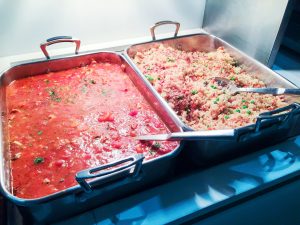 There was also a decent salad selection, although we didn’t partake. 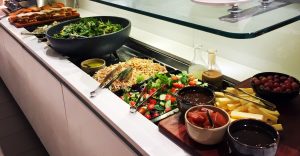 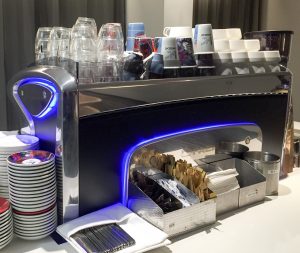 To her credit, she came over and prepared two decent cups. To accompany this, we tried a slice of chocolate cake. It was quite OK – certainly not as dry as it looked. 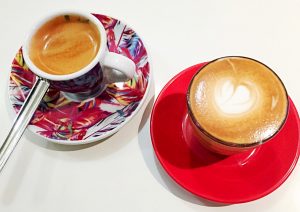 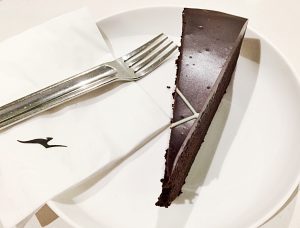 Happily our gate was close to the lounge and we headed there the moment the flight was called.

Lounge access is a privilege (unless it’s something you’re paying for). We were happy for it to be relatively quiet and enjoyed the decent wi-fi (something Melbourne airport is not noted for), but were underwhelmed by the reduction in service.

First lounges have a lot more going for them – spa treatments, champagne tastings, table service, a menu and generally decent food. Qualifying to use them through high status or flying first class is an expensive exercise but a nice perk if you’re not shelling out yourself.

Would we turn ourselves inside out to visit the business lounge in Melbourne again? No. We have access to a number of other lounges on this tour and we’ll report back on how this one compares.

A postscript: we took one of Australia’s low-cost carriers from Melbourne to Bangkok – Jetstar. I’ve written before on how decent the food was and this trip was again remarkable. A peppery pork dish with crunchy green beans and rice. It’s a bit sad when the food on a budget airline is better than the business lounge of such an iconic brand as Qantas.