Seeing the northern lights is undoubtedly high on a lot of people’s bucket lists. There’s something otherworldly about those snaking, dancing colours in the sky that’s, well, magical.

Chasing the northern lights, or aurora borealis, can be both elusive or ridiculously straightforward – it just depends on the particular confluence of factors that result in the lights making their appearance.

But what it does need is darkness and a clear sky. We headed to the Arctic city of Tromso in Norway to base our quest to see the northern lights. The season runs from late September to April but peak period is in the depths of the northern winter.

And therein lies a big problem. In winter, in the Arctic, it’s cold and it snows – a lot. Just making our way out of Tromso airport without slip sliding away on icy paths was tricky enough. Over the four days we spent there in early December, it started snowing early the first morning and pretty much didn’t stop.

So the game is fairly simple – monitor the measure of northern lights activity known as the ‘KP’ index (which runs from zero to nine) and look for clear skies.

We essentially had three chances to see the lights. The snow and heavy skies over the city of Tromso meant our first night was a wash out, although some fellow passengers on our Norwegian flight, direct to Tromso from London Gatwick said they saw flashes of the lights before we dived under the cloud on final approach. Being an airline pilot must be absolutely wonderful at times …

Our first night we headed out with a tour company that styled themselves ‘aurora chasers’. It didn’t start well. Construction around our hotel meant they couldn’t come to pick us up and told us to meet them outside a local convenience store at the appointed hour. Fifteen freezing minutes ticked by before, in desperation, we called them – not the cheapest thing to do with an Australian mobile phone. Apparently other pick ups were ‘late’ so, we just had to wait and they didn’t think it necessary to get in touch with us. Great customer service, not.

It was explained we’d be heading for the northernmost spot on the local islands that make up the greater Tromso area where the guides believed was the best chance of clear skies. So, off we went. We made a short stop earlier and got into thermal suits. The booking process clearly asked what size should be provided, so it was a bit puzzling that the guide didn’t have the right sizes for the assembled group.

And so we drove, stopping now and then, but there was not even a glimmer in the sky. It was explained to us that the KP rating was very low – 0.3 – so minimal activity. A fire was built in the snow, hot dogs were grilled on a portable, self-contained barbecue and we sat in the snow with a smoking, sputtering fire and generally felt extremely deflated.

The guide offered toboggans to go sliding down the nearest slope. Thanks, but no thanks. As time ticked towards midnight, we gave up and returned to the city.

The following night, we booked a tour advertised as ‘dog sledding under the northern lights’. You can read the post about that experience here. No auroras in a snowstorm but our sled driver told us the KP rating for the following night, our last in Tromso, was around 5-6. When we got back to the city, we booked with a different company from our first aurora chase.

This was Arctic Explorers. We booked the Monday morning for a tour that night and, via email, worked out where to be collected – a hotel five minutes’ walk from ours, all good.

At the appointed time, our driver/guide Max turned up to collect us. Max is from upstate New York and is a bit of an adventurer, having climbed a few of the world’s great mountains, including Everest. Max took us (a group of four, plus a local girl training to be a northern lights guide) to the company’s warehouse to change into thermal suits and snow boots. We took our own jackets and boots in the car to change later.

Max told us some people don’t want to wear the supplied suits. Frankly, having experienced the cold on this tour, that’s absolutely gobsmacking. Be warm people – wear the suits!

This small group piled into a small van, but depending on numbers, the tour can be a larger minibus. There are other tours, with lots of people, in typical tour buses. That’s not something we considered.

And off we went. With the snow tumbling down we didn’t have the most optimistic outlook but Max explained we were in for a long drive. Given the topography he said the best chance of clear skies was to be found over the border in Finland.

Here’s the route, as shown on Google maps. It doesn’t look particularly far but factor in quite windy roads and lots of snow and it was a challenging drive. 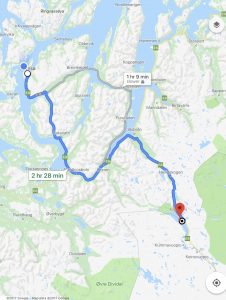 Max chatted throughout without sounding like he was reciting a prepared spiel. He knew the spot for us to stop halfway for a bathroom break and he was always on the lookout for an aurora, once we hit clear sky.

We stopped three times and witnessed auroras, each stronger than the last. The best spot – as Max predicted – was just over the border in Finland, near a town called Kilpisjarvi.

At the second stop, we waded through knee-deep powder and it was seriously cold. Tip – if you don’t have a balaclava, wrap a scarf around the lower part of your face to keep warm. The tour organisers also recommend mittens rather than gloves as keeping your fingers together also helps the warmth factor. 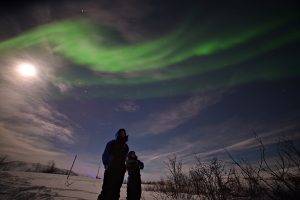 Max was all set to build us a campfire at the second stop but the sky started to cloud over and we headed on to Finland. It was a masterful move and we were in awe watching the lights swirl and dance. In the main they were green, as you can see from the photos here, but there were occasional glimpses of other colours – which are quite rare. The dominant aurora colour is green. 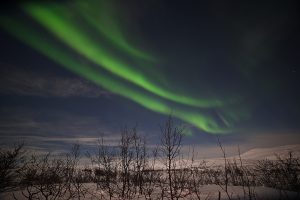 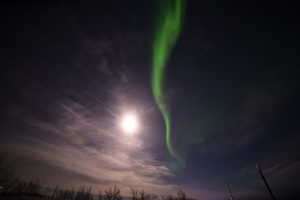 By the light of the moon …

Just a note re: photography. If you don’t carry your own SLR, forget about trying to use your iPhone when the temperatures are this low. The phone doesn’t like the cold. The pictures here were graciously supplied by Max. The full moon does compete with the lights, making them slightly less saturated in colour but they’re still an amazing sight.

Compared to our previous tour agency, Arctic Explorers was incredibly organised, smart and focused. They’re a hearty recommendation if you’re heading to Tromso to try to see the northern lights. 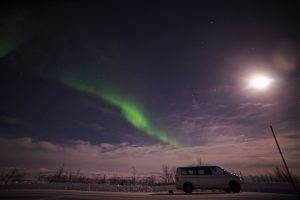 Our little van, dwarfed by the lights

What to wear in Tromso

Tromso has relatively mild weather in the winter, but temperatures while we were there in early December hovered around zero degrees celsius for the most part. There are a few essentials to pack if you’re heading for the Arctic.

Thermals – we just bought the Heattech gear from Uniqlo. The thermal vest and leggings were essential under any other clothing to remain warm.

Snug, water resistant boots – make sure they have a sole that will help you crunch through ice and snow. Walking paths are not always cleared and the streets in the city are just heavily packed snow and can be very slippery to cross.

Fleece – we had fleece-lined hoodies (again from Uniqlo) which gave us an extra layer of warmth. Absolute lifesavers!

Down jackets – everyone in Tromso seems to wear them and you can understand why. Make sure you get one with a hood to help keep the snow off your head.

Beanies, wool socks (two pairs at a time are a good look!), gloves (and/or mittens).