At 69 degrees north, exploring the Norwegian city of Tromso puts you firmly inside the arctic circle. It’s an extraordinary landscape, surrounded by snow-topped mountains and fjords.

Everywhere you go in this amazing world, one place is inevitably compared to another. We’d been told Tromso is regarded as the “Paris of Scandinavia”. Hmmm. I’m not sure I could draw too many parallels there.

But Tromso is a pretty town and seems to do a roaring trade in tourists. A great many of them seem to be Norwegian too. It seems to be a big corporate conference town. If you’re not Norwegian don’t fear any language barrier – everyone speaks English with humbling ease.

But of course, one of the major attractions of travelling to Tromso is the Northern Lights. We were incredibly lucky to experience those (you can read that blog here) but to last a few days one needs more creature comforts  than constantly being knee-deep in slow with eyes focused on the heavens. 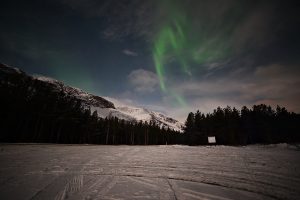 Let’s start with getting there. By far the quickest and easiest is by air. There are a number of flights from various Norwegian cities every day through SAS, low-cost carrier Norwegian and Wideroe. Most of the Wideroe fleet appears to be propeller planes, so if comfort is your thing, perhaps opt for the jets. It’s also possible to travel by bus, car or boat but all of these take a fair amount of time.

If you’re travelling in winter, getting connecting flights can be fraught with peril. While Norwegian airports are very adept at managing snow, we saw first hand that it doesn’t take much to be delayed. We found a non-stop flight from London Gatwick to Tromso with Norwegian which takes, on average three and a half hours. Tip: book a window seat because you might just get a glimpse of the Northern Lights on approach to Tromso airport while you’re still above the clouds.

Norway isn’t a particularly inexpensive place to visit. We took the airport bus to and from the city. You can buy tickets for it from a vending machine in the arrivals hall – either one way or return. Just be aware the bus doesn’t necessarily keep to schedule, so you might have a bit of a wait. It’s not like you have many options though.

Unlike many other places we’ve visited, where taxi drivers know when the planes land, there was a dearth of cabs available. So you either queue for a taxi or wait for the bus – or hire a car, which isn’t for the faint-hearted or those who aren’t used to driving in snow. The bus has a number of stops in the town close to most of the major hotels.

And so, if your main reason for visiting Tromso is to see the Northern Lights, the peak season nominally runs from November to February, although there have been reports of lights from September to April. Seeing the Northern Lights requires a number of factors – solar activity to provide the by-play with earth’s magnetism, a dark sky and an absence of cloud. There’s only one thing you can be certain of in Tromso in the winter and that’s a dark sky.

In the winter, it’s pretty much dark all the time, apart from some watery sunlight (if you’re lucky) between 11am and 2pm. The picture of the harbour in Tromso at the top of this post is a bit misleading. The camera makes the light appear much stronger than it actually was. This was the view from our hotel room at 9am. 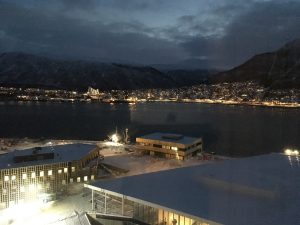 If you’re travelling from far away be warned – this is possibly not a great place to recover from jet lag because there’s no guarantee of sunlight to help reset your body clock.

Of course, it’s the reverse in summer – it barely gets dark, so there’s no possibility of seeing the lights but you’ll need to ensure you stay somewhere with good black out blinds to be able to get to sleep – or put your eye mask from the plane to good use.

But, back to winter. While the vistas are beautiful, the permagloom weighed heavily on me. We talked to a lot of expats about not seeing the sun effectively for six months and they readily admitted it was hard to handle.

The weather in town can be – for the arctic circle – relatively mild, hovering around zero degrees celsius. Proximity to the water stops the temperatures dropping too low but if you’re not used to the northern winter, you’ll still need some good thermals to keep you toasty and warm.

It’s not easy to walk around Tromso in the winter. There’s a lot of frozen snow and it can very slippery. The locals have the technique to get around by effectively skating down the footpaths but it’s a challenge for visitors. Make sure you take water-resistant boots that have a decent tread on the sole to crunch through the ice. The city itself is easy to navigate and there are plenty of restaurants (more on that later) and shops, especially to buy gear for winter pursuits.

We stayed on the waterfront at the Clarion The Edge (the brand has more than one hotel in Tromso). This is a modern, groovy looking hotel (opening in 2014), with the more expensive rooms offering extraordinary views over the mountains and water. For Norway, it wasn’t outrageously costly. We had a deluxe double room (featuring a King-sized bed) and requested a high floor with a water view. Rooms on the other side of the building are less atmospheric. 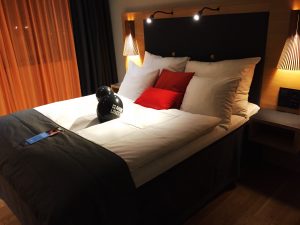 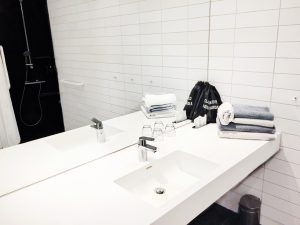 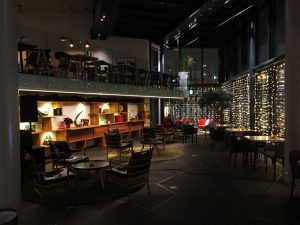 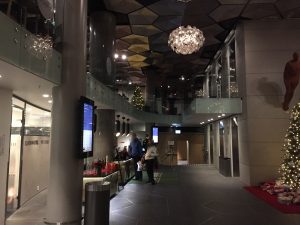 Breakfast was included in the room rate and it’s a substantial spread. Highlights were the things you’d expect in Scandinavia – smoked salmon, very good breads and amazing butter. The breakfast is served in the hotel’s only restaurant, which is an outpost of Swedish/US chef Marcus Samuelsson. We’ve been to his Harlem eatery Red Rooster and the same style is in evidence here, although the menu didn’t appeal to us.

What did appeal to us was the bar, which made an exceptionally good Cosmopolitan. If you manage to snag the little table for two next to the gas fire in the lobby, it’s a pleasant spot to sit and sip. Note that drinking any form of booze in Norway isn’t cheap, but … c’est la vie. 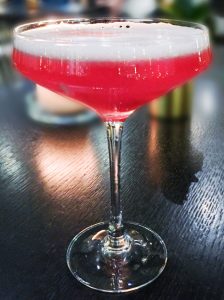 A rather fine Cosmopolitan

The rooms were perfectly comfortable and functional, without being a ‘wow’ while the bathroom was quite basic with a walk-in shower. One good aspect was a separate nook to hang coats wet from the snow.

Now the downside – the ‘free wifi’ broke down the morning after we arrived and our enquiries to the front desk were met with claims that it was a problem with our devices (all four of them – go figure!). Eventually they agreed there was a problem and it would be fixed ‘momentarily’. It wasn’t. After much back and forth we were reluctantly given access to the hotel’s separate wi-fi network but that only worked in the lobby.

As ‘compensation’ for the inconvenience, a manager (who we had to get on the phone, apparently none of the staff on duty were empowered to do anything for us), offered access to a lunch buffet in the restaurant. By the time we got up there to check it out, it had pretty much been picked clean and didn’t look appetising in the slightest.

Be aware if you’re in Tromso on a Sunday that most places to eat and drink are closed. There were no facilities open in our hotel after breakfast to be able to get any lunch. We were told most Norwegians didn’t want to work on Sundays, so if you’re a tourist, make sure you have a plan B.

We found three reasonable places to eat in Tromso that didn’t cost an arm and a leg. The best by far (and open for lunch on a Sunday) was the Art Cafe (see the links below for more details). This offers a range of standard dishes plus a local lamb and potato stew, which was incredibly hearty and satisfying on a snowy day. The restaurant is in a cosy basement and it’s pretty small. 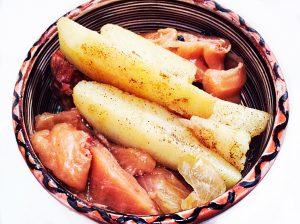 We bumped into some young guys in the elevator at our hotel who recommended the best local place for fish and chips. This was Kaia which, in Norwegian, simply means ‘quay’. It’s basically a pub featuring unpretentious meals focusing on local produce, namely, cod. 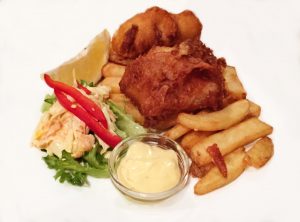 Another night, we decided we needed a burger. The recommendation was for the Huken pub. This is again a very atmospheric little place, just a bar, with a small menu. The interior is very dark at night, hence the picture below is a bit flat, but the burger went down a treat. This was the ‘full overhaling’ burger (not sure what that actually means) featuring Huken’s own special dressing, cheese, salad, bacon and pan fried potatoes.

There’s also a great selection of beer available. While it might be hard to find somewhere to eat on a Sunday, it’s not difficult to find a drink in Tromso with a host of bars abounding. 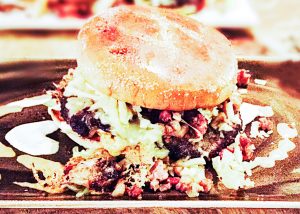 The final part of the equation, but possibly the most important for us, is coffee. Hands down the best coffee place in Tromso is Riso Mat & Kaffebar (mat is the Norwegian word for food). It’s a cosy spot, with excellent coffee, prepared by hipster Norwegians who take things very seriously. The only fun we discerned was in the latte art, but the coffee itself is very very good. 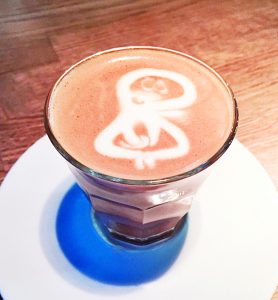 There are various touristy things to do in Tromso itself, including a cable car up the mountains, whale watching and marvelling at the city’s famed Arctic Cathedral. It’s harder to get around in winter, but not impossible, if these are on your list to experience. Certainly there are more than enough tour companies. There’s a link to the one we used for the Northern Lights experience earlier in this blog, and we also posted about another amazing treat – husky sledding. You can read that one here.

Tromso is a great experience but have a plan to do what you want to do and use your time wisely. Unless you’re committed to exploring outdoors in the snow and ice it’s a bit of a shock to the system. There’s probably not enough in the town itself to warrant more than four days. That will also give you a few opportunities to go searching the lights, as they don’t necessarily happen every night.