For a recent birthday get together, five friends sat around the table recalling the last time we were all together at Ezard.

In the basement of the boutique Adelphi Hotel, in Melbourne’s Flinders Lane, we were accompanied during our last sojourn by a pram – containing the Francophile and the Runner’s first baby. Given she’s now nearly 14, it made us reflect how Ezard is staying the distance in Melbourne fine dining.

With Sydney taking the crown as the fine dining epicentre of Australia for many years, focus is shifting back to Melbourne. One of Sydney’s noted fine dining establishments, Sepia, is soon to up stumps from the harbour city and re-open in Melbourne.

But Melbourne, and its surrounds, are world renowned for hosting some of Australia’s best gastronomic experiences. Chef/owner Teage Ezard founded the restaurant in 1999 – almost at the start of Flinders Lane’s rise as a foodie hotspot.

Ezard’s food has always had strong Asian influences and, as we perused the menu, that is still evident. There are three menus on offer – an eight course degustation, a vegetarian tasting menu and the three-course prix fixe. Looking after the kitchen at the moment as head chef is Jarrod Di Blasi, awarded the 2017 young chef of the year by newspaper The Age Good Food Guide.

Given we had a 5.30pm start (yes, folks we’ve succumbed to the early bird special), there would have been plenty of time to eat eight courses but we all opted for the three courses at A$110 per head, washed down with a bottle of Ca’ Del Bosco Cuvee Prestige Franciacorta. This is a delightful Italian sparkling, a blend of chardonnary, pinot nero and pinot bianco grapes and a beautifully crisp wine.

Along with the three courses, chosen from a menu with a fair number of options, there were three complimentary additions. The first of those quickly arrived – a slick of avocado topped by fermented cucumber and salmon roe. It was OK, if not a rave. 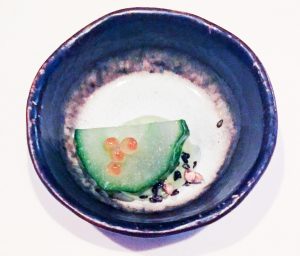 We moved to starters. Both the Runner and Francophile took steamed scallop dumplings with white fungi and basil, and a golden broth poured over the top. The Francophile commented these were heavier than she expected but quite tasty. 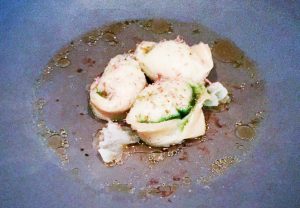 Pucci Girl took a heritage tomato salad. She was delighted by the addition of little raspberries and it made a bright and festive plate. There was also pickled cucumber, white sesame and shiso, plus quark (a type of soured milk curd) and hijiki (an Asian sea vegetable). 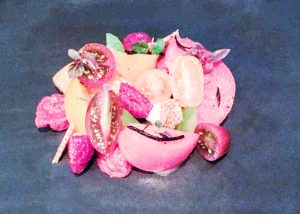 Gluttonous husband opted for cured swordfish with whipped sheep’s yoghurt, preserved seaweed, pickled ginger and puffed jasmine rice. He was thrilled with the freshness of the swordfish and loved how it went with the creaminess of the yoghurt and the texture from the puffed rice. He commented he would be happy to get the dish anywhere in the world. High prize from the world traveller. 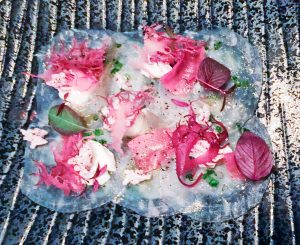 Greedy Girl took risoni ‘risotto’ with various mushrooms, broccolini and creme fraiche. The mushrooms were picked golden enoki, plus what the chef termed a ‘mushroom floss’. 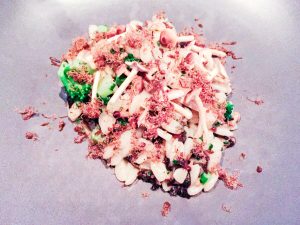 The dish had great texture and the tang from the creme fraiche was very pleasant, but it was probably a bit too heavy. Greedy Girl was happy to share it with gluttonous husband.

It was time for mains. The Runner took Wagyu beef, which was available for a supplement to the standard menu. Gluttonous husband was also keen to have the beef, but requested (as is his wont) for it to be served blue. The wait staff told him the beef was cooked sous vide, so it could be served rare, but not blue. Gluttonous husband changed his order.

However, the beef in the dish was very rare. The Runner relished the dish of ‘eight score’ Sher Wagyu, served with smoked potato croquettes, mushrooms, red wine garlic jam, ox tongue and a pepper jus. 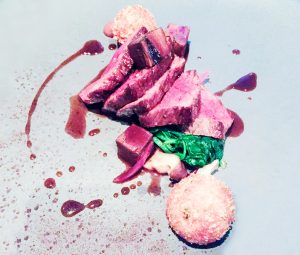 Both the Francophile and gluttonous husband opted for barramundi, from Humpty Doo in the Northern Territory. It was served with smoked tofu, pickled daikon and a shungiku veloute. This is also known as chrysanthemum greens, eaten as a leaf vegetable in a variety of Asian cuisines.

Gluttonous husband commented the fish was cooked perfectly, including delicious crispy skin. He was quite happy with the dish, although he preferred to eat the sauce with the roasted potatoes we ordered on the side. 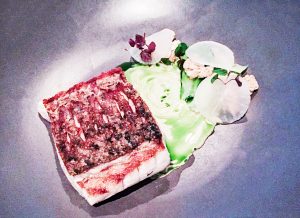 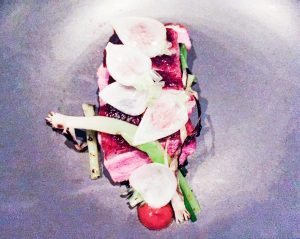 The duck was very rare but beautifully soft and tasty. All the other elements were delicious, except for the roasted chilli which was very very strong and spicy. Greedy Girl scraped most of it off, as did gluttonous husband when she shared the dish with him.

We took two sides – creme royale potatoes with miso and wasabi butter, and steamed green beans with persian fetta and toasted almonds. The potatoes were cooked nicely but Greedy Girl didn’t get any wasabi flavour, while the beans were also a nice foil. 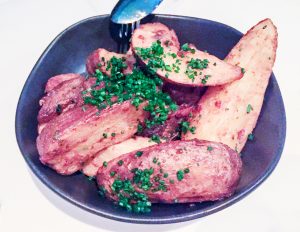 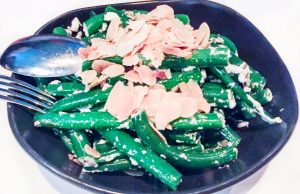 It was time for dessert, but first was the palate cleanser – a passionfruit ice-cream with a smear of soft Italian meringue. It wasn’t as strong with passionfruit as Greedy Girl expected but a pleasant enough pre-dessert. 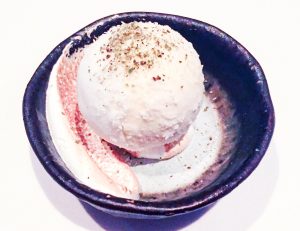 The Francophile and Greedy Girl both had the dessert featured at the top of this post, a glazed lemon tart with blackberries, almond crumble and fig leaf ice-cream. It was a very enjoyable dessert – especially the crunch from the crumble.

Pucci Girl took the coconut parfait with pineapple ice, salted chocolate cookie and green Sichuan caramel. She enjoyed the dish but said the chocolate was too dominant. 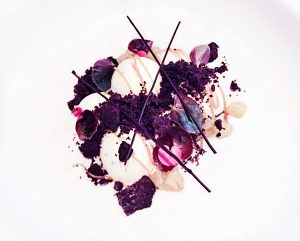 The Runner took the fromage frais cheesecake with grilled peach, ruby peach sorbet and spiced biscuit. It was a very elegant dessert and a clever contrast in the treatment of the two peach elements. 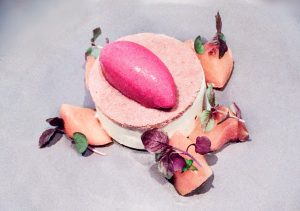 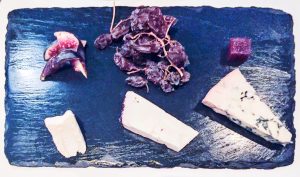 It’s always a challenge serving cheese in an Australian restaurant in summer. Obviously they’re kept refrigerated before service but these were still a bit too cold for the flavour to really shine through.

And we were done – or so we thought. To accompany some coffee and tea, we were given the third complimentary dish, a selection of petits fours. Greedy Girl’s favourite is the second from right – a very satisfying peanut and chocolate slice. 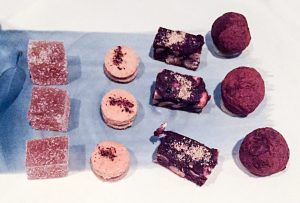 This is the third time we’ve dined at Ezard – admittedly over a very long period. The dining room is dark and atmospheric (as you’d expect in a basement) and it’s a pleasant enough ambience. Service is prompt and fairly attentive but a little aloof. The staff were fully prepared to answer any queries about the food but it wasn’t easy to engage them. The food was good, without any great ‘OMG’ moments but it is definitely staying the distance in Melbourne fine dining.