It also seems to be dominated by women. Greedy Girl couldn’t be happier that, of the four cafes we visited on this trip, all the baristas were female.

Taipei is a huge city, so we only had time for a smattering of what was on offer but here are four excellent spots, in a variety of areas, to get your coffee fix.

Of course, this is the way we like to drink coffee – rich, robust and with relatively little milk (and certainly no syrups or other additives). In Taipei you can make a reservation for Starbucks (yes, you read that correctly) which is on the 35th floor of the iconic 101 building. Apparently it’s used as an alternative to shelling out the $$$ to visit the tower’s observation deck on the 89th floor, but requires an advance booking.

Greedy Girl loves a nice view, but not that much. Ultimately, she much prefers to look at what’s in her cup or glass!

We’d been told before heading to Taipei that English is pretty limited among the locals. Luckily for us, that proved not to be the case and we were also banking on the international language of coffee to help us through.

That served us well – up to a point. Unlike Hong Kong where pretty much every coffee place we went to had heard of a macchiato, that was largely a foreign concept here.

Founded by a local who studied in Melbourne, this was a real find and the only cafe we tracked down that was out of downtown Taipei. Apart from the name, the logo (see the picture at the top of this post) was further evidence of the Aussie connection.

Wandering in not long after 10 am, we were immediately asked if we had a reservation. Er, no …

It soon became apparent why having a booking was a good thing – the place was jam packed. We perched on stools just next to the coffee machine and the very friendly barista volunteered the information about the founder. She was flat chat making a variety of excellent coffees and hot chocolate. Our coffee was beautifully rounded and full of oomph.

Made from the house blend, a bean grown at high altitude of mainly South American origin, it was slightly nutty with a hint of chocolate at the finish. Delish. Absolutely the best coffee we’ve had on this trip. Requesting a piccolo and a double espresso, we didn’t have to explain anything further. 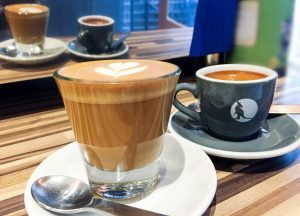 The Lobby of Simple Kaffa

Apparently the founder of this cafe, Berg Wu, won the World Barista Championship in 2016. This is way off the beaten track, in a very trendy neighbourhood though, and unless you’re staying in the area there’s probably zero chance you’d just stroll past and check it out.

The cafe is in a basement courtyard, accessed by stairs from the road and surrounded by boutiques as well as an entrance to the adjacent Hotel V. It’s also noted for its desserts, particularly those featuring matcha, but we didn’t partake.

The language barrier was trickiest here. We resorted to ordering double espressos and asked for hot milk on the side. There was a bit of brow furrowing. Eventually they explained the hot milk would be an extra NT$20 (about A$1). Not a problem. What arrived (one at a time) was effectively a macchiato. The flavour of the coffee was quite pleasant and robust but there wasn’t any of the finesse we saw at other cafes. 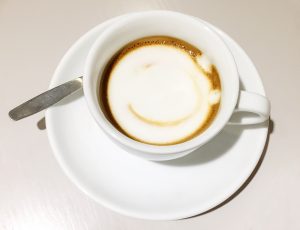 This was our first stop in Taipei and, like Simple Kaffa, a recommendation from our favourite local haunt in Melbourne, Clement. Fika is, apparently, a Swedish word for a coffee break and this cafe oozes Nordic cool with understated decor in light tones. Most importantly, however, it’s a haven for a very good cup of coffee.

The barista spoke a bit of English here, but it wasn’t a problem to get exactly what we wanted – a very nutty piccolo and a double espresso. The only qualm was getting them both at the same time. That seems to be a bit of a feature here – coffees ordered together aren’t necessarily presented together. Ne’er mind. It’s a small quibble if you’re not in any great hurry (and we weren’t).

This is the brainchild of a local roaster/blogger James Chen who is a winner of the Nordic barista championships in 2013 – the same year he established the cafe. 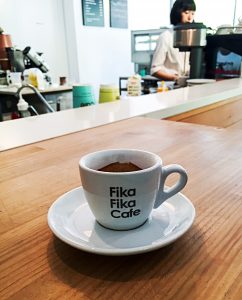 We’d been told about Fujin Street by one of the waitstaff at Raw who described it as a cool neighbourhood full of fun places to eat, drink coffee and shop.

Fujin Street is a short walk from Songshan Airport – Taipei’s second international airport, which is very close to the city’s downtown area. It’s leafy and reasonably quiet but not a shopping strip in any sense that western visitors would recognise.

Still, it was easy to find Fujin Tree and we survived the 10 minute schlep in the brutal Taipei heat. Note to self: if you buy public transport passes make sure they work on the bus as well as the Metro and/or ensure you have your intended address in characters so you can get a taxi if need be.

Nonetheless, we settled into a table down the back and lapped up the air-conditioning. This was the only cafe we also ate at and enjoyed a lunchtime pasta ‘set’ comprising of a delicious ‘east-meets-west’ spaghetti with pork shoulder, spring onions and fresh cherry tomatoes, accompanied by a bowl of potato, mushroom and leek soup (our choice there was we could have had tea instead). Gluttonous husband also found his first Taiwanese IPA, so he was a very happy camper.

The team here has very limited English. There is an English menu but there is no macchiato or piccolo listed, so getting the type of coffee we wanted was a bit tricky. Still, we managed to order two double espressos with some hot milk on the side (and, unlike Simple Kaffa, there was no extra charge for the milk).

The coffee was round and smooth and we had absolutely no complaints. Certainly a very viable option if you’re in the area. 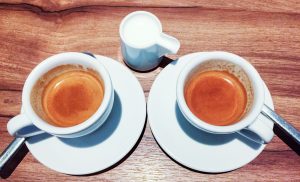 So, if you’re into Australian/Italian-style coffee, here are four ways to find your fix in Taipei. Just a cautionary tale – if you’re travelling on a budget, perhaps you need to rein in your need for caffeine. Prices for this sort of coffee aren’t particularly cheap – in the A$6-7 range per cup.

But it’s a great way of getting out of the city and into some less well travelled areas. Enjoy!