We’d been fans of expatriate British chef Robin Wickens for a long time but had lost track of him when his excellent restaurant closed at the top end of Brunswick Street, just on Melbourne’s city fringes. When we heard he was heading up Wickens at the Royal Mail, we made a mental note to get a booking.

Wickens at the Royal Mail is destination fine dining. The Royal Mail Hotel dominates the town of Dunkeld in Victoria’s western district, about a three-hour drive from Melbourne. It’s a spectacular landscape, on the southern side of the Grampians, and a lot of the accommodation here offers excellent views of the towering hills.

The restaurant here has been on the culinary map for a long time. It was previously helmed by Dan Hunter, who moved on to put another sleepy country town on the foodie radar with Brae. At that point, the fine dining room was in the main room of the hotel, next to the roadway. Now, Wickens is housed in a building that had previously been unused, down a short boardwalk from the main building.

It’s an elegant-looking spot. The door slides open to reveal a small waiting area where we’re invited to sit and have a pre-dinner drink. Given we’d already done that in the wine bar up at the main building, we wanted to go straight through to our table. That wasn’t possible, we were told; we were 10 minutes early for our building and the kitchen wasn’t ready for us.

Okey dokey. The little ante-room was exceptionally cold and the sliding door admitted a gust of frigid air each time it opened, making it a rather unwelcoming place to sit. Having dined all over the world, we understand bookings need to be staggered to give the kitchen time to prepare the feast for all patrons but we weren’t fussed about eating ahead of time – we just wanted a warmer place to sit.

A few minutes later, the sommelier, who had taken us for a tour of the restaurant’s extraordinary wine cellar a little earlier that day, took us through to our table.

It’s a long, dark room with a large kitchen at the far end, separated from the diners by floor-to-ceiling glass. In the summer, the views out to the garden and beyond would be delightful, but in the dark of winter we had a glimpse of a majestic tree out the window but not much more. We had hoped for slightly warmer climes in the restaurant proper too but have to say it was very cold – especially our table which was closest to the windows.

Wickens at the Royal Mail offers two different tasting menus of five or eight courses. We were there as part of a Luxury Escapes package deal, with the five-course menu included and we opted not to upgrade to eight – we’d already been told the little additions to the main menu would be more than enough. 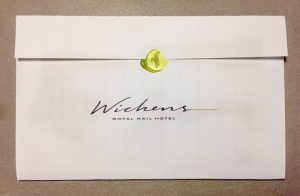 And so, having negotiated our way through the dietary restrictions (no beetroot or fresh oysters for Greedy Girl), we sat back and looked for a waiter to try to order drinks. We’d toyed with the idea of doing a wine pairing (one of the few dinners we have that don’t involve a significant trek afterwards back ‘home’) but opted instead for a bottle of champagne.

The Royal Mail is noted for its wine collection – including some of the world’s finest bottles. The wine ‘cellar’ (actually a building across the road from the hotel) holds around 30,000 bottles and the tour gave some great insights into French wines in particular. The premium wine pairing for our five course menu (which we were told would contain some extraordinary treats) was A$200 each. It was tempting, but we didn’t feel entirely comfortable in the dining room, so opted for a J. Lassalle cuvee preference brut premier cru, from Chigny-les roses near Reims. 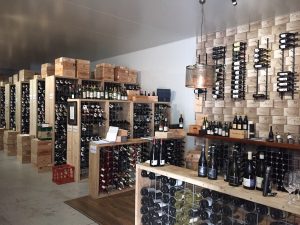 A snapshot of the wine cellar

Then came the next challenge – finding the bottle in the collection, which took a bit of time. In the interim, the staff kindly brought us each a glass of the house pour, a very nice Louis Roederer, while they located our choice. J Lassalle is a combination of the region’s three grape varieities – Chardonnay, Pinot Noir and Pinot Meunier. It’s a rich and complex champagne which, for champagne lovers, is a great option for multi-course meals. We were very happy with it.

And so to the food. First up was a selection of snacks. It was a little surprising, given we’d already had a significant conversation about food preferences, that these included both beetroot and oyster. 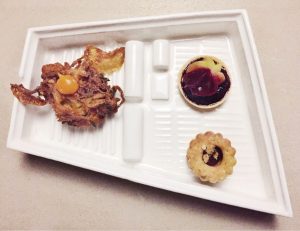 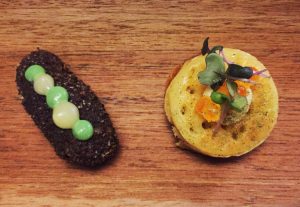 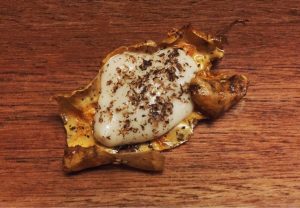 On the geometric plate above, clockwise from left is a wattleseed onion bhaji, a beetroot tart and a roquefort and quince ‘jammy dodger’ biscuit. Our very plesant French waitress pointed out that gluttonous husband would get an extra treat, hoovering up the beetroot Greedy Girl had ruled out. At the same time, we got a mushroom croquette topped with lemon and thyme jel, plus a home-made crumpet with celeriac, salmon roe and – for gluttonous husband – an angasi oyster.

As a replacement for the beetroot she wouldn’t eat, a further canape of crispy artichoke and truffle was provided. Of all the snacks, probably the bhaji had the most flavour. The croquette was interesting but none of the mushroom dishes we had at the Royal Mail had much mushroom ‘oomph’. Still, it was a decent start.

The final snack was a nettle custard with scrambled eggs, with some crispy nettles on top, plus some toasted seeds. The seeds were a bit hard and the combination was OK. This was also served at room temperature and Greedy Girl was hanging out for a hot dish. 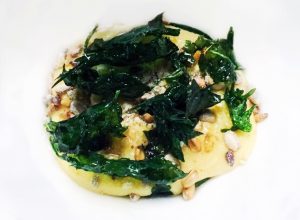 And so to the first of the dishes from the menu proper. We opened up with a pine mushroom and salt fish (we think we heard ling) brandade with leek. Again, this was OK. The best thing on the plate was the crispy leek crackers. 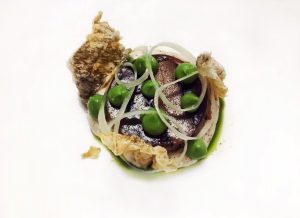 Fish featured prominently in the next dish – steamed King George whiting was presented in a roll with parsnip and kohlrabi juice. Greedy Girl thought her fish was a little dry and didn’t enjoy the kohlrabi flavour, thinking it too strong. She was also disappointed that there was no salty hit from the caviar. 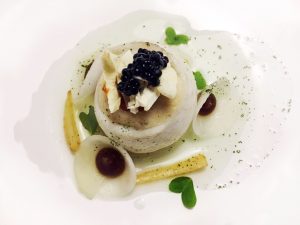 It was time for some meat. First up was great ocean duck with persimmon, artichokes and black cabbage. The duck was nicely cooked and had good flavour and was the definitely the best dish so far. 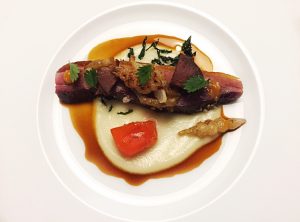 Duck with artichoke and persimmon

The replacement dish for Greedy Girl was a very pretty looking plate. This was hare loin, red cabbage, medlar and mustard fruit. At the start of the evening, Greedy Girl was asked what she’d prefer – a vegetarian dish or another meat and opted for the latter. This was a very gamey, very strongly flavoured dish and while it looked attractive, it was just too full on for Greedy Girl. Gluttonous husband very happily hoovered it up. 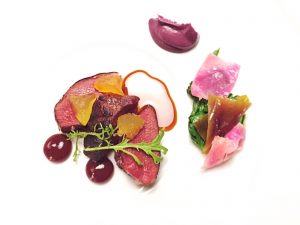 It was time for sweets. The pre-dessert was up first – a mixture of jerusalem artichoke puree with hazelnut and chocolate mousse underneath and some lovely crunchy toasted bits on top. This was delish. And so, hopes for the dessert proper were sky high. It certainly looked very nice. 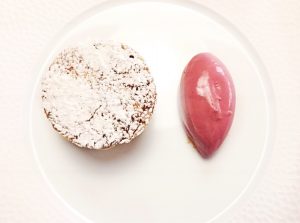 This was a take on a mince pie, with the main ingredient being fermented cabbage. Let’s start with what was nice – the brandy snap disc on the top of the pie and the berry ice-cream. The pie itself? Kudos to the chefs for trying something inventive, but fermented cabbage and dessert are words Greedy Girl hopes never to put in the same sentence ever again.

And we were done. Opting not to finish with a hot brew, we were brought out the petits fours – jelly baby vegetables. Cute. 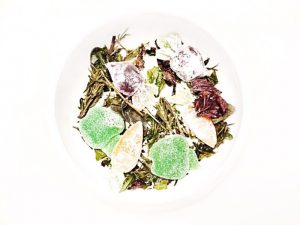 This was a perfectly acceptable meal, but had zero wow factor and, having thoroughly enjoyed Wickens’ food before, we had very strong expectations. Still, the restaurant was busy and there were lots of contented comments from other tables, so maybe our hopes were just unrealistic. Note to families – unless your kids are adventurous eaters, this is probably not the restaurant for them. There are no changes to the menu for younger diners and no price reduction. A table nearby with a boy who looked maybe 14 paid handsomely for the privilege of him eating the bread basket for the most part.

Having been blown away by Dan Hunter’s menu many years before, and impressed by the way the Royal Mail has developed, our fine dining experience left us wanting much, much more.

Wickens at the Royal Mail