We’ve travelled to the Thai capital six times in the past few years, staying in a number of five-star hotels from a variety of chains, so we feel quite entitled to weigh in on comfortable hotels in Bangkok.

This time we had a five-day stay using a Luxury Escapes voucher. Things started well with a pick-up at Bangkok’s Suvarnabhumi Airport – a one-way transfer included in the deal.

It’s always a bonus to have this in Bangkok, otherwise you need to have your hotel name and address printed out in Thai, ready for a taxi driver – and be prepared to negotiate on price.

Generally for hotels along Sukhumvit drivers ask for around 500 baht, which includes a number of tolls. You can probably get a bit cheaper if you want to haggle, possibly 400. Given 100 baht equates to just over A$4 we don’t worry about that too much.

If you insist on the meter it may be cheaper again but be warned – traffic in Bangkok can be absolutely fearsome and you may find yourself going nowhere fast watching the numbers tick over.

Anyway, our driver greeted us with the customary wai – hands together under the chin, a small bow and a hearty greeting. Get used to saying ‘sawasdee ka’ every time you walk into a hotel/restaurant/cafe.

And off we went in the midday traffic to an area of Sukhumvit we’ve traversed a lot but never stayed in, just near the Phrom Phong BTS station, around Soi 22.

The Marriott Marquis Queen’s Park is a big hotel – over 1300 rooms. It was previously known as the Imperial and underwent a huge renovation taking over two years, believed to cost over five billion baht. Its opening as the first of the ‘Marquis’ brand in Asia was December 2016.

It backs on to Benchasiri Park, as you can see from the picture at the top of this post. Since the back entrance to the hotel opened it’s much more accessible to Sukhumvit, the BTS and the nearby Emporium shopping centre.

The front entrance is on an alley (soi) off Sukhumvit and it’s an up and coming area with convenience stores and restaurants as well as the ubiquitous massage centres. Just be aware that it’s a crowded street, with few taxis passing.

There’s very little that is glam about most alleys off Sukhumvit. Some visitors find this a little confronting but it’s perfectly safe (as long as you pay attention to various bits of broken pavement).

Our driver dropped us off at the main entrance after a quick airport trip and in no time we were whisked up to the 27th floor to the M Club to check in, having booked a room with club access.

The lobby is huge and, as you’d expect in Asia, tests positive to crystal. 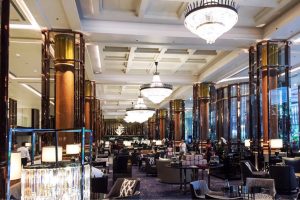 No shortage of crystal 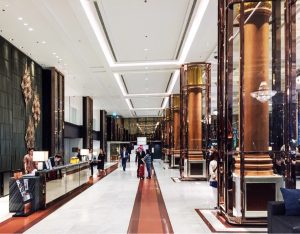 Our room was in the South Tower (along with the M Club) and we were a bit shocked to see how small the elevators were. Despite the big-ticket renovation, the air-conditioning doesn’t work too well in them either.

But the M Club is a bit of an oasis – and quite large, with a number of different seating areas, including an outdoor terrace favoured by the smokers. It needed to be big, as we found during our stay – it was incredibly popular. 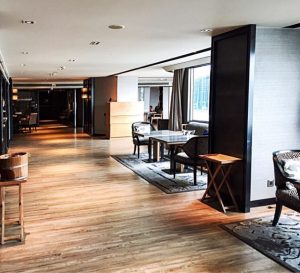 We checked in at lunchtime and found, to our delight, a cooked meal was on offer. Indeed, you had three choices of dishes prepared by the chef, as well as a host of soups, salads, sandwiches, fruit and dessert. 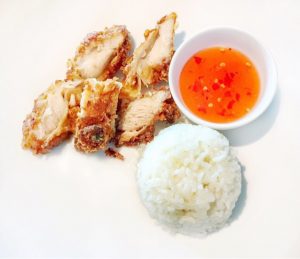 Apparently the hotel recently changed its offering from providing afternoon tea to lunch. We were invited to the manager’s cocktail reception one night; after complimenting him on the standard of food in the M Club, he admitted it was a bit of a quandary, with guests staying to eat there rather than trying the hotel’s restaurants.

Still, with such a big hotel, it’s nice to not have to find one’s breakfast among the masses. Children are permitted in the executive lounge but, for the most part, they seemed fairly well behaved throughout our stay.

And so the next five days unfolded. After we’d had a very enjoyable lunch, we headed up to our room on the 31st floor. If you’re tall, be warned – the ceiling heights near the elevators and in the corridors are quite low.

Our room was perfectly acceptable, with a comfortable king-sized bed and plenty of space around it. A great feature is USB slots to plug in and charge devices. 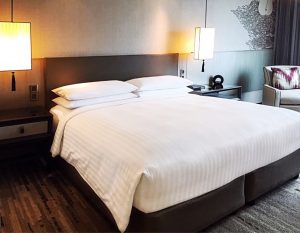 Our bathroom had a large walk-in shower but no tub. The toiletries were Thann – Marriott’s standard. Lighting was reasonably good and further illumination was available if you opened the sliding door over the vanity unit, separating it from the bedroom. 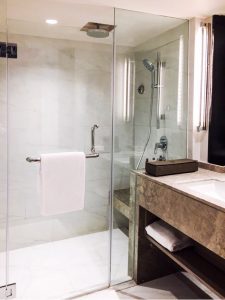 There are two pool areas – the main one on the 9th floor is next to a big, unadorned patio area and abuts a very good gym and squash court, plus the spa. The pool is possibly a bit small for the size of the hotel and sun lounges filled up very quickly. 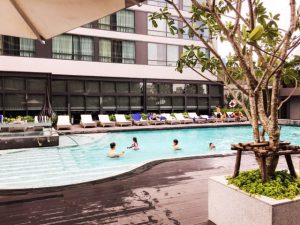 There’s another pool on the fourth floor and while we saw a few people sitting there, it didn’t look like the pool itself was in use – although that might have been due to the fact that it rained most days.

We did however, make good use of the spa. Our deal entitled us to a Thai massage each which was excellent (if a bit painful!) and I also had a great facial – which also included some massage. 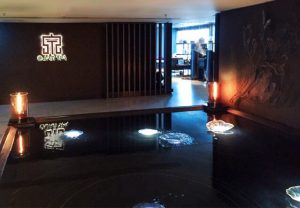 Apparently this is a popular hotel spa and appointments aren’t always easy to get.

But for the most part, we just enjoyed hanging out in the M Club. The standard of food was consistently good, we had plenty of variety, and the delightful staff really looked after us – especially with the evening cocktails. 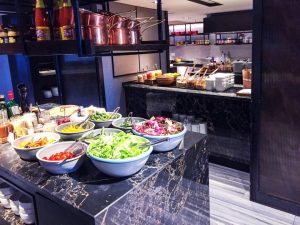 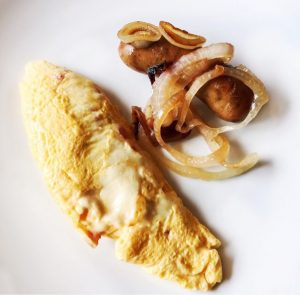 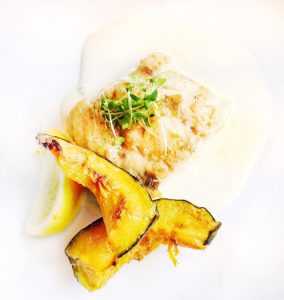 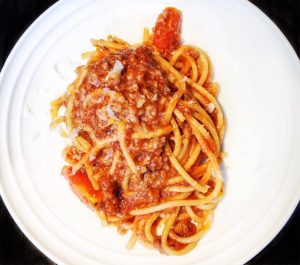 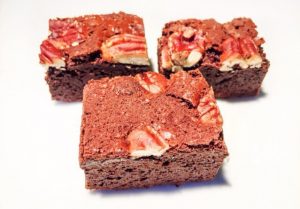 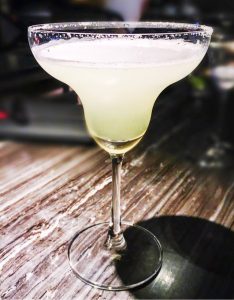 Having stayed at the flagship JW Marriott, we’re more than happy to recommend this as definitely one of the most comfortable hotels in Bangkok. It’s in a great location, the park is great and there’s plenty of action nearby. Proximity to the BTS station also helps if you’re trying to avoid Bangkok traffic.