Whether it’s the arrival of new facilities such as the JW Marriott but it seems loads of five-star hotels in Singapore are undergoing renovation – such is the case with the Conrad Centennial Singapore.

While we had a fully renovated room, there are significant areas of the hotel that are being worked on as this post was published, including the executive lounge and spa.

The view from the room was quite nice – we could see the giant Singapore Flyer and the Marina district. On a high floor, we were slightly bemused at the amount of external noise at night, but the rest of the room was reasonably comfortable.

The decor is modern but the approach to furnishing a bit unusual – low couches featured along the whole wall next to the windows. It seems an odd use of the space.

There’s a large round table, but still enough room to walk around the bed. We didn’t use the couches to sit – that’s where our suitcases ended up. 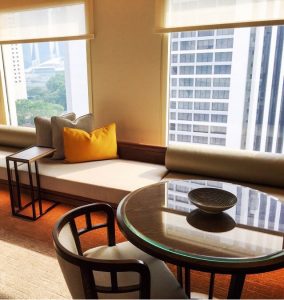 Table and sofas next to the windows

The Conrad Centennial Singapore has a cute way of trying to make you engage with their eco-friendly requests. 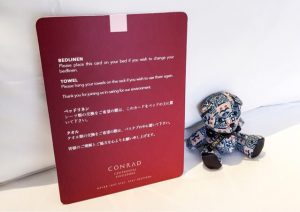 Teddy bear on the bed

There’s plenty of hanging space – it even passed the long dress test, which is rare. 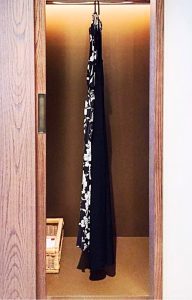 The marble bathroom was reasonably well appointed with decent benchtop space and a large walk-in shower. 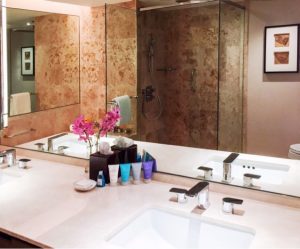 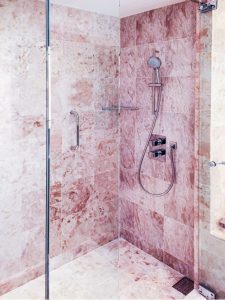 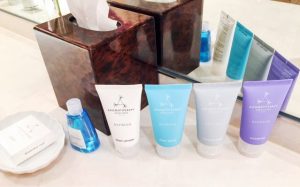 We had breakfast in the main restaurant downstairs; it’s a large hotel and the selection at breakast is quite good – much larger than that available in the executive lounge, although the latter was a better option to sit and relax over a coffee.

The club lounge has been part of the hotel’s renovation project. It was somewhat lacking during our stay, with evening drinks not refrigerated before service and put on ice way too late (warm sparkling wine anyone).

Food and spirits also weren’t replenished promptly leading to some fraught conversations with the staff. The lounge was also quite small and got very crowded very quickly.

As part of our package, we were also treated to a meal at the hotel’s Golden Peony restaurant – this was exceptionally good.

But generally we were a bit underwhelmed by this hotel. It’s always hard to get a true feel for somewhere that has temporary facilities during a renovation, but even the renovated rooms didn’t have any real wow factor.