An Asian institution, there’s a plethora of options for Sunday champagne brunch in Hong Kong. We headed to the Mandarin Oriental in Central – a hotel chain noted for its upmarket food – with high expectations.

The Sunday champagne brunch is served between 12 noon and 3pm in the Clipper Lounge, on the mezzanine floor of the hotel. The space is open to the lobby below and, as is the norm in Hong Kong, there is loads of crystal, plush furnishings and marble. 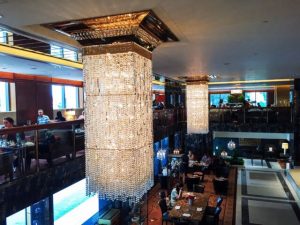 But we were there to dive into some spectacular nibbles, washed down with Veuve Clicquot champagne. Sitting down  just before 12, the champagne was immediately poured but we were told not to approach the buffet until the clock struck the hour. All good.

In terms of food there are plenty of the usual suspects here – sushi/sashimi, seafood (including three types of oysters) and a carvery, but also some welcome additions.

One very welcome sight was the picture at the top of this post – loads of mini steamers containing a delectable array of dim sum. The har gow (shrimp dumpling) and siu mai (pork dumpling) were particularly delish – and here they are. 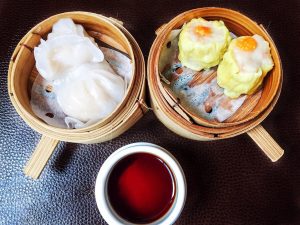 These were possibly the most refined and tastiest dumplings Greedy Girl has ever sampled – and she’s had way more than her fair share over the years. Yum.

But we’re getting ahead of ourselves. The champagne glasses kept being topped up from magnums of champagne (there’s the option to have rose if you prefer) and we headed for our standard starters – oysters for gluttonous husband and a mix of sushi and sashimi for Greedy Girl. 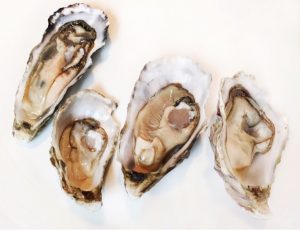 Gluttonous husband took two of his favourite Fine de Claire oysters, plus one from Brittany and another labelled ‘Scottish Rock’ – that’s the large, narrow one on the left of the picture above. As usual, the smaller, sweeter varieties were his favourites.

Greedy Girl, always a huge fan of tuna, has got into sashimi salmon in a big way. 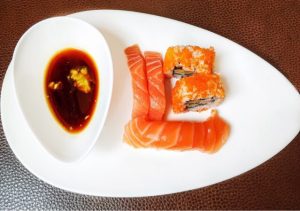 The salmon was absolutely stunning, whether in sashimi or atop some splendid sushi rice. The rolls coated in salmon roe were also delightful.

But gluttonous husband persuaded her to give the tuna a try. There was such a big array, it was easy to fill another plate. 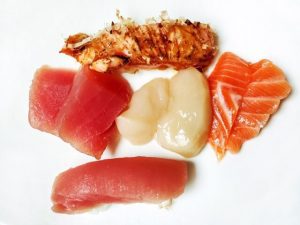 We took tuna sashimi and a piece of sushi, some roasted salmon sushi (at the top of the picture) and some sashimi scallop, plus a couple of extra pieces of salmon sashimi.

It all looked wonderfully appetising but the tuna was a let down – it paled in comparison to the flavour of the salmon. The scallop sashimi was also much more flavourful.

And so we wandered around the stations. The brunch here also has breakfast staples, including a station where eggs are cooked to order. In other brunches we’ve been to, the egg station has been a bit more exciting – eggs benedict with some interesting sauces – but this was just standard.

The seafood station had some whole fish, as well as some shelled prawns and lobster tails. Gluttonous husband tried the fish and pronounced it moist, with good flavour, but the seafood looked a bit on the dry side.

Greedy Girl, filling up on dumplings, decided to try some other forms of protein and took some plump lamb chops and a pork sausage. 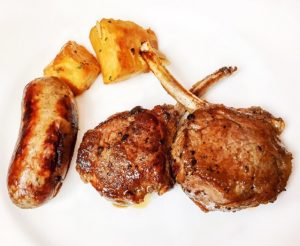 The cutlets were well done – still very pink and quite tender. The pork sausage was also very tasty. Next to the bain marie containing the cutlets were roasted sweet potato. These were completely disappointing – quite cold, with a poor texture and flavour.

We also sampled the carvery, served up a huge slab of very pink roast beef with a light gravy and helped ourselves to Yorkshire puddings. The meet was soft and tender and gluttonous husband enjoyed it immensely. Greedy Girl was less of a fan. The Yorkshire puds were like cardboard. A sad note.

Gluttonous husband also decided to sample some Asian delights. He opted for a dish of pho and commented the beef was excellent but the broth didn’t have any wow factor. 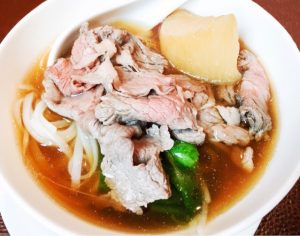 A steaming bowl of pho

There was also a station for chicken rice. Greedy Girl still struggles to understand the Asian fascination with this dish. It was rather mundane. 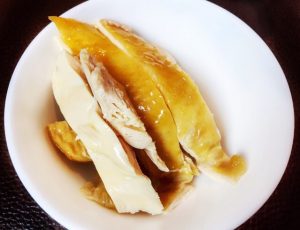 On many occasions when we’ve enjoyed a Sunday champagne brunch, we’ve looked forward to the dishes that get passed around the tables. Only one option was available (or so we believed, we weren’t given any real information by the wait staff) and that was a fillet of wagyu beef atop light jus.

And here it is – looks the goods! 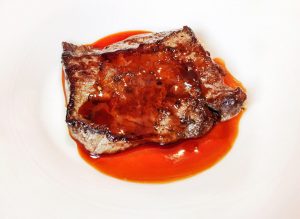 Sadly, it was seriously overcooked. Gluttonous husband tried to get to pinker meat inside but left this on the table.

As Greedy Girl headed for the dessert table, gluttonous husband was delighted to spy a big wheel of reblochon, our new favourite cheese, and helped himself to a liberal slice.

The dessert selection is comprehensive. Greedy Girl took a range of chocolatey things, including a sea-salt tart. The best thing on this plate (below) was the brownie. The other elements were OK but nothing to rave about. 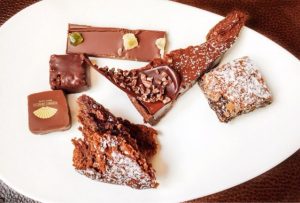 In search of more of a chocolate hit, we scooped up a small container of mousse – this tasted more of caramel than chocolate. Hmmm. 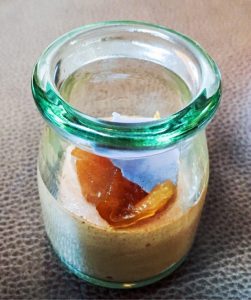 And to finish, Greedy Girl ordered a double espresso. It was drinkable but again not of the standard she would have hoped – and expected of the Mandarin Oriental. 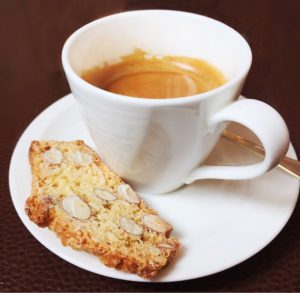 And we were done. For the most part, the champagne was poured regularly but the problem with using magnum bottles is, when the supplies run low, bringing new magnums and putting them into an ice bucket mean the champagne isn’t really cold enough – not ideal on a hot Hong Kong day.

We were told we could keep our table until 3.15 – the Clipper Lounge then transforms into serving afternoon tea.

This was an acceptable Sunday champagne brunch but not a particularly memorable one, except for the quality of the dim sum and the sushi. Given the brand’s pedigree, the expectation was for much, much more.