Where to eat in Cusco – Chicha por Gaston Acurio

Our standard operating procedure when travelling is, where we find good food, we ask where we can find more good food. With a stellar tasting menu at Astrid y Gaston in Lima, we enquired about our next stop – where to eat in Cusco. We were surprised that the waiter shook his head and could offer no suggestions.

Given chef Gaston Acurio is as close to a culinary god as there is in Peru, he has a number of establishments in Lima and dotted around the country. It was only when chatting to our friendly driver from Cusco Transport on the trip in from the airport about where we could have an enjoyable lunch, that we found out about Chicha.

This is another of Gaston Acurio’s outlets, on a square in the historic centre of Cusco. We dropped our bags at the hotel, drank some Coca Tea to try to acclimatise to the fearsome altitude (Cusco is at 3400 metres above sea level) and walked, slowly, to lunch.

Even if you’re young, fit and healthy, altitude sickness doesn’t discriminate, so treat it with respect. Slightly dizzy and headachey, we fended off the hordes of locals trying to sell us necklaces, watercolours and massages (at least they get points for different street offerings) and sauntered towards the restaurant.

Thankfully, the route within the centre of town is fairly flat. Don’t count on that being the case anywhere else in Cusco which is, well, mountainous. Locals no doubt keep fit enough just heading to and from their homes, capering as sure-footed as mountain goats on the steep, cobblestoned streets.

Chicha is on the first floor (or second if you count ground level as floor one) of a colonial building that also houses a hotel. The signage is fairly subtle but you enter the hotel courtyard and head up the stairs to the right. The restaurant is a large, long room with picture windows looking out on the square and the surrounding mountains.

It’s a fairly spectacular spot (to which, sadly, photos don’t do justice) and even more so when a booming thunderstorm rolls through, reverberating on the hills. 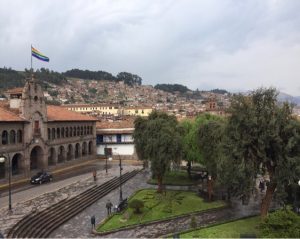 We thought we were quite late for lunch after our flight from Lima, but a steady stream of patrons followed us through the afternoon. The style here is quite casual, except on the plate, which looks incredibly intricate.

Greedy Girl, still reeling from the altitude, sipped water while gluttonous husband tried a couple of Cusquenian beers and we quickly settled on food.

True to Gaston Acurio’s approach to cuisine, Chicha showcases local produce. While there is plenty of choice on the menu, vegetarians and vegans might have a few issues with some items – including those we chose. There are plenty of cute and cuddly critters that feature and are, well, delicious.

First up for Greedy Girl was the dish featured at the top of this post – carpaccio of alpaca.

Wow. They say you eat with your eyes and this was a spectacularly pretty dish, served with ‘Andean’ pesto. It was a magnificent array of flavours and textures. The alpaca was incredibly soft. Delish. 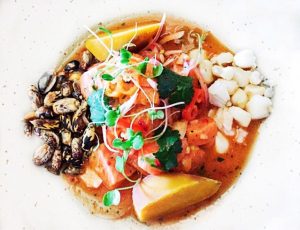 This apparently is a typically Cusquenian dish, served with corn and sweet potato and mote – a different treatment of corn. It had a spectacular texture and a great combination of flavours – just enough tang and spice. Gluttonous husband was well pleased.

The fried corn on the left of the plate is something you see a lot of in Peru. Greedy Girl acquired quite a taste for it, although it has to be said, corn and potato tend to be served with pretty much everything in Peru and it can get a little dull on the palate.

Next up were our mains. Gluttonous husband took guinea pig or ‘cuy’ as it is known in Peru. 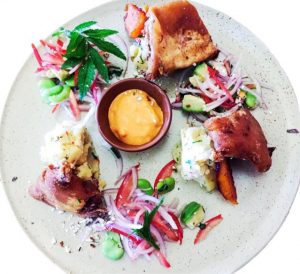 It should be pointed out here that Peruvians don’t keep guinea pigs as pets. To them, it’s a species of rodent and a rather tasty one at that. This dish had plenty of crispy-fried guinea pig which tastes like a gamier version of chicken (yes, seriously).

But it also had a lot of other elements – two types of potato for a start (sweet native potatoes and a crushed version) plus what was termed a ‘creole’ salad. It didn’t need all the whistles and bells. We’re not quite sure what the sauce in the bowl in the middle of the plate was but gluttonous husband described it as ‘a bit weird’ and he didn’t use much of it. 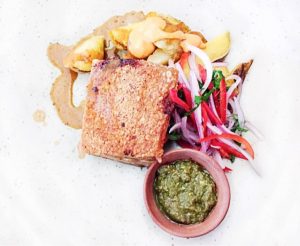 This also had a creole salad (red onion, tomato, coriander and other herbs in the main) plus fried potatoes and a couple of different sauces – a style of pesto and a jus.

Elements of the dish were very good. The pork itself had a nicely cooked layer of fat giving it moisture but the crackling was virtually inedible. It was incredibly hard – too hard to cut and tooth-shatteringly difficult to chew. Sadly most of it stayed on the plate.

Greedy Girl didn’t mind the pesto but gluttonous husband didn’t think it went with the meat. Still, it was a hearty plate of food.

No room left to contemplate dessert (although we did see some of the same outrageous-looking sweets that were also on offer at Astrid y Gaston in  Lima), we asked for ‘La cuenta’ and headed into the afternoon, feeling a little less the worse for wear and a fraction more used to the dizzying heights of Cusco.

There are no shortage of choices when it comes to where to eat in Cusco but we were happy to experience something that was both creative and reasonably enjoyable. If you’re spending a few days in the the capital of the ancient Incan empire you could do a lot worse.