While we tend to spend our money on fine dining, we’re always on the lookout for bargains to give us a night off from cooking. Given the number of eateries here, it’s hardly surprising that there is a plethora of Melbourne restaurant deals.

So, when one came up around Valentine’s Day (sorry for the late posting but we have been on the road), a short stroll from Casa Greedy Girl, we jumped at it.

Docklands is still regarded as a relatively new development on the western fringes of Melbourne’s central business district. Apart from alongside the river, it’s the only waterfront precinct the city has to offer.

While it doesn’t have the greatest reputation on a few levels, some of the criticism is absolutely not deserved. Yes, Docklands can be windswept and, in some areas, tricky to drive to and find a parking spot.

But the people who dismiss it as a soulless concrete jungle are way off the mark. It’s a great place to live and an easy walk into the city and beyond. We love the lifestyle.

Food options, however, are definitely hit and miss, particularly at the northern end of Docklands along Newquay Promenade.

Still, buoyed by optimism, we strolled along Harbour Esplanade one recent evening ready to have a three-course meal with a complimentary bottle of French sparkling thrown in for A$89 for two people.

Some of the restaurants at Newquay are on the water and it’s quite a pleasant vista. Oscar’s Table isn’t waterfront; you’ll find it under one of the big apartment towers lining the promenade.

First impressions aren’t exactly inviting. We’re met with a scowl as the team member tried to find our name on an iPad. After showing our voucher reference, we’re eventually shown to a table inside.

The decor is interesting. Big lamps seem to be made from pages of a book but that’s where any attempt at providing a unique atmosphere begins and ends. It reminded Greedy Girl of a typical seaside cafe of her youth – designed to get families in, feed them, and herd them out.

Still, our table is large enough to sit side by side and the French bubbles provided without delay. And here it is: 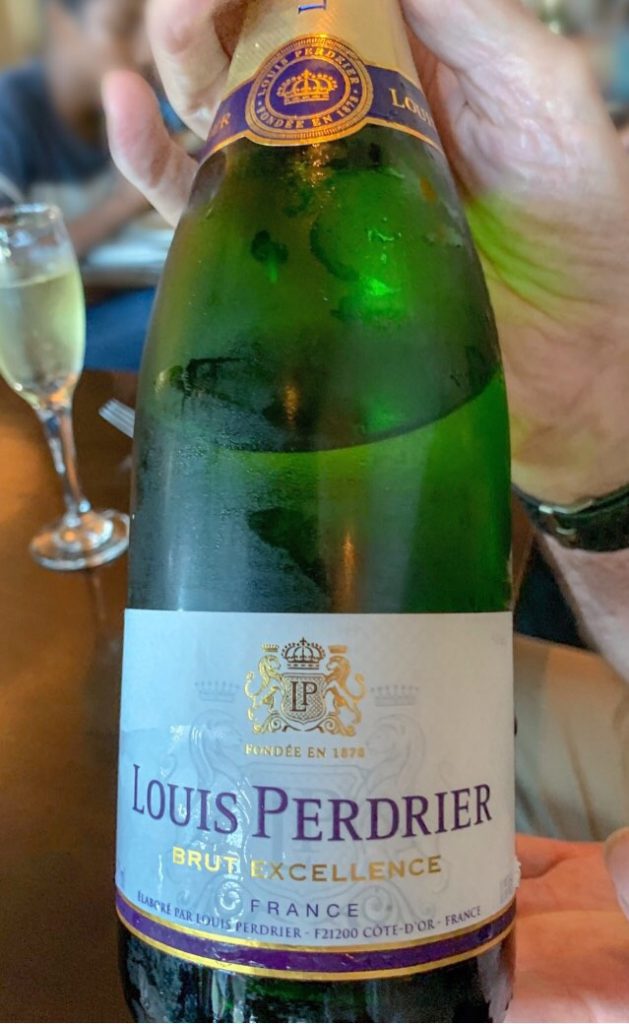 This retails for around A$14 a bottle. At home we regularly drink Veuve Amiot, a citrusy French sparkling from the Loire Valley which you can pick up for a similar price point. The Louis Perdrier was perfectly drinkable.

The special offer menu was a seafood platter to start, followed by a choice of main and dessert. The restaurant prides itself on Spanish and Mexican influences.

Our set menu had few of those touches but we did see some sizzling fajitas taken to various other tables.

First up was the seafood platter. We expected this to come out as one dish but it was plated individually. It consisted of a Coffin Bay oyster, smoked salmon timbale, prawn cocktail and ‘grilled’ calamari, served with bread.

As you can see from the picture at the top of this post, it was quite a nice-looking selection. The calamari was tender, although there was no ‘grilled’ flavour and the smoked salmon excellent. Gluttonous husband relished the oysters (he got both).

The ‘prawn cocktail’ was essentially a couple of mid-sized prawns topped with spicy cocktail sauce. They were tasty, although the sauce seemed a bit watery. Still, as a starter, it was more than acceptable.

We moved to main courses. Greedy Girl had steak. 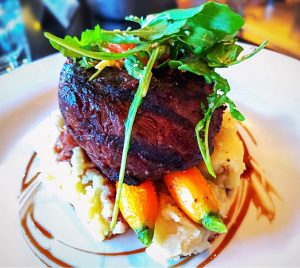 This was a rather large Angus eye fillet. Greedy Girl asked for it to be cooked medium rare and it was pretty much spot on. It was served with garlic crushed potatoes, roasted baby carrots and a port wine jus.

Everything on the plate was appetising, although there wasn’t much sauce. Still, it went down a treat. In any Australian restaurant, you’d easily pay $40 for this quality of meat, making the cost of the coupon quite a good deal. 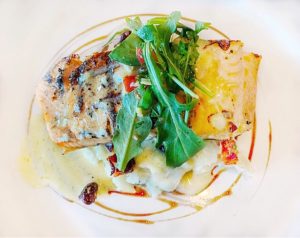 This was a salmon fillet served with beans, garlic potatoes and what was nominally a ‘banana butter’ sauce. The fish was cooked too much but the flavours on the plate all worked together quite well.

We asked to finish our champagne before dessert arrived and the nice girls who looked after us were happy to oblige. No-one really engaged with us but that was OK for what we were about. 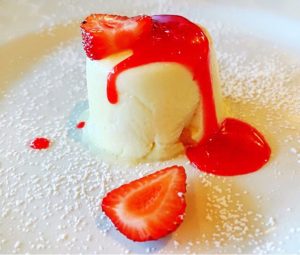 Again, it was perfectly edible and not overly sweet. The fresh strawberries and the coulis were a nice touch. 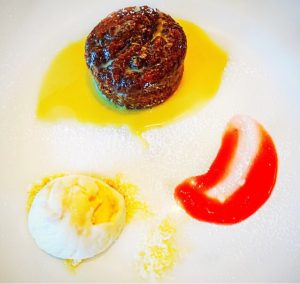 As you can see from the picture, there’s not anything that remotely looks like a churro on the plate. There were some biscuit crumbs but that’s about as close as it gets.

But, the pudding itself was quite decent and gluttonous husband enjoyed the ice cream.

And we were done. Off we headed into the twilight to wander home.

For the quality and quantity of food, this was a pretty good deal. Melbourne locals and visitors should note that the restaurant has these coupon offers on a fairly regular basis.

But in the absence of a deal, would we return? That’s unlikely; the food was fine but nothing had a wow factor. Indeed there was nothing we wouldn’t make in our own kitchen and possibly be a lot happier with.

Still, it was worth venturing out as an adjunct to our usual Valentine’s tradition of a crayfish at home accompanied by a splendid bottle of Leeuwin Estate Art Series chardonnay from Margaret River in Western Australia.

Given it wasn’t actually February 14 when we sallied forth, we missed the enforced romance and the disinterested staff who look like they despise working on that particular day.

Did we get a glimpse of Spanish/Mexican specialties? Not at all. And that’s possibly the biggest shame in not getting to sample really what the chefs are all about.